Finally, a progress post. I’m sorry to say that recently I’ve been a bit lazy when it comes to the photo taking aspect of documenting my work, so there shall be more text then photos.

My first thing to fix was on the skirt, though I was pretty happy with the ruffly-ness,  it had deflated a bit. Luckily the solution for this was really simple: Get a petticoat. And to make it even better, I already had a petticoat that would work perfectly. This particular one is from leg avenue, and cost around $9 on ebay auction, it’s really fluffy and short which makes it ideal for supporting the ruffly mass of bridal satin that is my skirt.

Here is an example of the effect it gives.

I still need to add a zipper and tack bits down, but I’m pretty happy with it so far!

Next up was remaking a part of the costume  I wasn’t happy with, the shirt. The one I made originally was quite scratchy and just didn’t fit right. Plus the sleeves were a little too poofy for my tastes. So when I was in the city this past weekend I picked up some lightweight cotton jersey and whipped this  together.

I referenced one of my regular sleep wear shirts to get a basic idea, but I made sure to leave 4” on each lapel so I could add interfacing and support for the buttons. This all went together really quickly and easily, within 2 hours I had myself a comfy shirt.

Then it came time for buttons, I quickly learned buttons are far more fun to play with then to actually sew on…. “RAWR!”

In total I purchased 138 buttons- all of which will be used on this costume.

And here they are sewn on! I think it looks pretty snazzy at this point, It still lacks a collar and the bottom edge is unfinished, but I think it looks good. I’ll draft up the collar later tonight or tomorrow and get that finished up. I don’t think it will be too difficult. *crosses fingers* 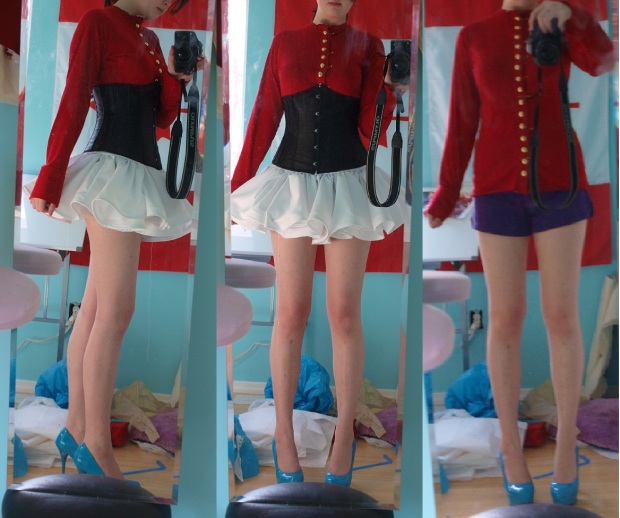 The jacket is easily the most difficult part of the entire costume, and it’s also a part I messed up on several times. My first attempt wasn’t *too* bad, but it had so many issues that were impossible to fix. I decided remaking it would probably be faster and look much better.

Here is the first attempt, as you can see, it never even got finished.

I’m much happier with my second jacket attempt, the fabric is a bit thicker and lighter in color. Which makes it nicer to work with and more pleasing in texture. A lot of it is still pinned, which is why it looks a bit lumpy, but that should go away soon enough. 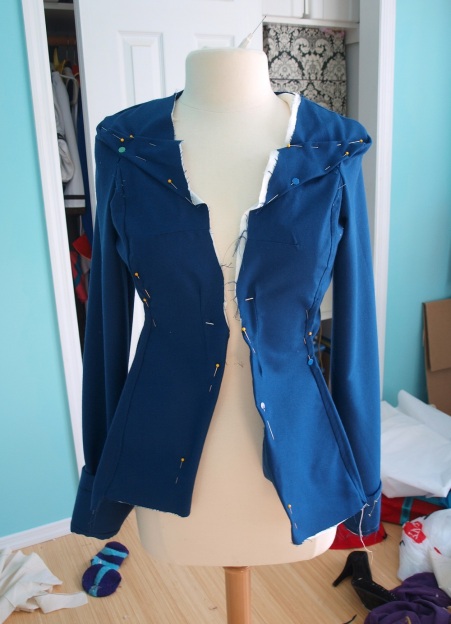 Sorry for the mess D:

Then it came time to make the jacket collar and abuse it with 50 someodd buttons.

My wig also arrived, but unfortunately i’m quite unhappy with it. I’m going to try and get a new one as soon as I have enough money to do so. 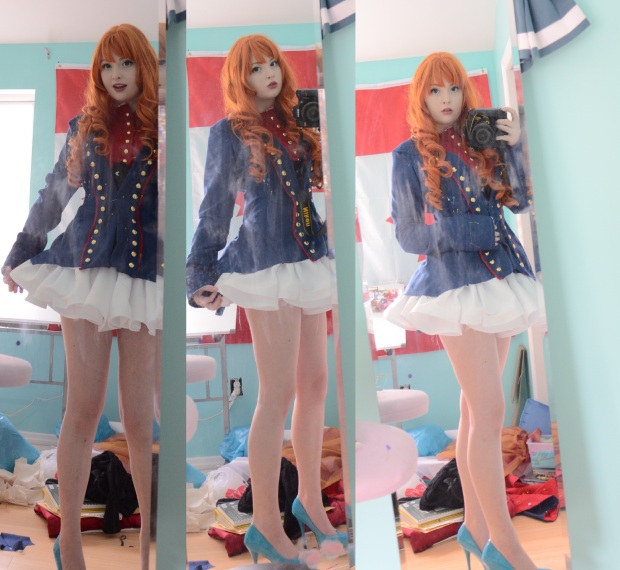 And my mirror needs cleaning ^^;

And here are how my boots are coming along! I got the base shoe for $20 at famous footwear, but unfortunately they lacked a cuff and the signature buttons. But with a bit of creativity this issue was resolved.

They aren’t 100% done yet, the cuffs are just pinned at the moment. But i’m pretty happy with how it’s going!

And I guess that’s it! I’ve kinda been juggling  three projects, so progress hasn’t been very speedy. Hopefully i’ll have more to post soon.