Alas this costume is complete! Unlike my other project (which I shall blog about later) this costume has been a joy to work on. Usually simple designs don’t keep me interested, I get tired of them very quickly and my work becomes sloppy and rushed. This happened when I was making Mizore and I was really worried it would happen again with Merida.

Luckily, that was not the case at all. I really enjoyed making this and I actually really like wearing it too! It’s comfy and easy to get on/off, plus it’s actually flattering – quite the rarity in my cosplay closet.

Anyway, On with the post! If you missed the previous post on this costume you should read it here.

There wasn’t a lot left to do on the dress. All it really needed were ruffles and a good hemming. The first of which proved to be a bit more time consuming then I would have liked.

I cut strips of chiffon, folded them in half, and top stitched the fold. 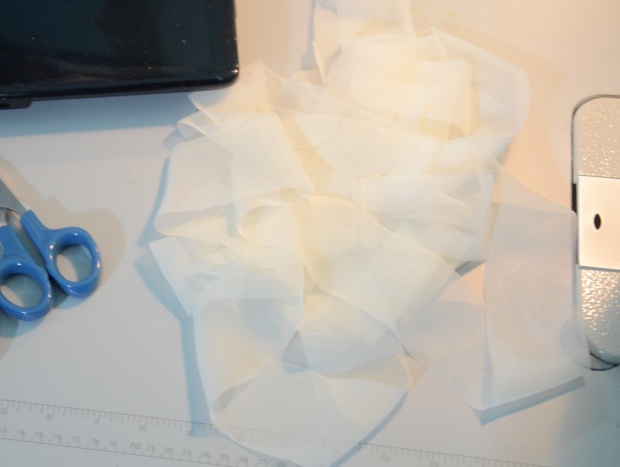 I used the tension method of gathering, which works really well on lightweight fabrics. All you have to do is set your tension as high as it’ll go, and set the stitch length to the longest length. Then you sew and enjoy the perfect ruffles.

Some of these got sewn onto little strips of wool which got hand sewed into the sleeves. 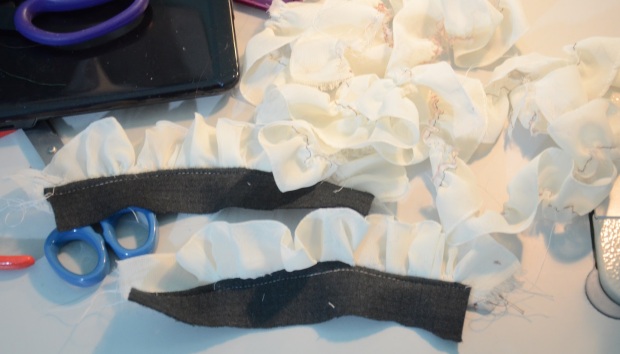 The others would later go onto the neckline – but first I had to cut the neckline! I did this by putting on the dress and drawing it out with dressmakers chalk. Then I measured out and cut the “V” I cut a rectangle of muslin which would fit beneath the V. Then that rectangle was covered in chiffon that had been gathered on each edge.

If that doesn’t make sense go back to post #1 – it’s the same method I used on the sleeve poofs!

That got pinned into place… 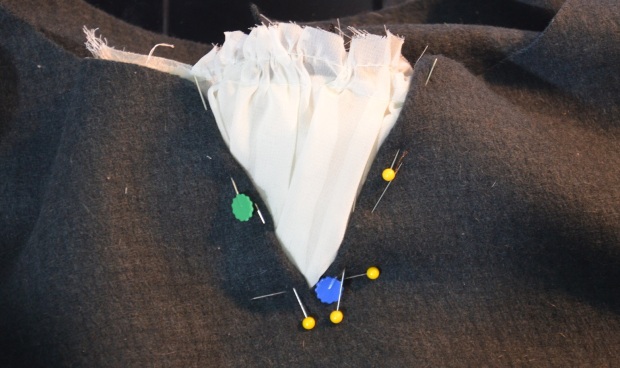 And sewn! I later cut off the edges. 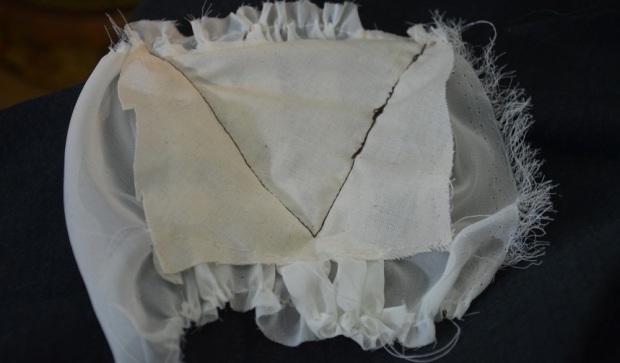 Then ruffles were added to the neck. The bottoms of these were sealed with nailpolish to prevent fraying. 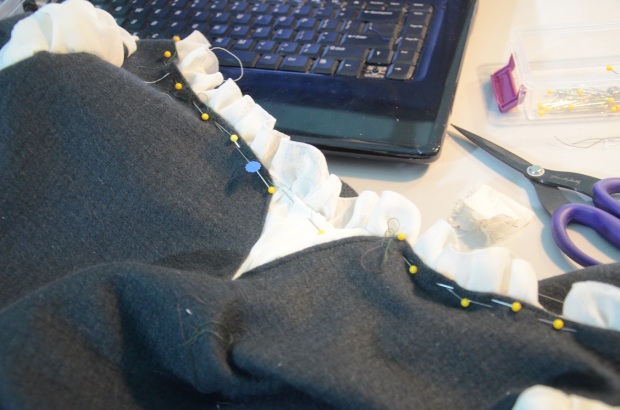 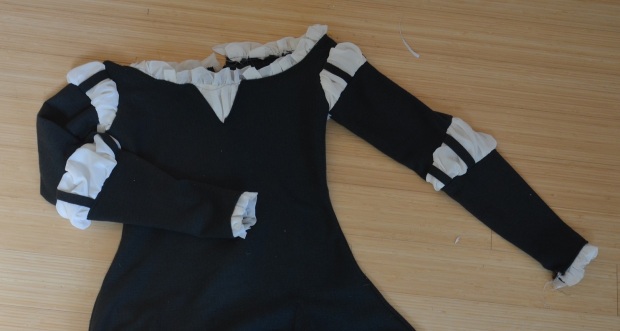 When it came to the lacing I used some cream colored cording I had laying around, a VERY large needle and pliers. I measured out where each hole should be and worked the needle through each one. This was really annoyingly difficult and I would not recommend it – but I personally think it looks better then grommets so I guess it was worth it. 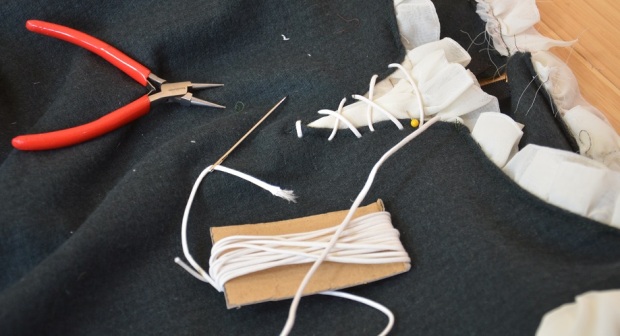 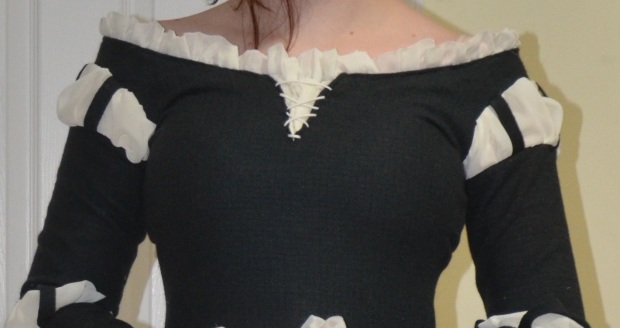 Moving onto the cape! I thought this would be really easy, but I struggled with the pattern. Unlike most cape patterns, I didn’t want mine to have a seam down the center of the hood. I wanted it to be three pieces.

I quickly learned these do not exist and are a pain in the ass to draft. Made more challenging because you have to account for a GIANT hairstyle that needs to fit in said cape. 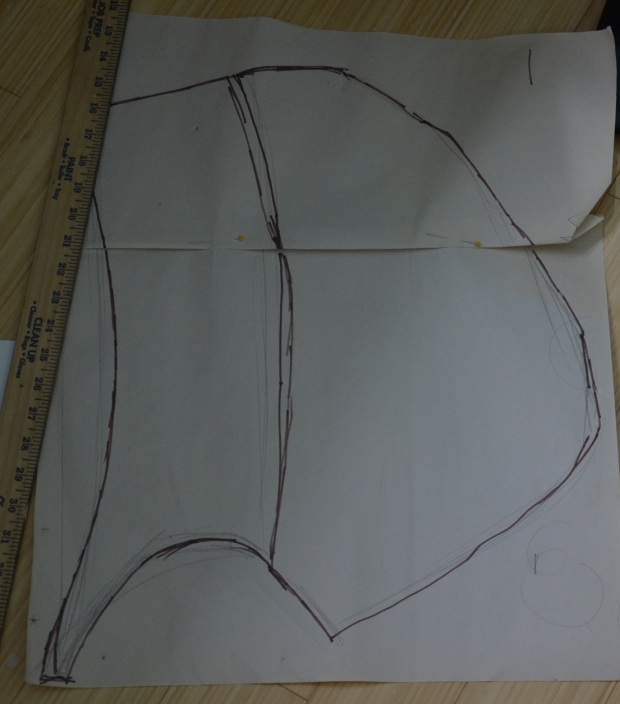 The piece on the far left is my lining. The back seam has a french seam. 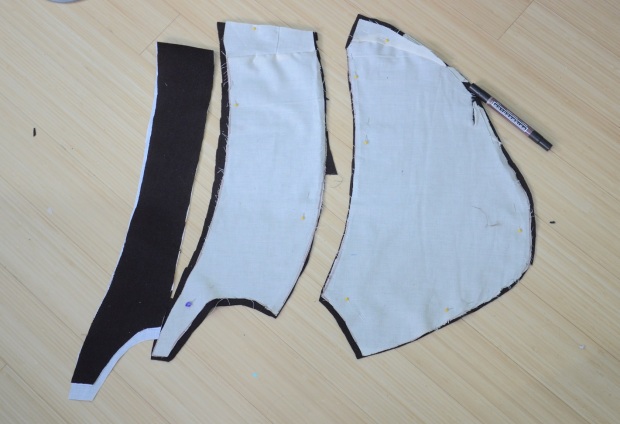 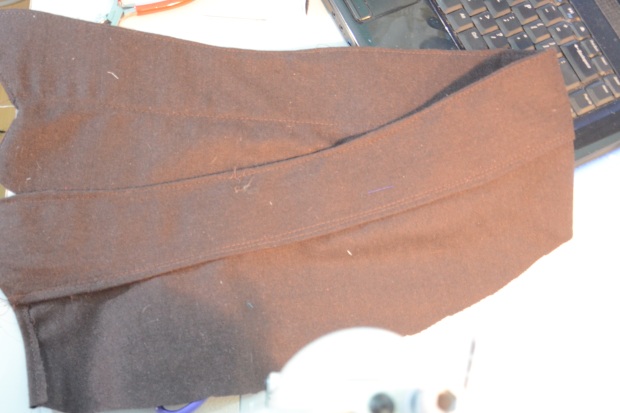 The actually cape part is a half circleish sort of shape that was double hemmed on each side, the top was gathered by hand and sewn to the inside of the hood. 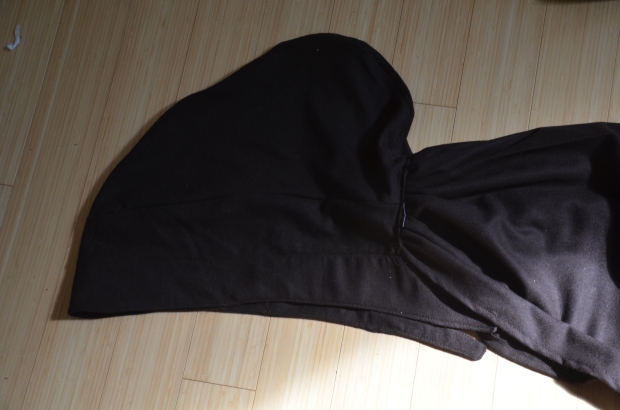 This cape also doubles as a dog bed so that’s pretty cool.

And in the end it looked like this! The hood is pretty floppy here because I don’t have a giant head of gingery locks like Merida. 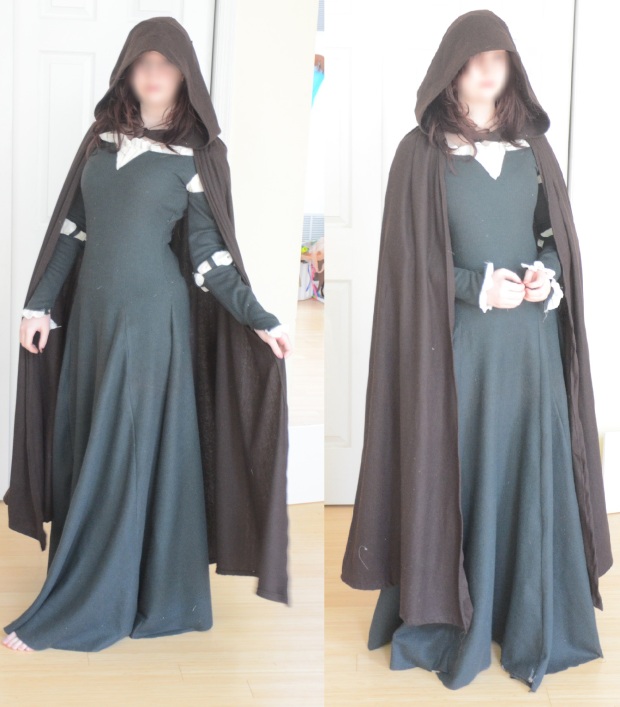 This pile of hair arrived for me! 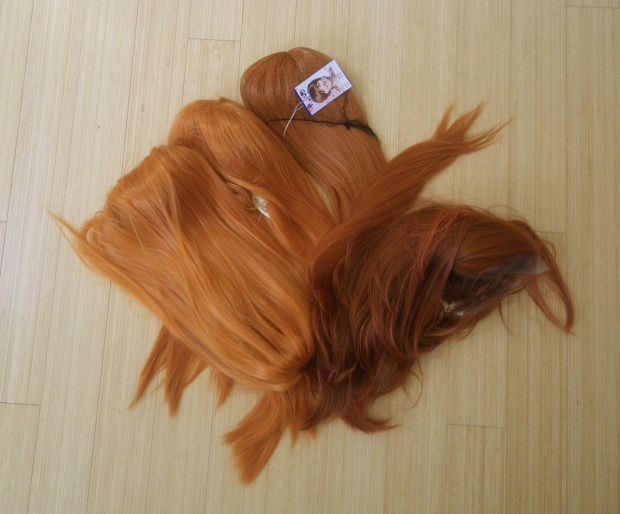 What you see there are four wigs.

This is the base wig – which I dyed to match the other wigs I used. And one of these, and two of these.

Those links will probably be dead in a few weeks so here are pictures. At the time I ordered these they were all on sale and I think in total I spent $65ish. 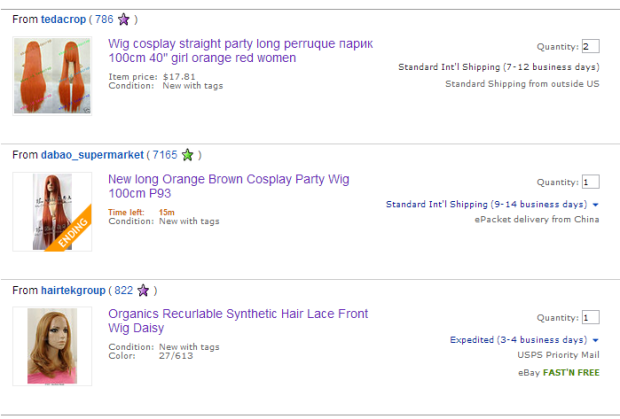 So the three long (100cm) wigs were turned inside out and seam ripped apart! 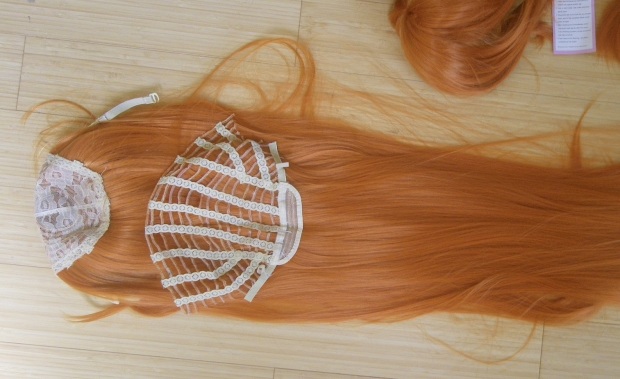 Each weft was sewn to another weft, making them twice as thick. 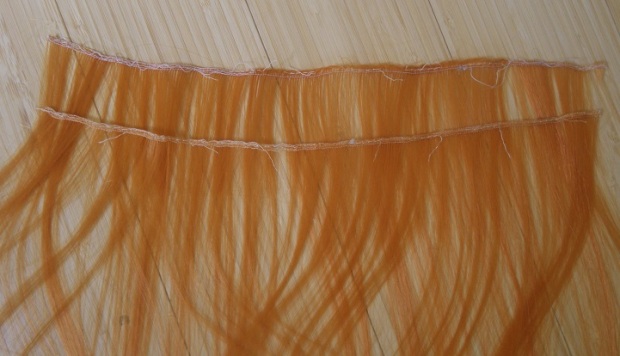 Then I laid them all out on a towel and used alcohol dye to make the roots and certain strands darker. I brushed the dye on with a large paint brush, and after a few days I washed each weft.

My entire bathroom floor was covered in hair. 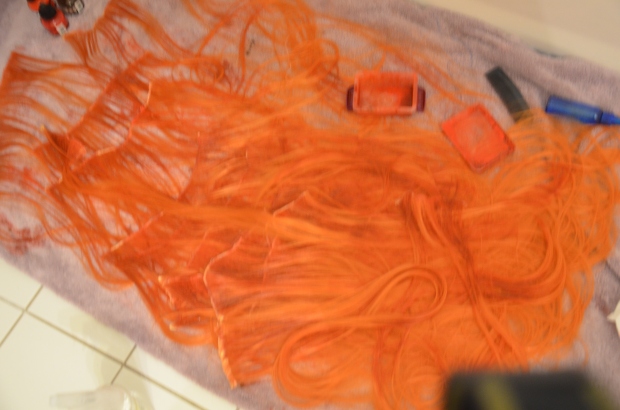 The “base” wig has a lacefront which makes it look more natural. Sadly this wig did not come in orange, so it got dyed via the spray bottle method. Each strand was heat sealed before I rinsed it. 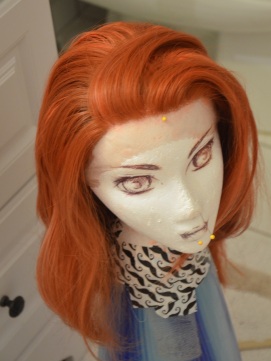 And then I started sewing the long fibers onto the lace front wig. SO MANY PINPRICKS. Dear got it was miserable, but you know what was worse? Curling it. My fingers still hurt. They still burn.

I honestly wish I had more photos of this process, but it’s tricky to photograph. The curling process especially since it requires both hands and  has to be timed to the second (otherwise the wig melts, yeah, fun.). Also my hands were orange from the dye so it was a big mess trying to wash them! Plus in my bathroom lighting the wig photographed as a big orange blob.

Here we are maybe 1/2 done. With a lovely shot of my bathroom floor (wefts that still had to be sewn in. 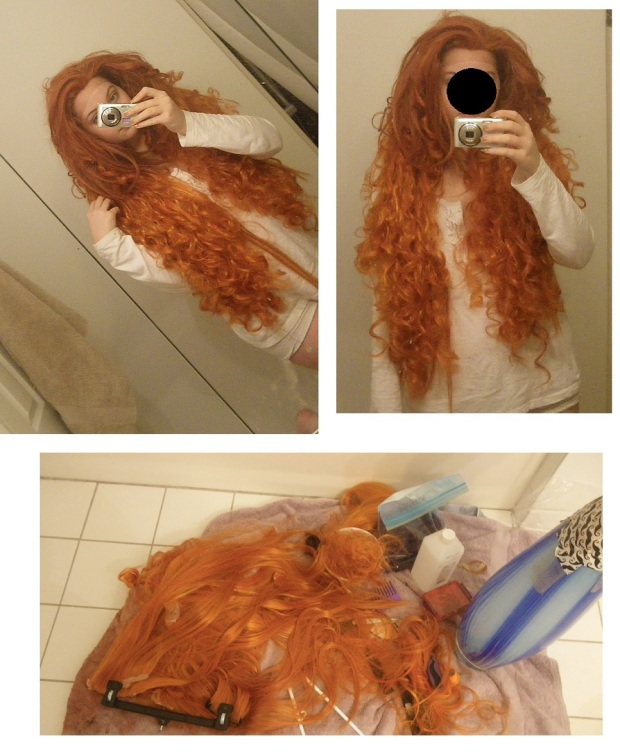 And here we are two nights later! After another five hours of work (and a ‘Say yes to the dress’ marathon) it was almost complete! 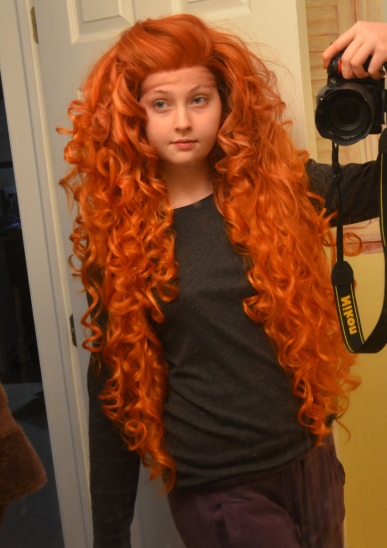 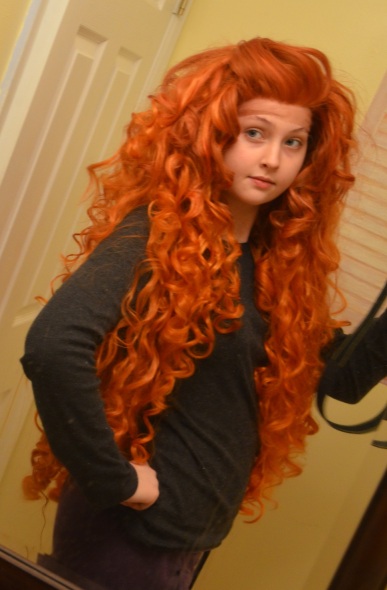 And then the next night the bangs got styled and I could proudly say it was DONE! This beast took longer to make then the costume it’s self did. If I had to guess I would say it took 12-15 hours. Crazy. 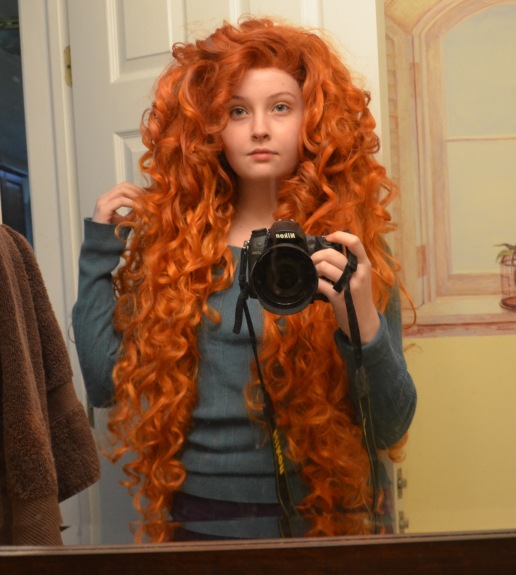 Today I did the very first makeup test, which I actually filmed since people on tumblr were curious. The makeup is pretty boring and straightforward – I kept it natural since a lot of makeup goes against both Merida’s appearance and “spirit”.

Anyway – that can be watched below!

And here is the finished product. I’m quite pleased with everything, next time i’ll use more blush but that’s about it! 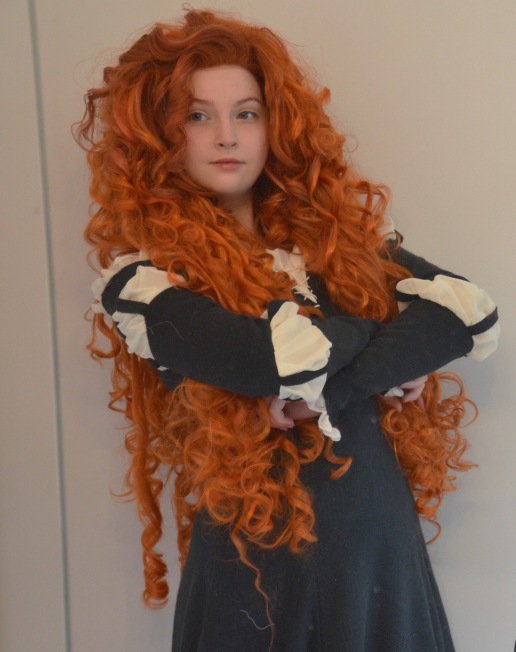 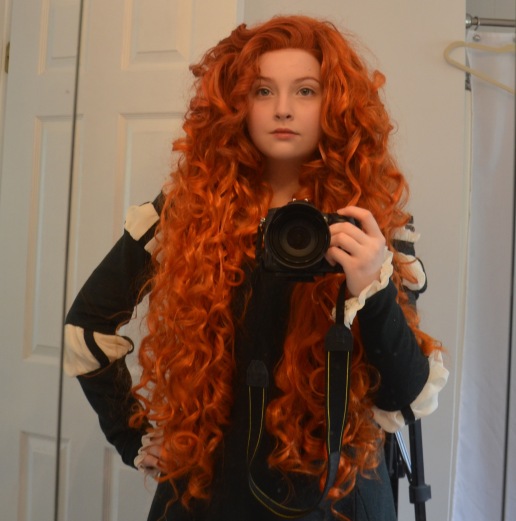 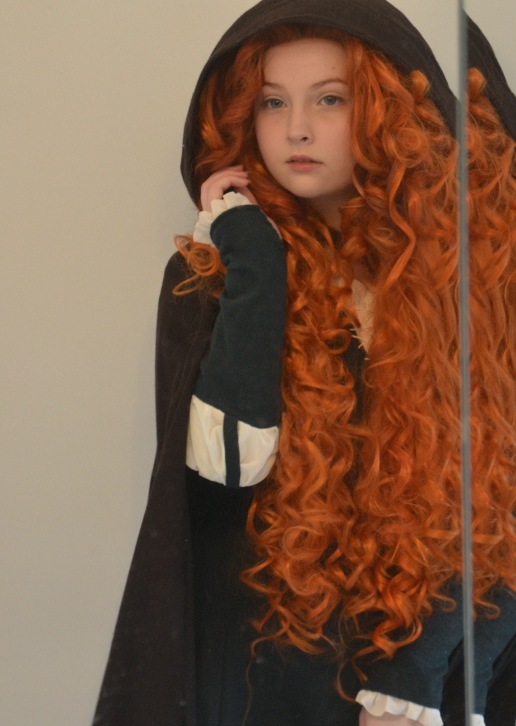 And of course, a photo of the finished dress. Hopefully I can get pictures of these together later on this week – I would love to have a shoot in the woods before I take this to animenorth and the wig get’s all messed up. 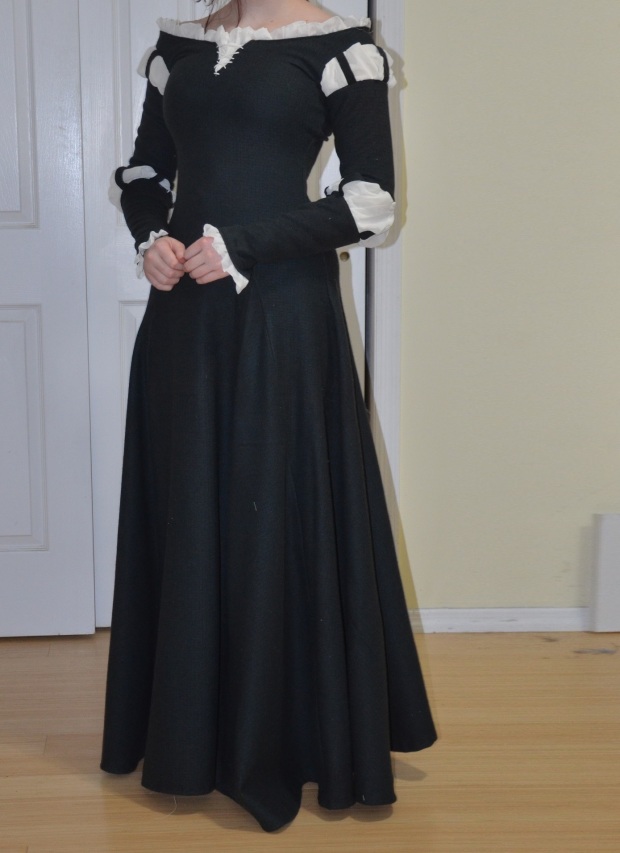 I do believe that is everything!