Here we are with part three, all about the ruffly skirt! Ruffly skirts are the best skirts, I feel passionately about this and had quite a bit of fun creating this one!

I put up a “tutorial” for this on tumblr, with the bare minimum of required information on how to make it. It ended up being surprisingly popular, gathering 5000someodd notes which is a new record for me! If  you would like to see the short, tutorial version of this project click here.

To be honest I didn’t start out with a big plan in mind. For the petticoat I decided to go with my usual method – the one that involves making tons of ruffles and then hoping for the best. In total this petticoat has more (yes, more) ruffles then my RMT bustle has! I was slightly shocked by this, especially since this was so easy/fast to make compared to the bustle.

(In total there are over 25yds of ruffles on the underskirt, which required over 150yds of hemming.)

I made the ruffles with my usual string method, which you can find more info on here! I really do not want to explain it again, since it’s very boring stuff. But, in case you had forgotten, it involves a lot of hemming. I began the hemming process on my Singer Heavy Duty 4423, my main machine that I got seven months ago (give or take a bit). Sadly half way through the project it began making a very load squeaking noise, overheating, and having tension troubles.

The machine was replaced a week later with a Singer Industrial 161D-30, which is a HUGE upgrade. In addition to being larger and sturdier it also sews ten times faster then the baby machine I was using before. Which makes hemming massive amounts of ruffles a much faster, simpler task. Can’t say i’ll miss my three hour hemming marathons.

Anyway, once the ruffles were made I sewed them onto 4″ rectangles of netting.

Then the rectangles of netting were gathered and sewn onto a 1/2 circle skirt, which looks like so!  Looking back I wish it was a 3/4 skirt..but eh, that would be a lot more work. This skirt is made out of heavy canvas, if you plan on creating this you’ll want to use a sturdy material that does not stretch.

If you are unaware of how circle skirts are created an awesome tutorial exists here.

Though I was quite pleased with this, the shape was all wrong – so I created more ruffles and sewed them onto very long panels of netting which were pinned to the waist, giving a cupcake shape.

I was very unimpressed by the poof factor this created. So I made even MORE ruffles and did a second layer of gathered netting, this time I used 8″ tulle which was sewn four inches above my first layer

Finally I was pleased with it, but the ruffles were kind of all over the place. 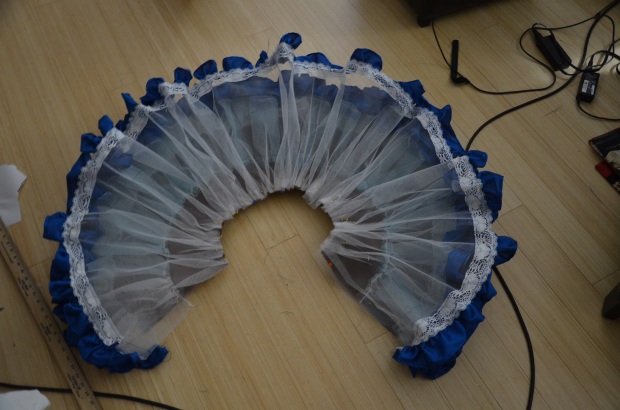 See how messy they are? This bothered me. 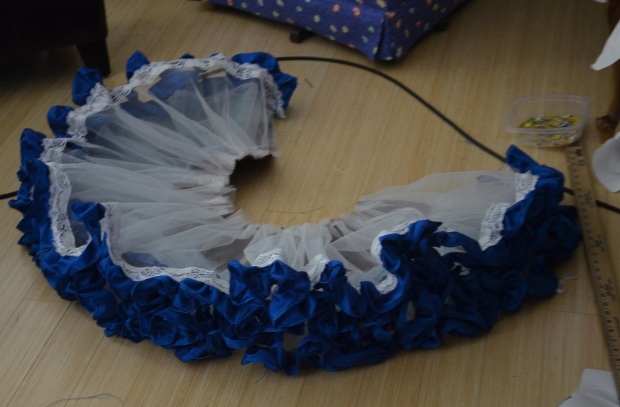 I used a very large needle and loosely sewed through all the layers, just enough to keep all the layers pressed against each other. Sadly this made the skirt a little less poofy, but it looks much better. 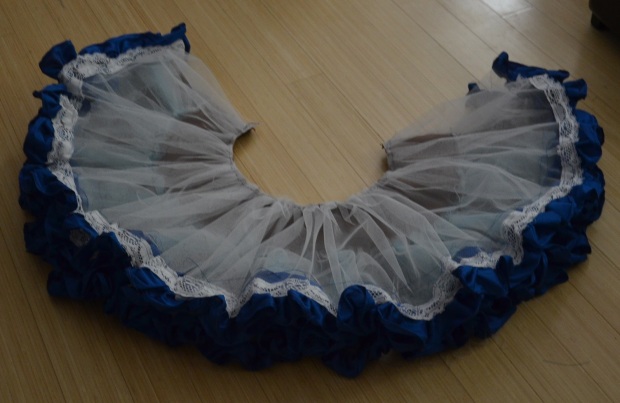 Skipping over a few steps, since I didn’t take pictures of this part, here is the overskirt! It’s made up of 1 1/2 circle skirts which I gathered down by hand and hand sewed into place. Then a ruffle was hand made, and sewn onto the edge. I think it’s all pretty self explanatory. 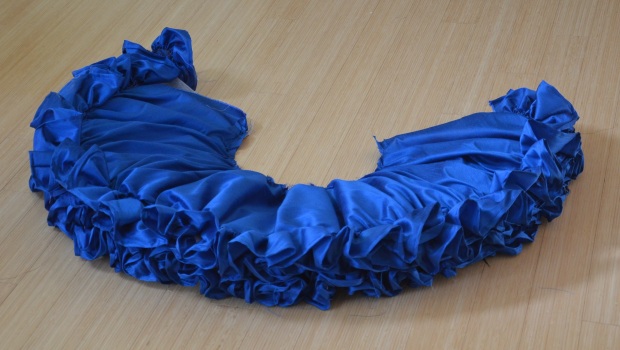 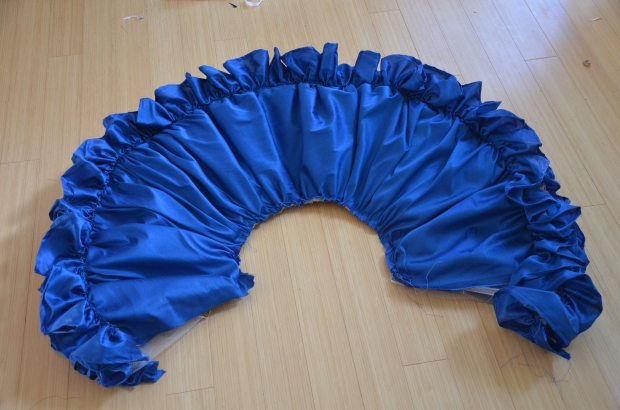 Then it came time to add stripes to my wonderfully poofy skirt. These looked like so and eventually had the sides turned over and stitched down. 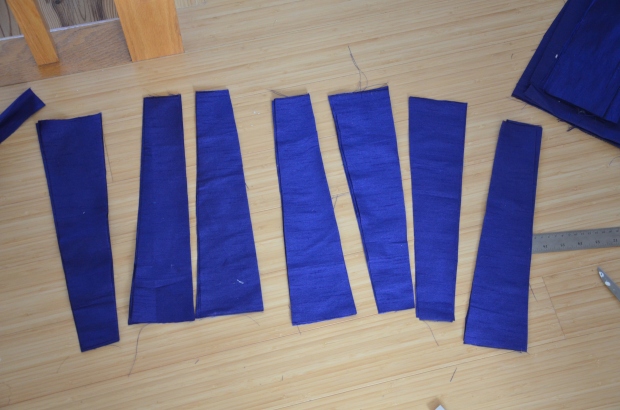 Then they were placed onto the skirt. 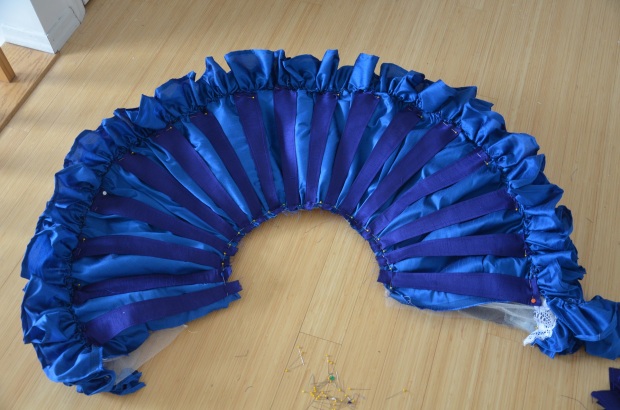 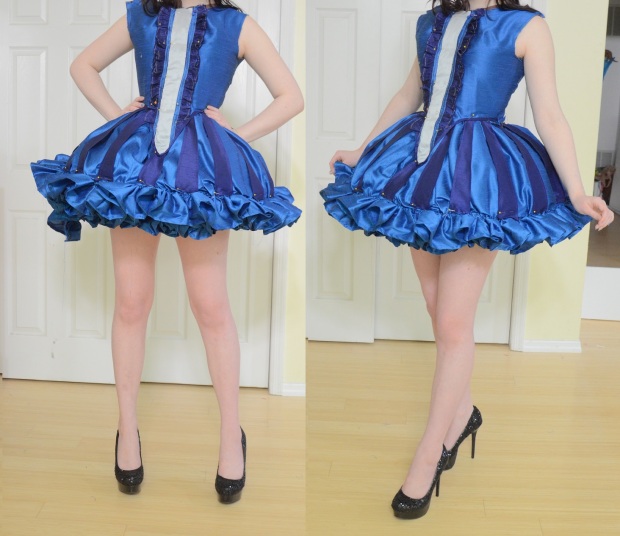 But it was still missing something! And since it was decked out in ruffles that can only mean one thing – it needs sparkles.

I quickly remedied the lack of shine by added little white plastic diamonds on each stripe. 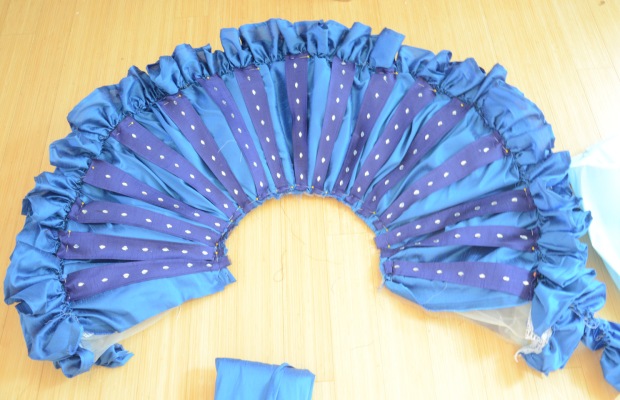 Which STILL wasn’t enough, so I created a double sided ruffle and glued the diamonds down the center.

My skirt also got a waistband. 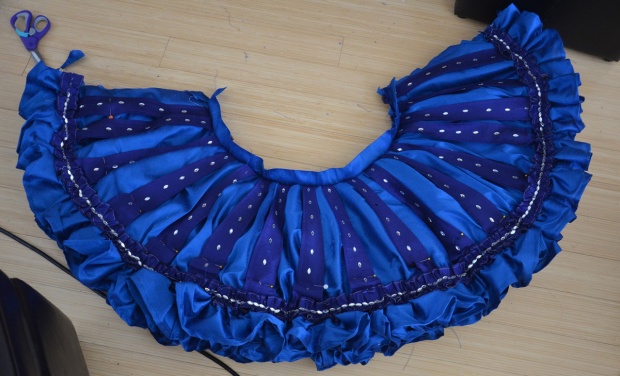 At this point something was still off – it wasn’t poofy enough. So I decided to sew in hoopskirt boning which instantly made it puffier and rufflier! 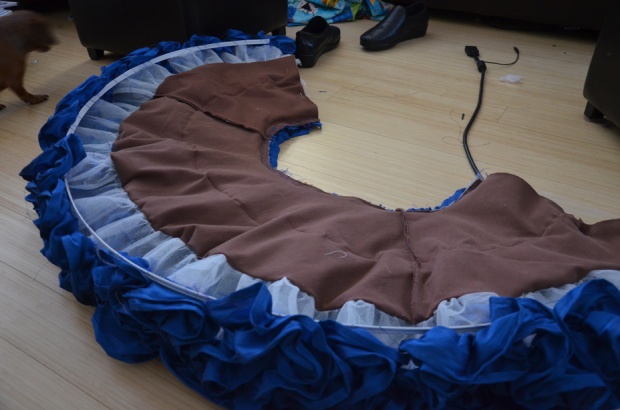 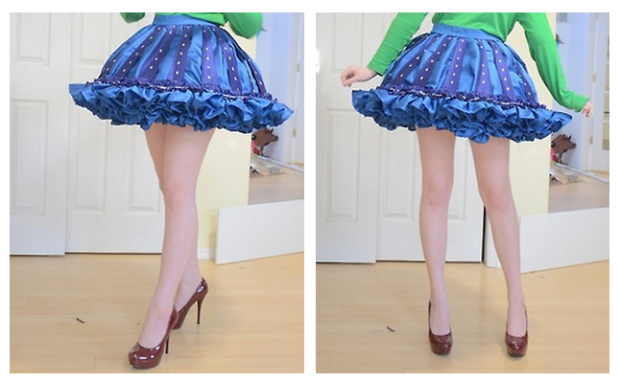 I also added a 6″ zipper down the back and two snaps for secure closure. I don’t have photos of that bit, but I DO have pictures of the bodice and skirt together. 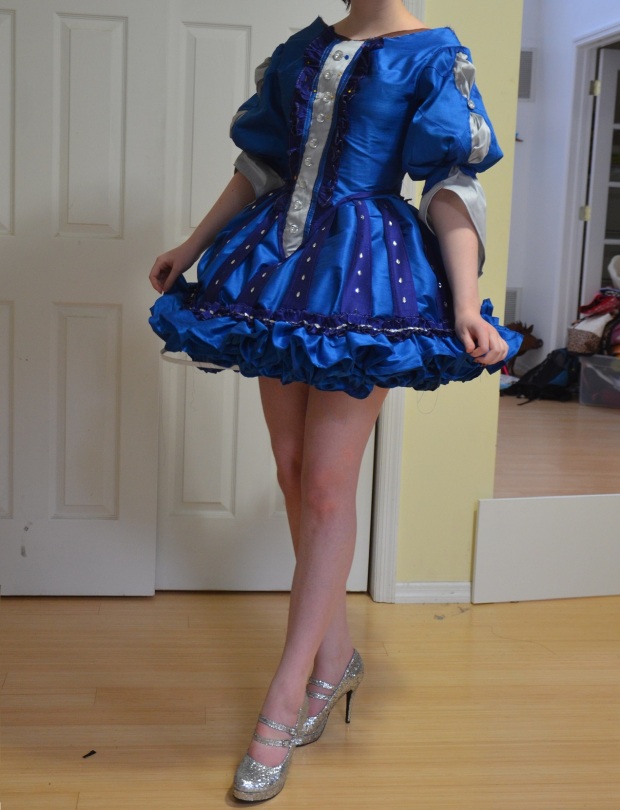 And that’s about everything for now! The end is in sight!

9 thoughts on “The making of a Glass Angel Costume, Part Three”