Like the vast majority of my projects, I’m not entirely pleased with the name I’ve chosen for this, but I think it is more amusing then calling it “Red and gold dress #2” so I shall stick with it. The name was inspired by the fact that this costume is red, gold, glittery, and decorated with things purchased from the christmas section of a craft store. Wearing it makes me feel sort of like a princess, but mostly like I belong on top of a tree.

I originally came up with this idea when I was researching 17th centuy gowns and the baroque period – as I have plans to make a very simple taffeta gown of that style in the near future.

Unsurprisingly I got distracted, this time by a stunning painting of Anne of Austria which can be seen here.

I really loved the idea of having a dramatic cape and overdress on top of a heavily printed gown. Then I remembered some materials I purchased for my birthday earlier this year that would work really well for such a thing. I had a little less then six yards of a lovely brocade, along with several yards of matching gold satin and organza. All together I was sure I had enough to make something wonderful!

When I went into NYC a few weeks back I purchased eight yards of velvet to turn into a cape, as well as enough tulle netting for an underskirt. And so it began…

My first sketch looked like this, very similar in style to the painting that inspired it. I ended up dropping and changing a lot of these in my  more finalized sketch later on. 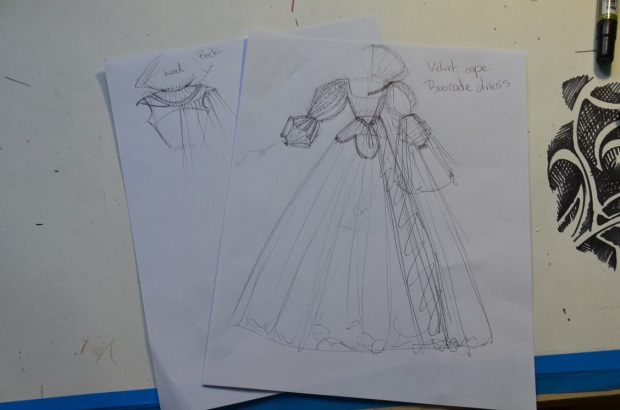 I began with the bodice, I altered the pattern I made for my pirate bustier to better suit this project. Then I cut it from a heavyweight twill which became my lining, and again from brocade. I sewed the boning onto my lining, then sewed it right sides together so each edge was finished! 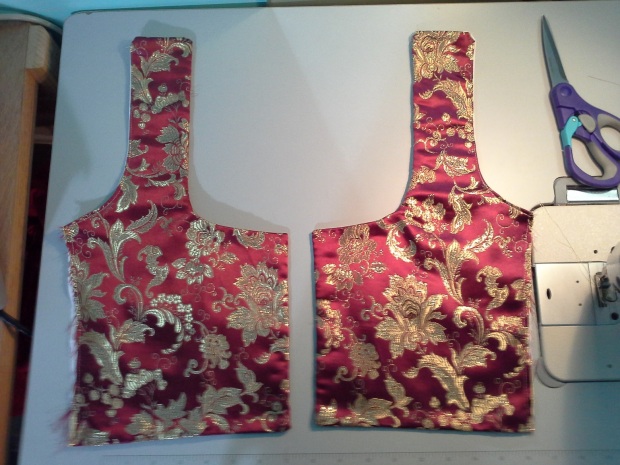 I went through and tacked both layers together with a cross stitch so no topstitching would be visible on the fabric. Then I moved onto the sleeves, which were going to be the most elaborate and outrageous part of the costume.

I wanted a very specific shape, one that requires a very poofy base, so I decided to start by cutting a normal sleeve pattern which would be quite snug. This is the base that I would sew everything to.

I made little rolls out of quilt batting rectangles. 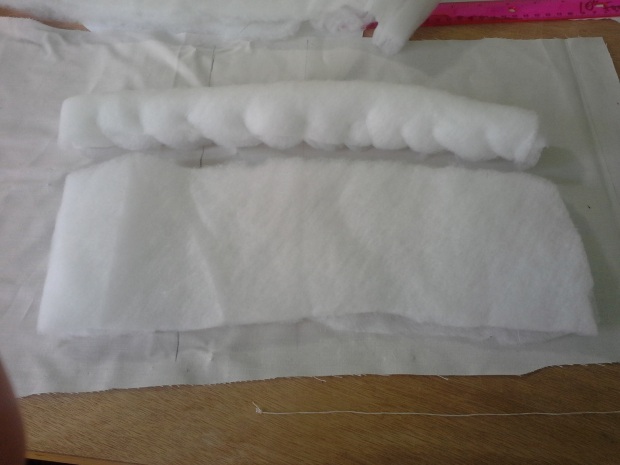 I sewed two rolls to each sleeve, marking where each puff would be.

Then I cut much larger rectangles of quilt batting and draped them evenly on top of the smaller rolls.

This is much more time consuming then any other sleeve base method I’ve used, since these have to be hand sewed down very carefully and evenly to get identical shapes on both sleeves. But I do like how this ended up looking much more, it is also far sturdier and more comfortable then just stuffing sleeves like I did in past.

Definitely a method I plan to use again in future projects!

I took a large piece of satin and gathered it down the middle. Then it was pinned onto the sleeve base.

I sewed this down and repeated it at the top of the sleeve, then again with my other sleeve. I cut off many extra inches of material that hung over the edges. 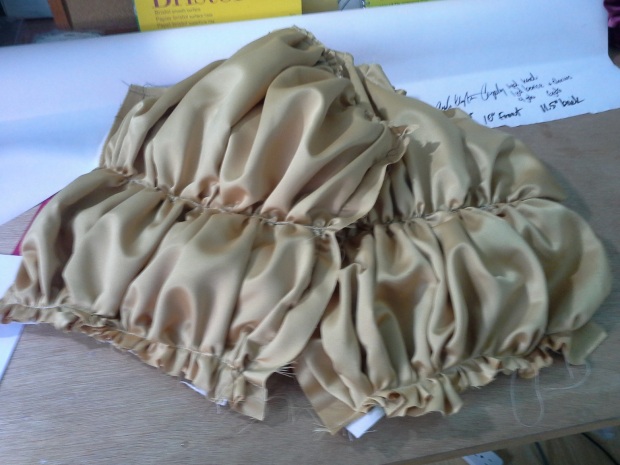 I repeated this with gold organza, except this time I used an even larger piece of material and a pattern I drafted to make sure they were actually even.

The picture shows me attaching half of the second piece of organza. 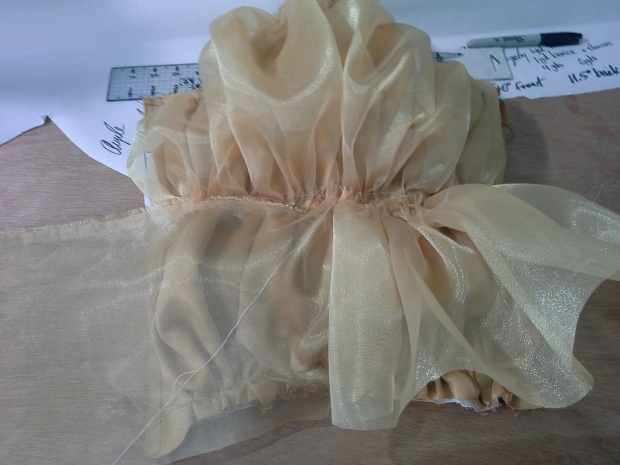 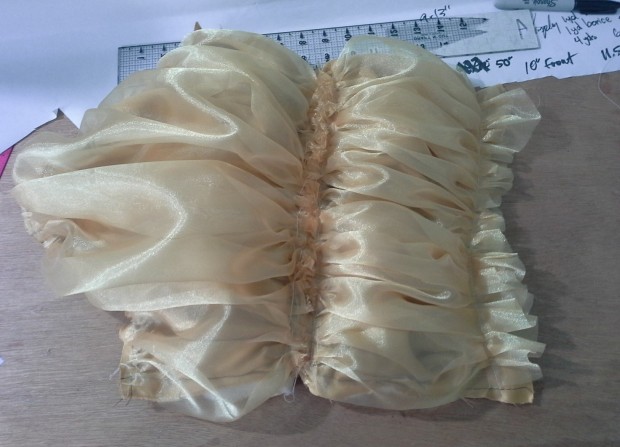 Finished with that step, but the sleeves were far from done!

I did take a momentary break to see if they had the shape I wanted and they really, really did. They looked exactly the way I wanted and I couldn’t have been happier! I was stupidly giddy over the shape of these things.

I would also like to say that this is the actual color of both materials. I’ve been switching between photographing things with my phone and my nikon, my phone tends to make everything much less vibrant. The brocade also has a tendency of changing between red, pink, brown, and maroon depending on lighting. 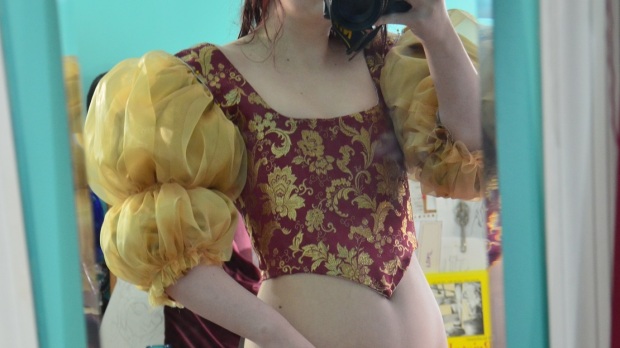 Next I went ahead and made the strips for a sleeve overlay, which was a somewhat tedious and boring process that I didn’t photograph at all. But once I was done I ended up with two of these 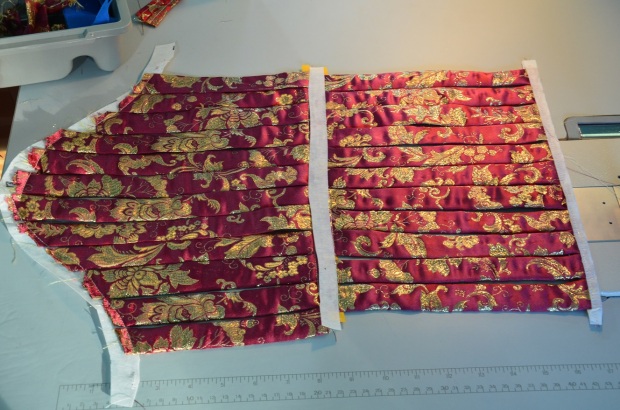 Which were sewed to the sleeves, and looked like this!

You could see the icky bands of interfacing between the puffs and at the bottom of the sleeves which I needed to fix.  I cut a few strips of satin and a very long piece of organza which was turned into a ruffle, and when that was sewn on I was left with this! 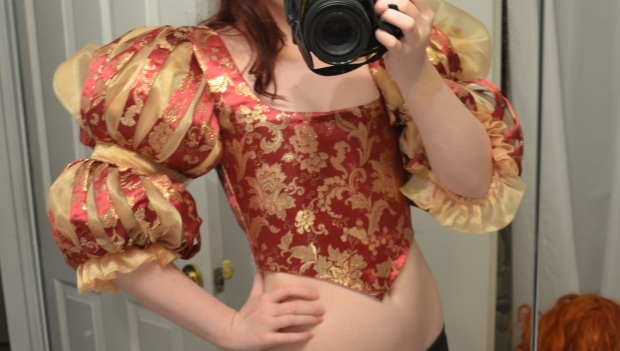 In the picture above the sleeves are sewn onto the bodice, but the side seams are not yet done, which is why they look a little loose. Once they get stitched up they should fit nice and tight!

I should also mention that each edge of the sleeves were encased in bias tape so they wouldn’t fray.

The next post will talk about the skirt. Or the cape. Whichever I finish first.

4 thoughts on “The Christmas Costume – A Glittery Gown – Part 1”