If you’ve been following me for a while, then you probably know I really like pretty dresses. And if there is one thing I like more then pretty dresses, it’s challenging pretty dresses. So it’s probably no big surprise that I fell in love with this design and had to cosplay it.

This post will be about the skirt, the next will talk about the bodice, then the cape.  The shoes and wig stuffed somewhere in between.

I started by draping the pattern on my dress form. I purchased silk for the skirt, so I knew it would be very flowy, but the material I used for my mock up was not, which made it tricky to visualize. The process did go very smoothly, though. And after a few minutes I had something that looked like this: 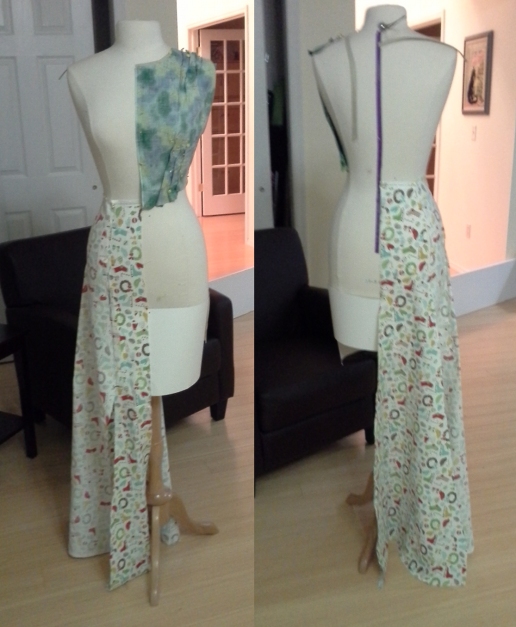 I turned this into a mock up and I was actually surprising pleased with the result! The volume was exactly what I wanted, I just had to add an extra half inch on each side for ease, and lengthen the hem.

When it came to fabric choices I had originally planned on purchasing some sort of printed spandex, but after looking in several stores none of them were “quite right” and I eventually gave up and figured I could purchase a silk or linen of some sort and weave metallic threads into it.

Well, not long after I had given up, I found the perfect material stuck in a bin of silk organza. I really don’t have the slightest idea what type of material this is, but I know it’s silk, it doesn’t stretch, it feels like a mix between chiffon and organza, and I bought the very last of it.

It’s also quite sheer, so I bought three yards of peachskin to line it with. I picked a peachskin in a completely different color, instead of teal I bought a blue that matches the material I bought for the cape. One of my biggest peeves in Elsa’s design are the color differences, which i’m afraid might look unintentional and mismatched in real life. Hopefully this will help tie the dress and the cape together.

I made my alterations to the pattern directly onto the peachskin, and it looked like this!

As you can see it’s a seven piece pattern, cut once  from peachskin and again from the silk.

Although I bought four yards of the silk I really wish they had another half yard. I didn’t quite account for the fact that silks are only forty inches wide.

Once I finished cutting everything I sewed together both layers separately, leaving the side seams open. Instead of attaching the lining and top fabric together at the back, I wanted to do it at the sides and finish them with french seams.

Once I was confident everything was right, I lined up the slit of my top material and my lining. I turned over both edges so they faced each other, and pressed them quite thoroughly before pinning them together. Then I stitched them together by hand, since the material is so delicate.

After that I did up the side seams, and began work on the hem.

For the hem I did the same method that I used for the slit, i’m not sure if there is actually a name for this?

Here you can see the top fabric turned under and pinned down, I repeated the process on the inside with the lining material so there were no raw edges.

And after that, all it needed was a way of closing and a waistband! I actually woke up and it was snowing, which was the perfect inspiration to finish this.

I simply made a waistband with finished edges, then sewed it onto the top of the skirt. I finished the raw edge with bias tape…and i’m really super proud! I think this is the first garment I’ve really attempted to finish nicely, and I hope it shows.

I had left six inches open in the back of the skirt, finished the way the hem and slit were, so I could easily add the grommets. I debated between grommets and a zipper, a zipper would have been more subtle…but I feel like if Elsa actually existed, her bodice would lace up. And if her bodice laces up, it looks nicer to have the skirt lace up too. So that was my logic there.

I added a bit of lacing and it was done!

It took around ten hours, and was by far the easiest piece of this costume. Let’s just hope the rest goes as well as this did.