Time sort of slipped away from me and I didn’t quite realize how long it had been since my last post, oops!

I’ve been busy with projects throughout the past few weeks. My primary focus has been Elsa but I’ve also been working on a bunch of mock ups and original designs, some of which are historical based and others that are somewhat casual. I don’t think a day has gone by that I haven’t worked on something for at least an hour – it’s been great.

Most of my precious hours of productivity have been eaten by Elsa. This costume has been such a huge undertaking, even more challenging and time consuming then I had originally expected! But I’ve really enjoyed the opportunity to make something really detailed. It’s always been a dream of mine.

So that’s what I’m going to talk about today. I originally planned on only having three posts about the making of Elsa, but I’ve given up on that and will be happy if I end up with five. I have tons of photos and information to share about this, and I don’t want to scrunch it down.

You can read my previous posts about this project, here and here.

This particular post is on the drafting process for the cape/train. I will talk all about embellishing it in a later post (I actually hope to make a video on the process but I haven’t gotten to it yet)

For Elsa’s shirt and cape (or as some people have been calling it, her train) I chose to use stretch mesh. It’s a material that looks like tulle, but feels much softer and stretches in all directions. Sadly it doesn’t drape as nicely as chiffon or organza, but since it’s stretchy it will work better for the shirt.

I won’t even have to worry about adding a zipper, or hemming anything since it doesn’t fray!

I purchased eleven yards of stretch mesh, one yard for the bodice, and ten yards for the cape.

I cut the ten yards into three chunks, two that were three yards long and one that was four yards long. Then I pinned them very roughly onto my dress form to make sure I had enough length. 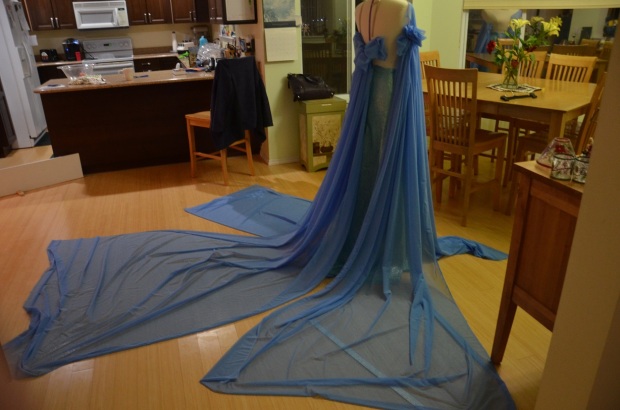 It doesn’t look like much, but I was actually really happy with it haha. I had plenty of length, and I could tell I had enough fabric for the volume I wanted as well.

I knew I wanted my cape to be six panels, with a seam down the back. So my next task was cutting each length of fabric in half, so they could create two panels. Instead of cutting them in half the way you would expect, I cut them diagonally so I could save the length. 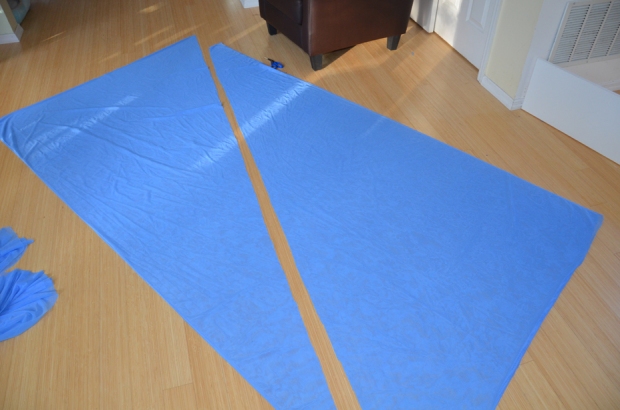 Then I pinned the longest panels onto my dress form. I made sure to adjust my dress form so it stands at my height, plus a few inches to account for the heels that go with this costume. 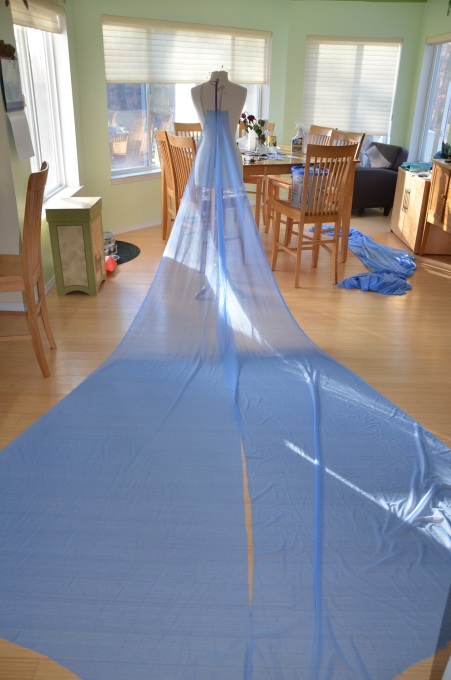 I repeated this with my other pieces of  fabric, and then I had something that looked a little like this: 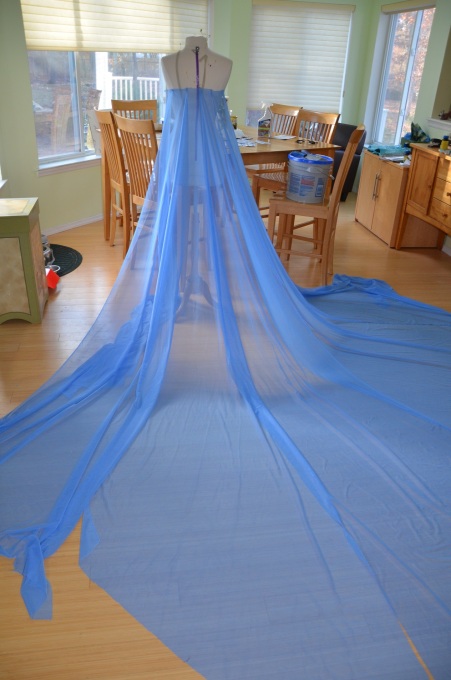 Now I was ready to start shaping it! I pinned all the panels together and trimmed one side down until I liked the shape. Then I took it off my dress form and used the side I had trimmed as a pattern for the other half. In the end, it looked like this. 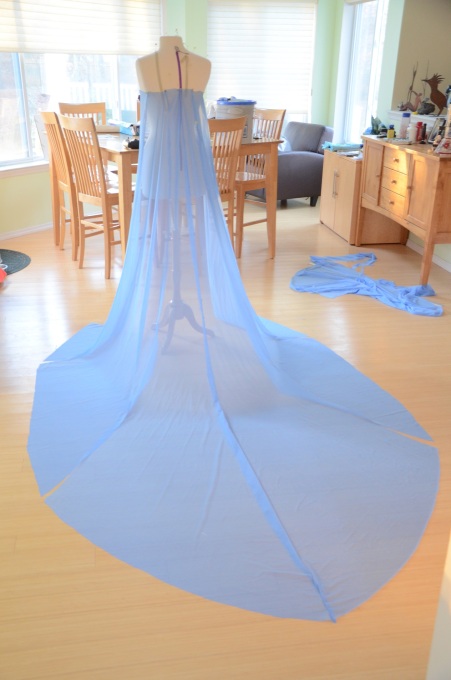 (sorry for the messy background) 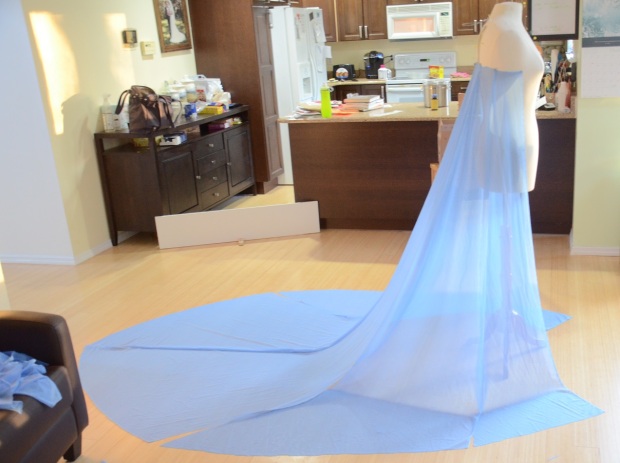 I laid the cape flat on a giant sheet of paper, then traced around it and marked out all the seams. 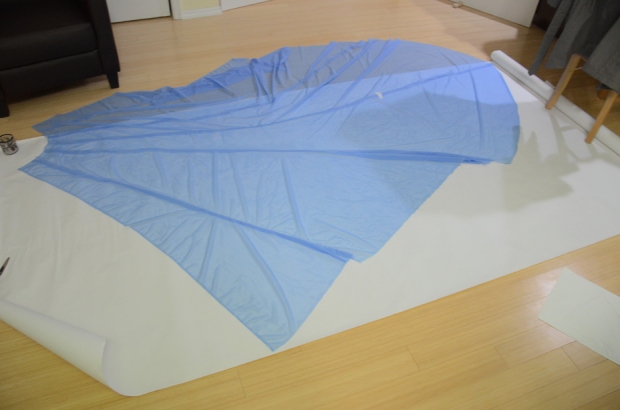 I used a ruler and french curves to draw out the giant snowflake. 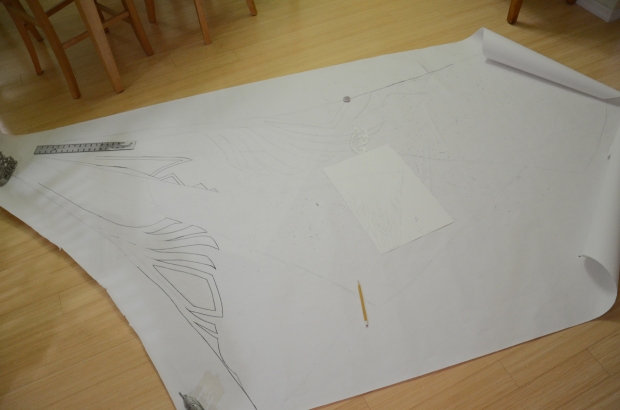 Once I was finished, I taped wax paper over the entire design, and pinned the cape over top of it. Since the fabric is sheer, the design is easy to see through the cape. This way I have a guide for embellishments. 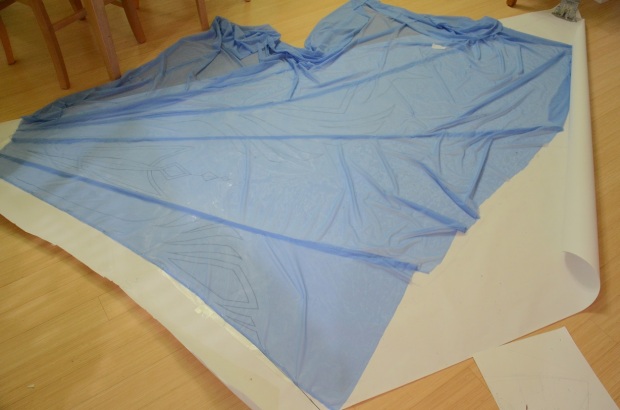 Now moving on to getting the smaller snowflakes onto the cape!

I started by going into photoshop and figuring out (roughly) where the snowflakes should go, and what size they should be. 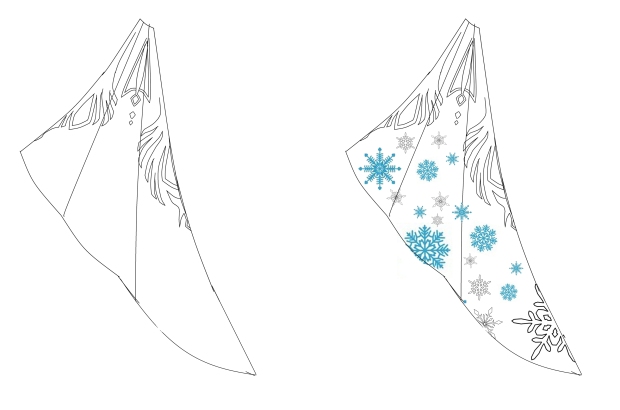 I decided to conquer these panel by panel so I wouldn’t get to overwhelmed – right now I’ve just started, so I only have one panel complete. Luckily that’s enough to make an example out of.

I laid my cape piece over paper and traced out the area I needed to add snowflakes to. Then I used my guide to draw out circles in the rough areas where snowflakes needed to go. 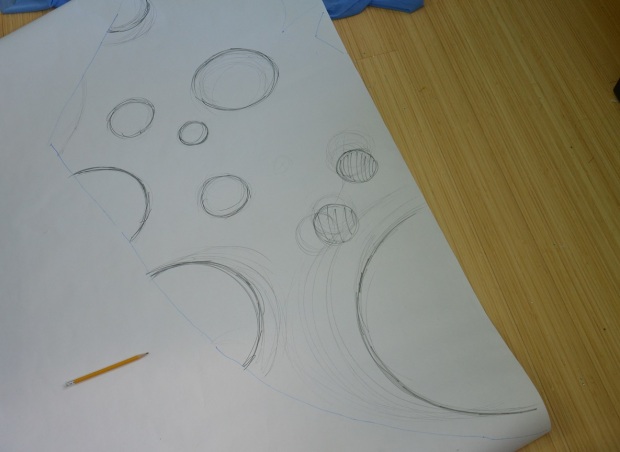 I measured the size of each circle and marked them clearly. Now I knew exactly what size of snowflake patterns I needed to print. 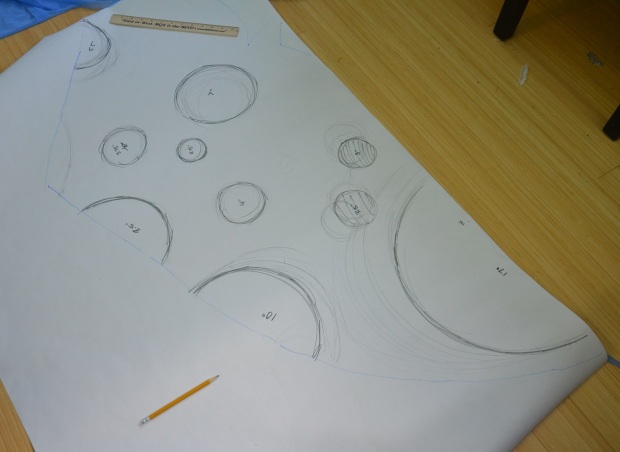 When it came to printing I went into photoshop and did this: 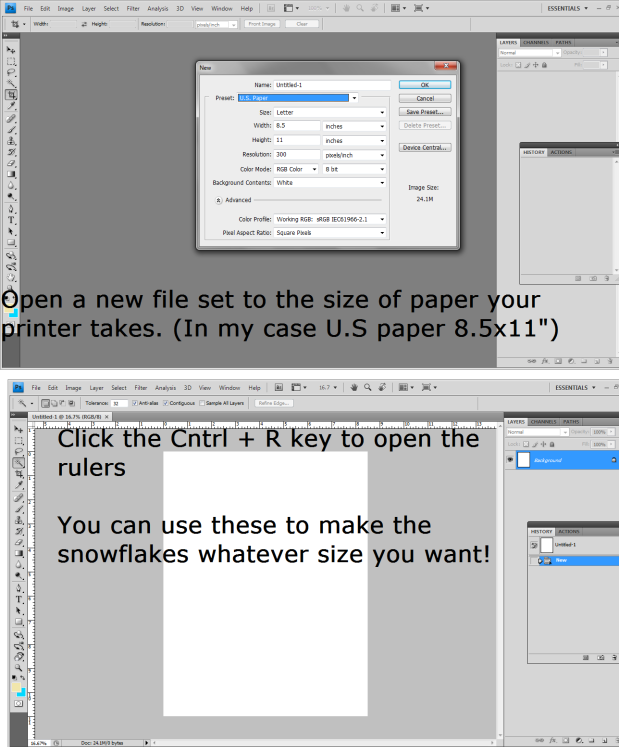 I ended up needed to print off four pieces of paper for this particular panel. 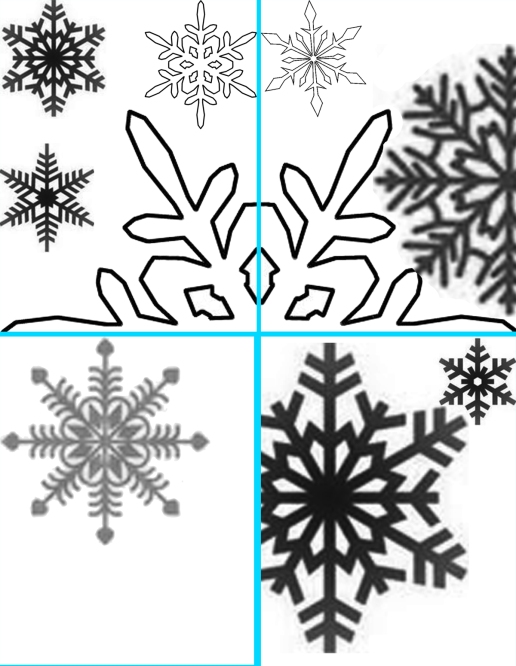 Then I cut them out and taped them into the right places. 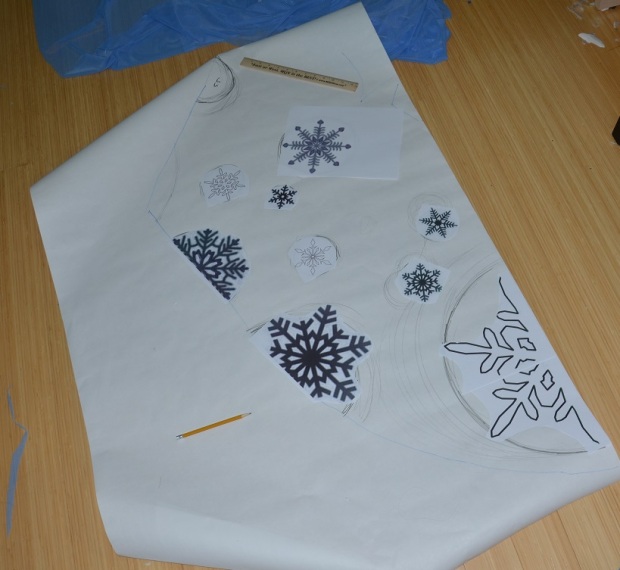 I ran out of wax paper, so I improvised and used a layer of plastic wrap taped over the designs. 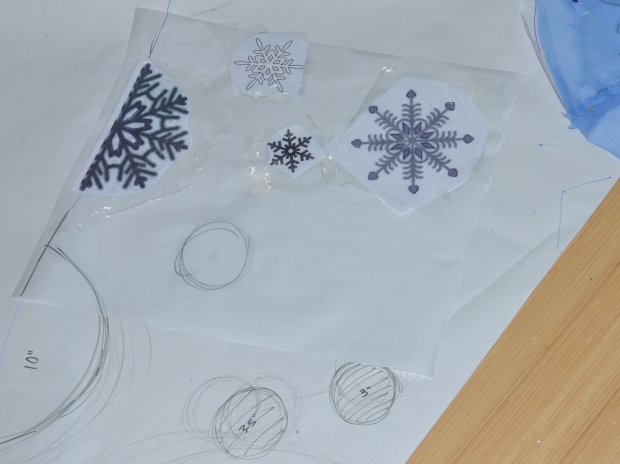 Then I pinned my cape over top of that and was ready to embellish! During the embellishing process it looks a bit like this 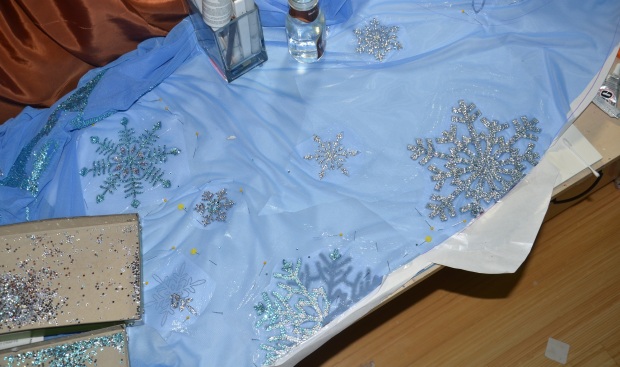 But I will save all the information about how to do THAT for next week.

I hope you enjoyed!

39 thoughts on “The Making of Elsa – Frozen – Part Three”