This has been the a very difficult and unusual post to write. Usually I pick costumes that are challenging, but relatively quick once I figure out how to make them. This was the opposite – It was a easy, but very, very time consuming. It’s also not a very interesting process, so I’ve padded the post with a lot of photos.

If this if your first time visiting my blog I would suggest checking out my previous posts about this project, they can be read here, here, and here!

Immediately after seeing the movie I knew what I wanted to use as embellishments. From prior experience with rhinestones, I knew that they shine in a way that almost looks like freshly fallen snow, producing a much prettier and sparklier look then anything else.

They can be used closely together to create designs, farther apart to create a gradient, or applied individually. This meant that I could use them to create the sparkles on the cape, sleeves and bodice, and since they would all share the same embellishments, it would made the entire outfit look more cohesive.

I have decided that I won’t bore you all too much with explaining the types of rhinestones, glues and applicators that are available.If I did, this post would be around five thousand words long. But if that sort of thing does interest you, you are in luck! I have created a separate post on my tumblr that can be read HERE. It answers a lot of the questions I’ve gotten, and has information and tips on everything related to rhinestones.

Moving onto talking about the costume! I originally purchased seventy thousand rhinestones, which didn’t end up being enough, so I made another order several weeks later. In total I used a little over a hundred thousand rhinestones on the entire costume, ninety thousand were 3mm stones, and ten thousand were 2mm stones. Seventy percent of them were clear (silver/white) stones, and the rest were a light aqua color.

This picture shows around half the stones I ended up using. 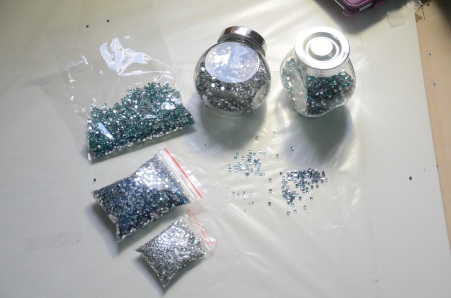 I also bought six tubes of E6000 glue from amazon, a set of syringes (glue applicators), cotton swabs (rhinestone applicators), and a bit of fabric glue. Once I had all my supplies I was ready to get started!

In my last post I talked about drafting the patterns for the designs. Once I finished drafting the designs, I did something very important – I taped wax paper over top of them. The glue I used for the majority of this costume is E6000, and the chemicals in it make both sharpie and printer inks run, which can leave permanent stains on the fabric. Like this…

If that doesn’t happen, you will still be screwed since there is no good way to get paper off of dried industrial strength glue. The wax paper creates a barrier between the paper and fabric which fixes both of these problems. When I ran out of wax paper, I used plastic wrap and found it worked well, but was tricky to perfectly smooth.

This is what my set up looked like when I was working on the large designs. The whole thing laid out flat as I could get it with the space I had available, with the edges weighted down by mugs and jars.

Thanks to a wonderful christmas gift, I had the ability to watch netflix while doing this.

(though I ended up running out of shows I was interested in, oops)

As I said earlier, the process is very easy, it’s just slow. You have to spread the glue over a small space, usually a square that’s no more then two inches by two inches (any larger and the glue will dry before you can get to it) or a line that is less then ten inches long.

Then use a wet Q-tip to pick up rhinestones and deposit them where they need to go.

I estimate that this back bit of snowflake ended up taking forty hours of work.

And though this seems pretty minuscule, just the sections pictured below is around 10~ hours of work. 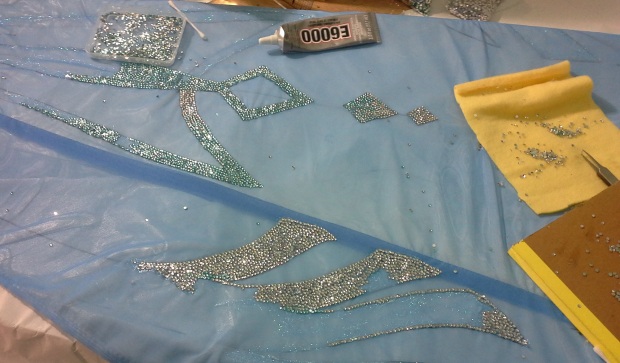 Eventually, I had enough of this finished that I could take it off of the paper.

It didn’t look like a whole lot at this point. But I was happy because this meant I could move on to adding the snowflakes. In my last post I talked about resizing them to fit properly, and that process continued on and on until I had enough snowflakes for every panel.

This is the front panel – this photo shows how easy it was to see the pattern through the fabric.

And the (tentative) layout for the side panels.

In total I embellished fifty snowflakes, and here they all are (well, half of them, since the cape is symmetrical)

The process of embellishing snowflakes was very similar to the main design, but instead of spreading the glue with a brush I used syringes, which allow for very precise dots and lines.

Not long after I started I ran into the issue of fabric not staying in place properly. It tended to wrinkle or move while I was trying to apply stones, and it became very frustrating. So I taped two pieces of foam board together and covered it in wax paper. Since it was foam, I could pin through it, and pin my fabric in place so it stayed taught.

And then I was (almost) finished with all the snowflakes!

So I got back to focusing on the main design. We happened to get a snow day, which meant my view got way prettier and more inspiring then usual. 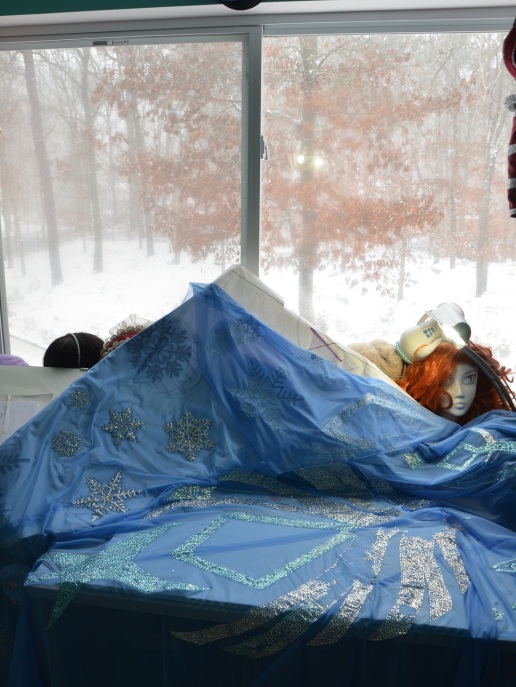 It also distracted me. Some much so that I ended up dragging my dress form into the snow for some fancy WIP photos. 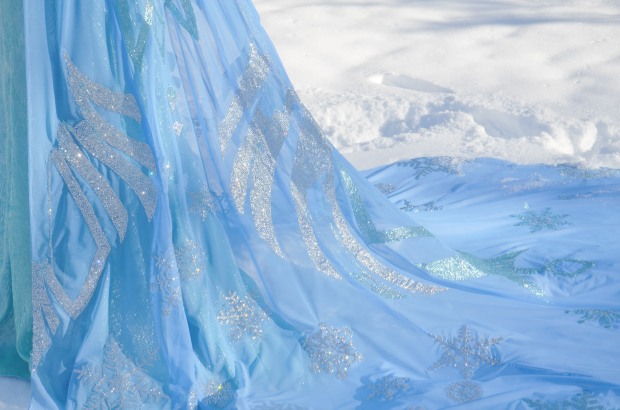 Though it looks relatively close to being done, I had to put twenty more hours into it before it was actually finished. At this point I was so tired of the project that I stopped taking photos. (oops)

And though I don’t have photos of it completely finished just yet, here it is at 99.9% done. In total I spend around 170 hours on the cape, 168 of which were spend embellishing.

It was super time consuming, but in the end I’m happy I did it this way. It’s always been a dream of mine to make something really sparkly and wonderful, and i’m happy to say that it’s come true! 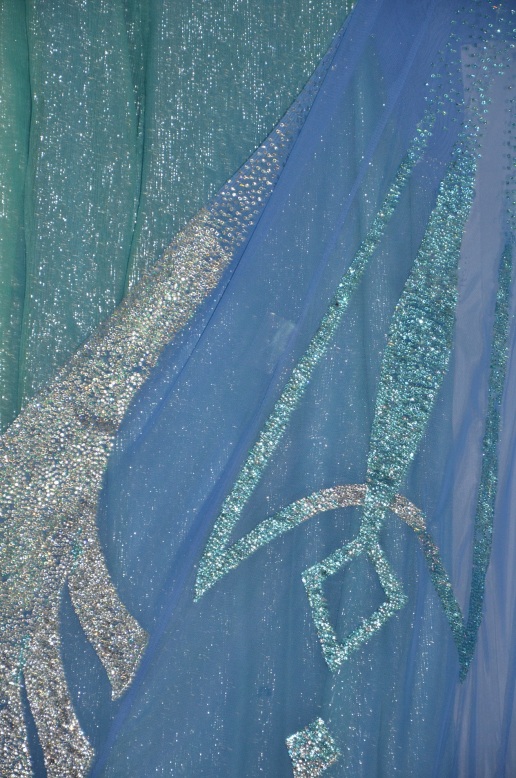 Upcoming posts: Making 17th century bodies, Making a Grey dress, and the final post in The making of Elsa!