This is a post is over eight months in the making, how crazy is that? I started on this project in August and eventually lost interest. When I pulled it out two months ago to resume progress I was horrified by the construction, messy topstitching, and mismatched seams. Some seams were an inch off from lining up – an inch! I guess my standards have changed a lot in the past months.

I wasn’t really sure what to do, I liked the design but I wasn’t sure I liked it enough to rip out all the seams and remake it. And I definitely didn’t want to finish it in it’s current condition….so I put it away and hoped I’d never see it again. But a few weeks ago it was calling to me, so I decided it was time for it to have a makeover.

This post will be a little odd because of that – a mix of old and new progress pictures, explanations of what was done wrong, how I should have done it better, and stuff like that.

This project was inspired by some Lucas Cranach paintings – after flipping through a gallery I wanted to make something “With a lot of sleeve puffs”. Then after seeing “The Three Musketeers” I had a very strong desire to make something with a fantastic hood like this.

I wanted to make it off of materials I had around, so I decided on off white chiffon (lined with satin), and six yards of blue stretch taffeta. 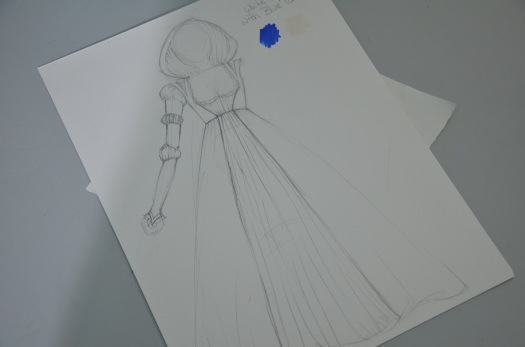 I’ll start with making the skirt, because that was the first thing I did.

These pieces are cut out so wobbly, it kills me, ahh! 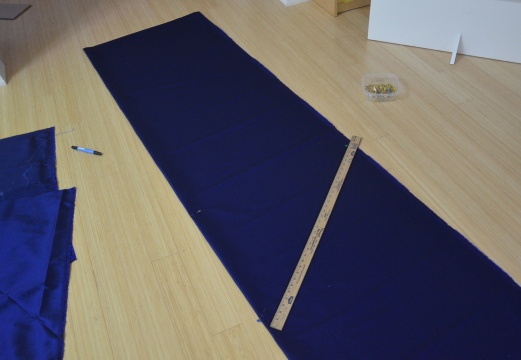 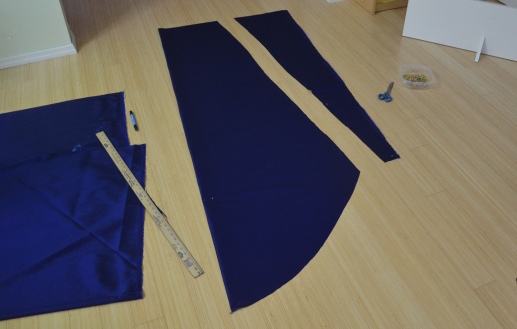 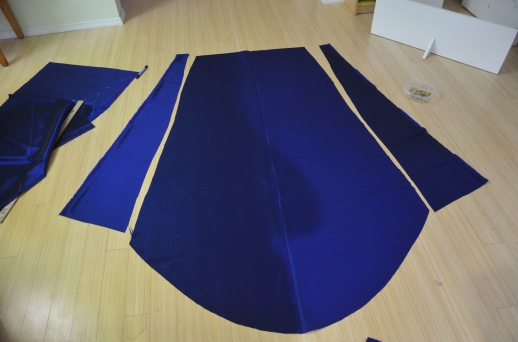 And once those are sewn together and gathered… 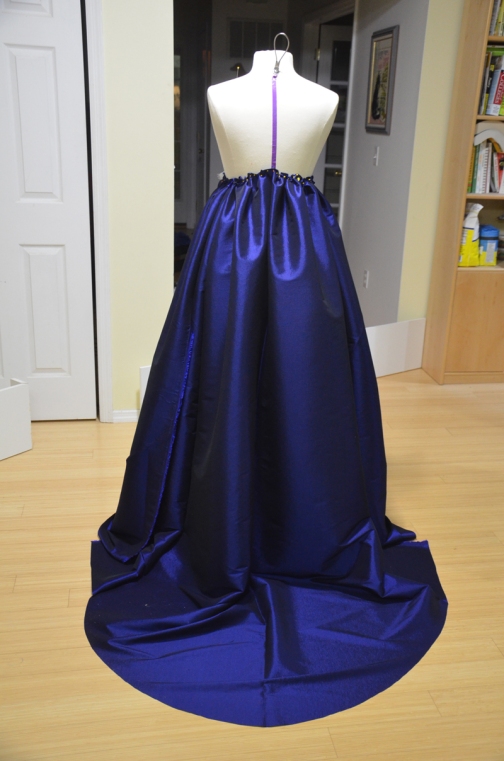 As lovely as that is, i’m placing it aside for now and moving on to the terrors of the bodice.

The bodice pattern is really, really weird since there is a puff embedded in the strap. It took me several mock ups and a lot of playing around to get the shape I wanted. Once I did I turned my mock up into a paper pattern which was used to cut out the stretch taffeta and blue cotton (for lining). 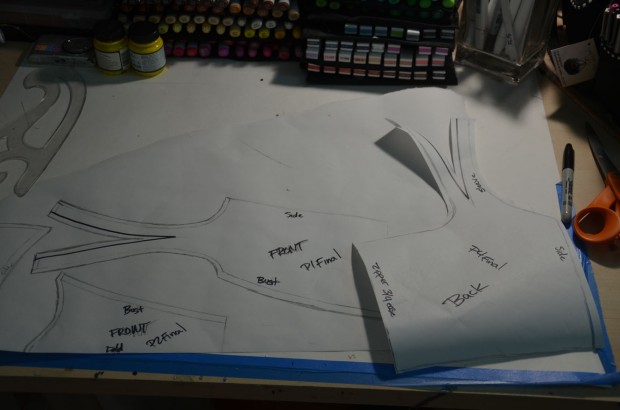 The front section was supposed to be gathered chiffon, I used white cotton as a base and gathered the chiffon over top, then I sealed the edges with brightly colored bias tape. 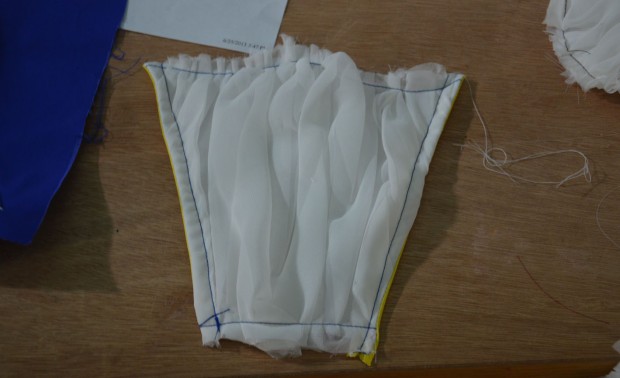 I sewed boning into the lining of the bodice, then pinned the lining and top layers together. 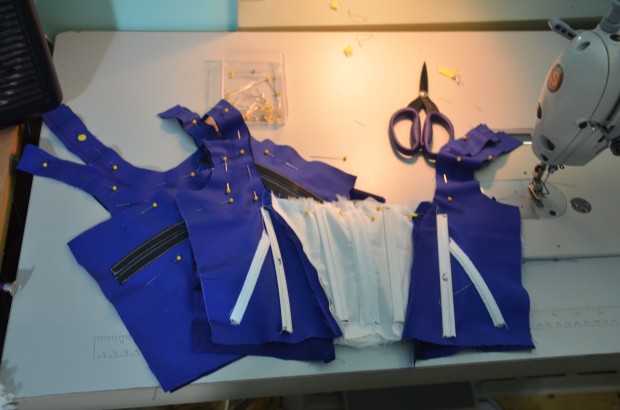 Once everything was turned right side out I top stitched very poorly around everything – this was right when I got my industrial machine and hadn’t quite figured out the proper settings for everything, because of this I was using a 1.7 mm stitch – now for top stitching I use a 3.5.

Because the stitches were so tight I had no hope of ripping this part of and redoing it.

I sewed the shoulder straps together and pinned the first of the puffs into place. 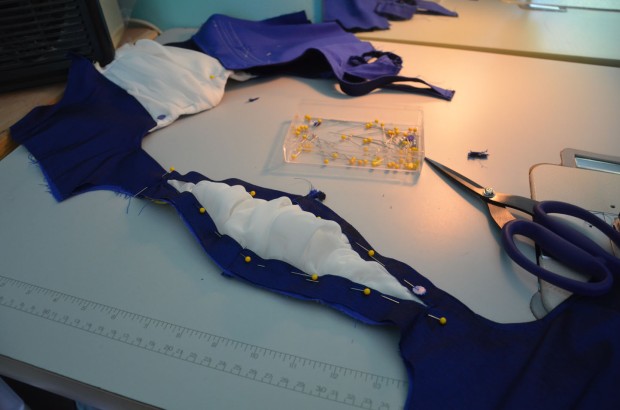 I pinned the side seams and tried it on – it was pretty vulgar so I added a ruffle for modesty. Which required even more awful top stitching.

Back to work on the sleeves! Lot’s mot puffs and bad top stitching. Yay. 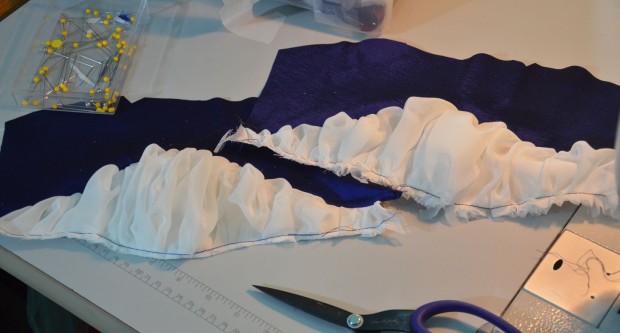 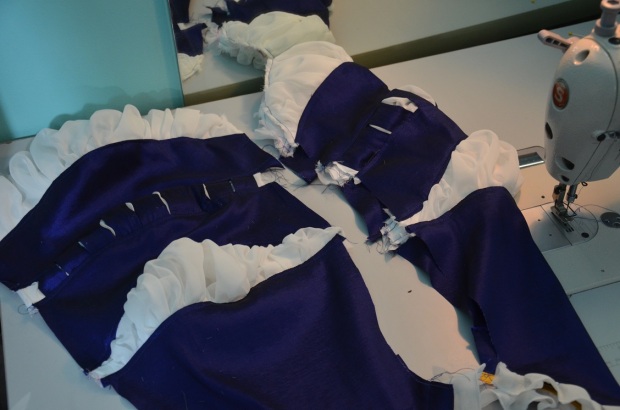 I also ripped out four unnecessary layers of topstitching at the wrists – i’m not sure what they were there for, but they weren’t doing any good. 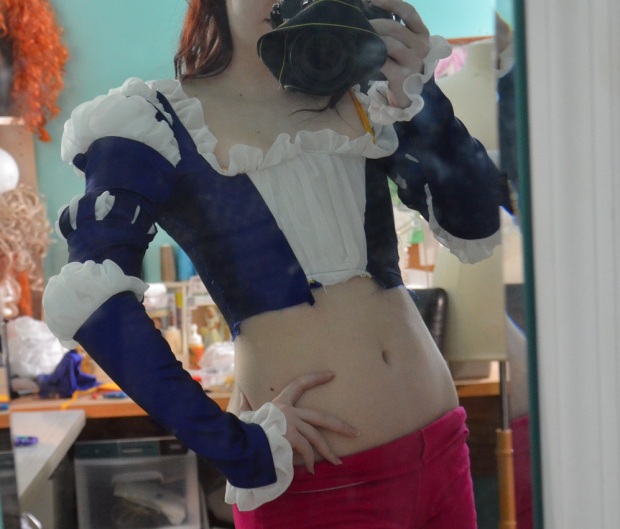 In addition to ripping off the sleeves, my bodice repairs included adding embroidered eyelets to the back (instead of a zipper) and hundreds of tiny 2mm decorative pearls. I sewed the pearls around the neckline and used them to create the look of lacing on the front of the bodice. 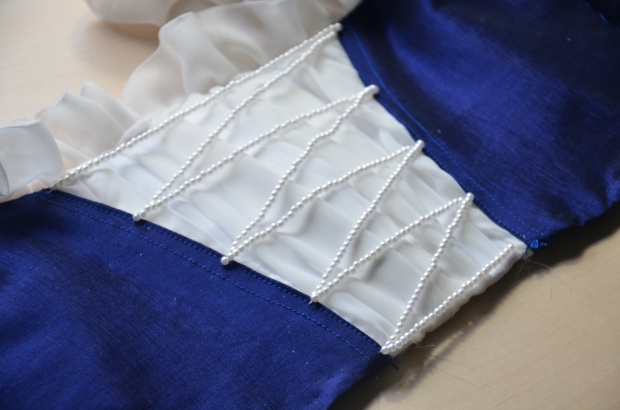 I also added elastic to the edges of the neckline so the ruffles would cling to my body and offer a little more modesty. 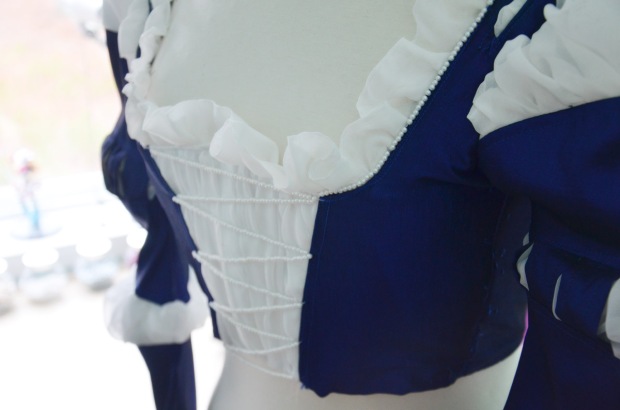 Now lets go back to the skirt! The first time I made the skirt I attempted to sew the chiffon panels and the taffeta e panels onto the bodice, then sew them together…which is really dumb and i’m not sure why I chose to do that, but that’s why I have this photo.

I also chose to sew the taffeta and chiffon panels together by machine, not realizing that stretch taffeta, you know, stretches. The taffeta panels ended up several inches longer then the chiffon one. 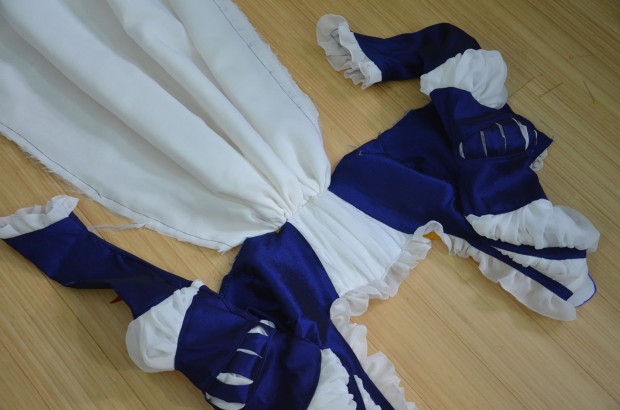 I also had no friggen clue how to gather taffeta. I tried doing it by hand, with a machine, using elastic, nothing worked and this was my end result. 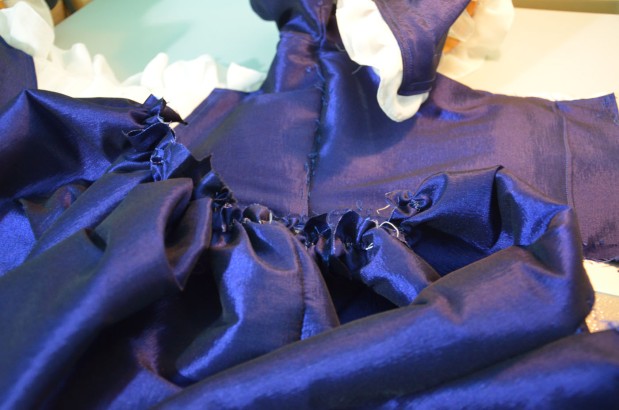 And at the time I said, “Yup, that’s fine” and sewed it on to the bodice.

On take two I ripped out the cringe worthy gathering and uneven panels. I laid them out flat, pinned them, and hand stitched them together from underneath, so the thread was invisible on top. Then I did two rows of gathering – the proper way to gather taffeta. 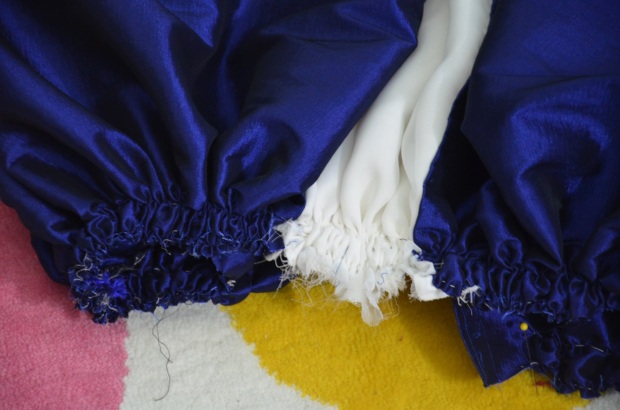 Is that not a million times better? Then I sewed it onto the bodice. 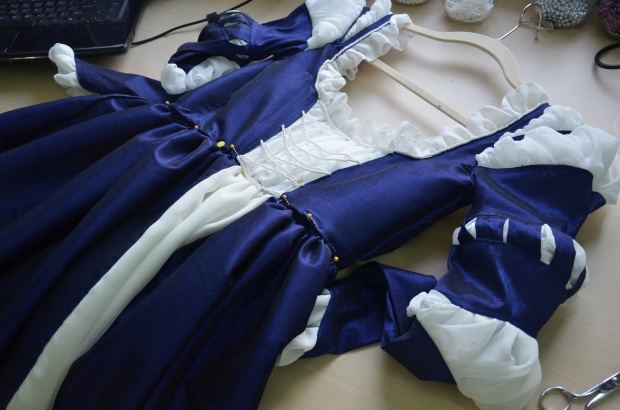 On the left is what it looked like before, on right is the much improved after. 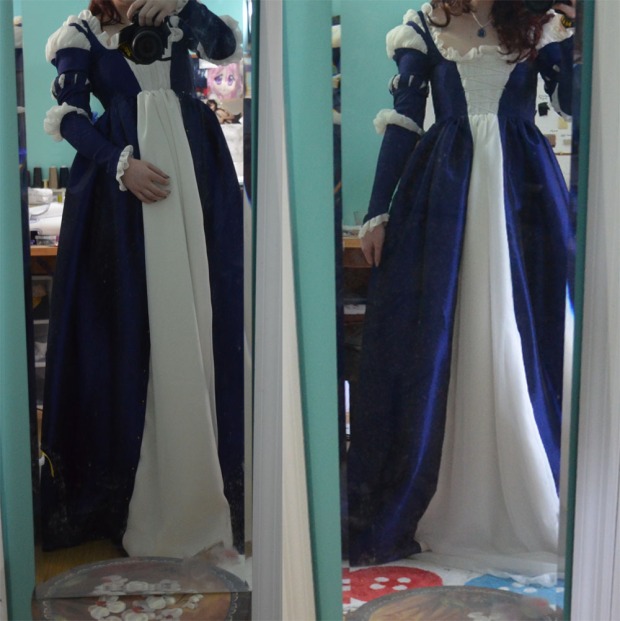 The final thing to work on was the hood! My first hood was a tragic terrible mistake and needed the most improvements out of everything.

This is the hood pattern – it took me ages to draft and i’m still quite proud of it. 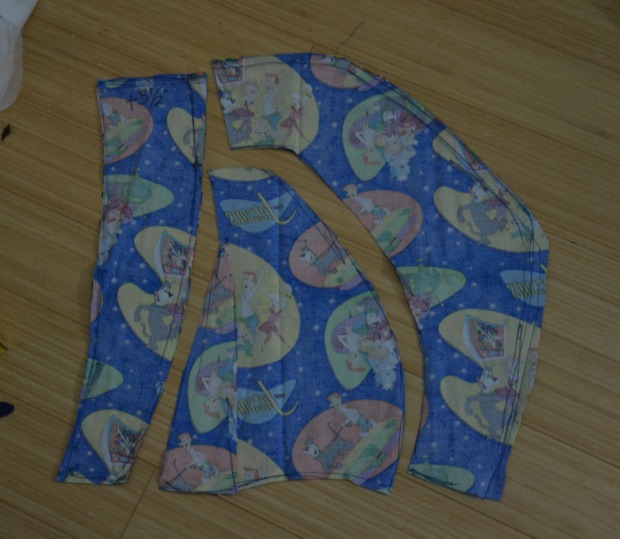 In my first hood I used plastic boning in the brim as a support, and free handed the gathers in the chiffon. Which meant the whole thing ended up horribly uneven. On top of that the thing was really heavy – it had almost two yards of taffeta and double that amount of chiffon in it. Way too much for a flimsy piece of plastic boning to support.

Speaking of the uneven hood – look at this pathetic piece of gathered lining. 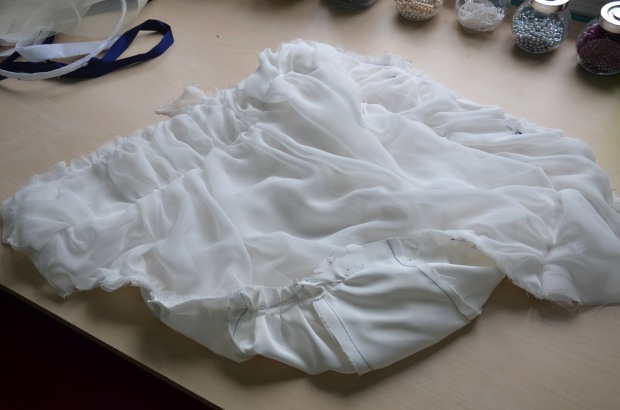 The lining wasn’t salvageable. I ended up taking apart a petticoat made from the same fabric, just so I could remake this hood. Then I dissembled the taffeta layer and used that as a pattern for the lining.

I cut a strip of buckram and then sewed the chiffon onto it by hand – this way there was no chance for anything to be even slightly uneven! 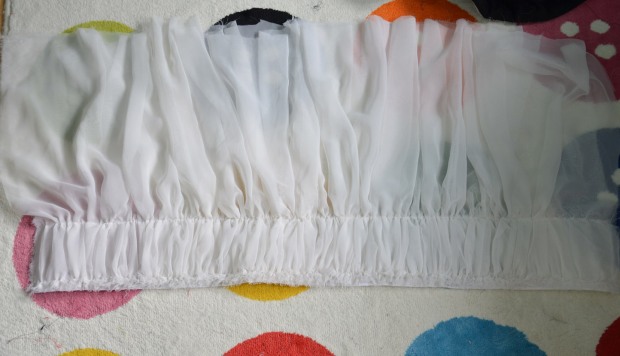 The hood was reassembled – this time taking great care to get everything perfect. All the topstitching was done by hand, and I made matching bias tape to finish the edges. Instead of gathering the edges, I pleated them, which looked much nicer and did a better job of getting the shape I wanted. The bottom edges of the hood have little loops made from bias tape – these are what attach the hood to the dress. The dress has button sewn just inside the neckline.

Then I inserted a strip of hooping wire that I pre bend to the required shape. There was no was this hood was going to be unsupported.

I really wish I had a better photo of how awful this hood was. In most photos I very carefully placed it on my head and took dozens of pictures to get it to look right – if I moved the whole thing would collapse, but you can’t tell that from these staged images.

Anyway, before (take a look at that skirt gathering, too!) 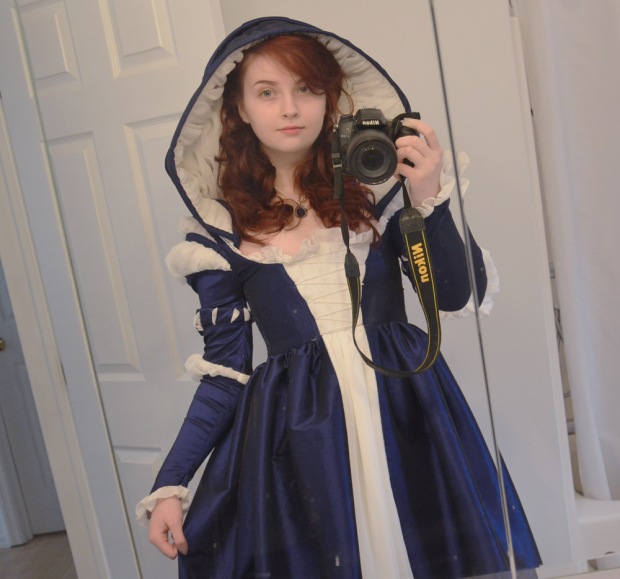 All the dress needed was a hem to finish it off, so I did that, and it’s done! I wasn’t wearing heels in these pictures so the hem looks a little wonky. 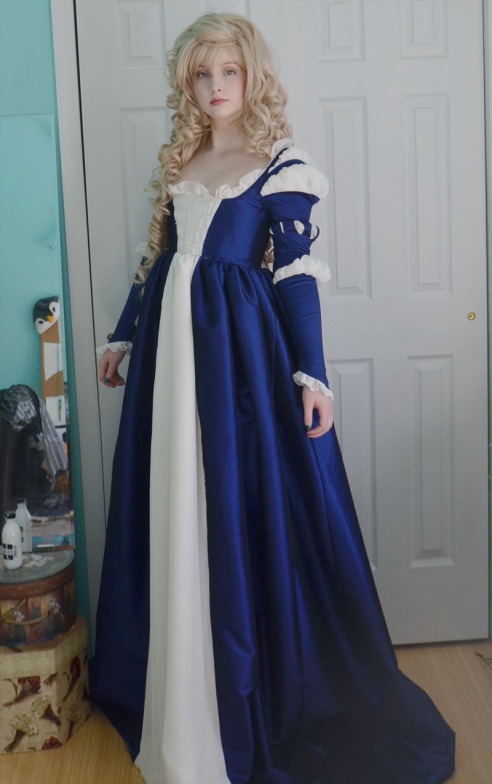 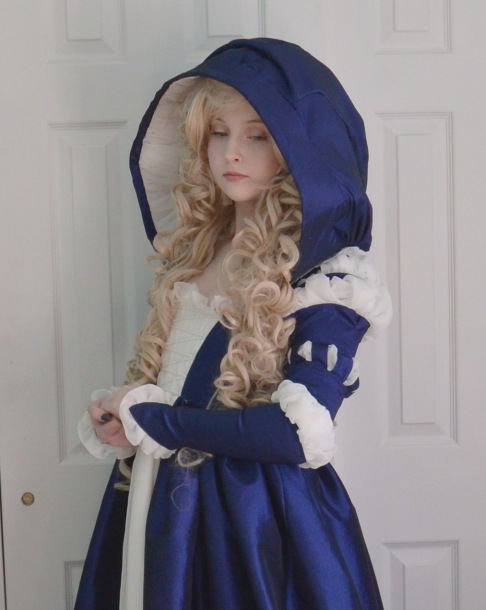 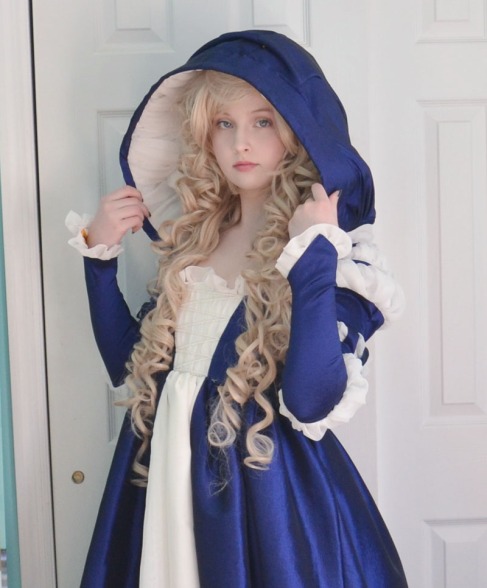 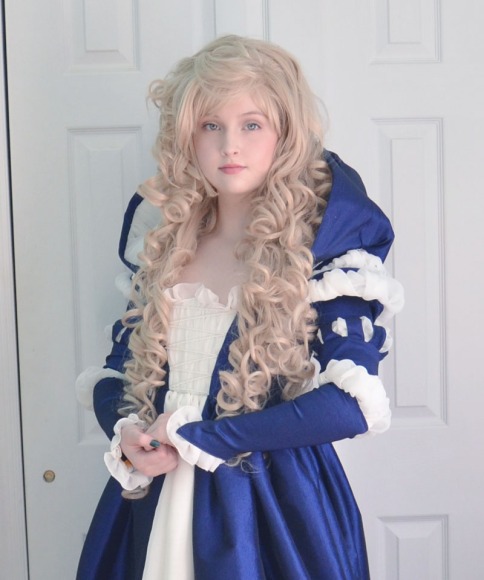 So that’s that! I’m not sure if it was worth all the effort I put into it, but I’m happy I did. There are still problems I can’t change, a lot of ugly top stitching, uneven ruffles, and puckery sleeves. But I did the best I could with what I had.

Now I just have to find a place to photograph it!

Do you have any projects you’ve saved from wreckage? Is this a common thing?