I really love cloaks. They are so dramatic and different from everything in modern fashion. Putting one on makes you feel like a magical princess from another time and world.

So it’s pretty weird that I haven’t actually made one. I made a hooded dress, a dramatic velvet overdress, and even a cape at one point, but never a proper cloak. Horrifying, isn’t it?

But don’t get scared! I’ve resolved the problem and can now officially say that in addition to being a cloak enthusiast, I’ve also made and worn one. And this post is about that process.

I started with a bunch of doodles. Doodles are the best way to figure out how on earth to make something. 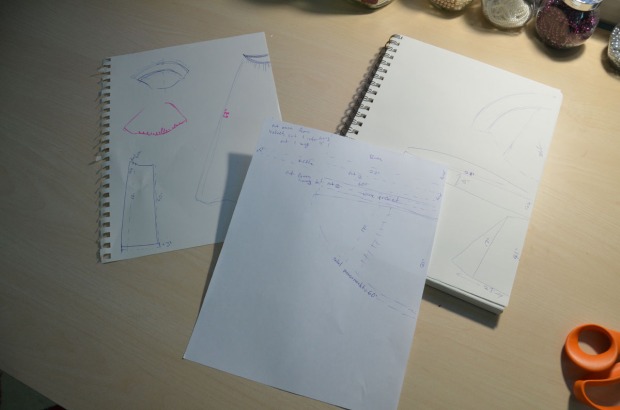 I actually wanted the hood shape to be very similar to the one made for my Blue Dress, but I wanted to achieve the shape through gathering, which meant I couldn’t reuse the same pattern.

On the bright side, there is a lot more wiggle room when you’re gathering, if something is too big it’s easy to gather it down to be smaller, and if it’s too small you can let it out. Because of this I felt really confident – so confident I decided not to make a mock up.

In my defense I probably wouldn’t have been able to get a good idea of the finished product through a muslin mock up. Velvet is so much heavier then most materials, it reacts really differently and I don’t have anything around that will imitate that.

I also have an extra two yards of velvet, so mistakes were acceptable.

I set aside the brim pattern (which is just a long rectangle) and recut the hood pattern from my ivory damask, which I decided to use as lining. Then I basted these pieces together by using the largest stitch length on my sewing machine. 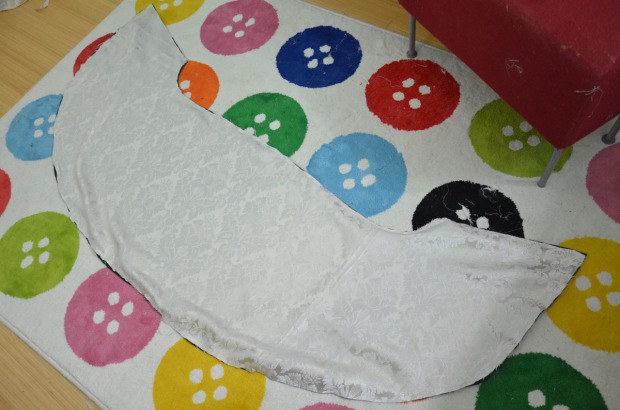 Then I set that aside and began work on the brim. The brim is the most important part since it supports the rest of the hood, and it’s also the most visible piece, so it needs to be very nicely finished.

I started by fusing a heavyweight interfacing to the back of it, this gives it more body, and it also prevents the fabric from stretching.

I cut two strips of my demask material, then I folded them in half and sewed them on to the underside of the velvet brim. These are channels that will eventually house hooping wire, which is what gives the hood shape.

I could have just rolled the edges and been done with it, but I decided to be fancy and add cute little chiffon ruffles. I used three inch wide strips of chiffon which were folded in half and ironed down, then I ruffled them by hand and stitched them onto each side of the brim.

Next I prepared the hooping wire. I used bolt cutters to cut two forty-four inch pieces – I later decided these were too long and cut five inches off each piece. These got threaded through the channels I made, and were then set aside. 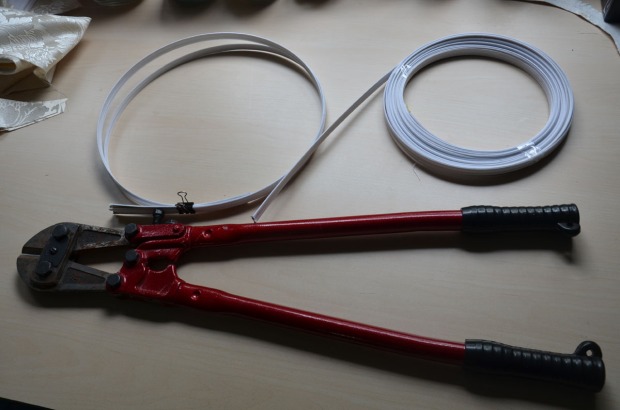 Moving on to the  actual hood piece!  There wasn’t that much to do here, I just had to cartridge pleat it down to the right size.

Once that was done I sewed the brim on and it looked like a hood! Wow.

Though there was still a bit of work left to do on the hood I decided to take a break and work on the cape instead. Capes are really easy, they are either half circles or rectangles that are gathered down. In this case I was using rectangles, I cut three panels of velvet to make up the cape, after they were sewn together the final measurement was 67″ x 118″ or so. 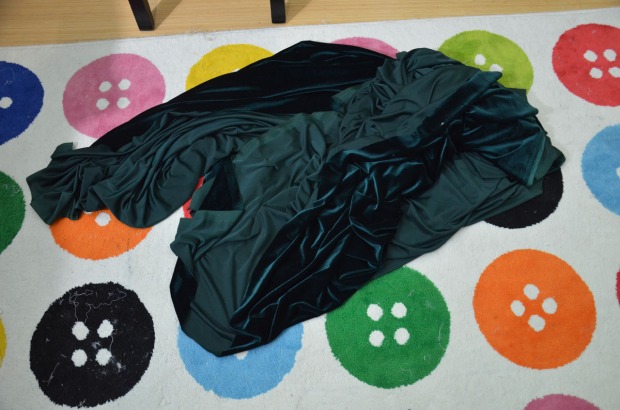 I pinned my hood and cape up on my dress form and it looked like this, already taking shape! 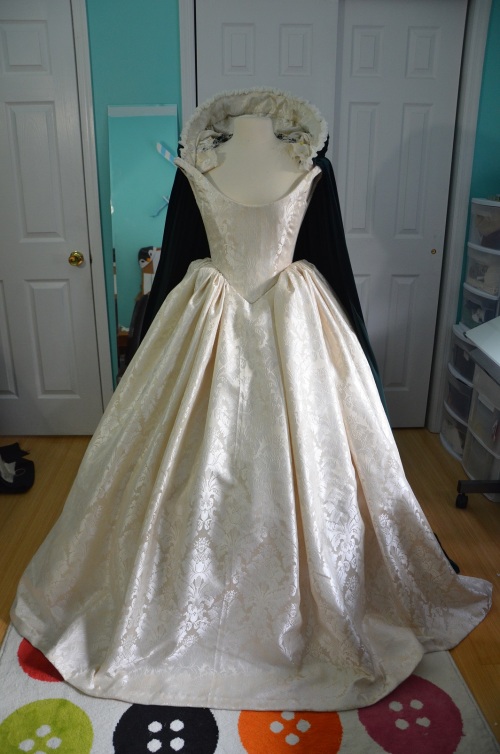 I went around ever edge and hemmed them with a three inch seam allowance. I usually use a slip stitch so you can’t see the thread from the other side, but I found that puckered the velvet. So instead I did two rows of a running stitch, and I kind of like that it’s visible from the other side. It gives it character.

I apologize for the lint – I did all the handsewing on the couch and i’m pretty sure my dogs used this as a blanket for part of that time.

After that was finished the cape needed to be gathered. But first I had to figure out what to gather it onto. I really didn’t want to do the traditional cloak attached to the hood type of thing, because that’s no fun. So I came up with a funky idea that involved these U shaped bits of material. I rolled the edges over and sewed around them, then used a heavyweight interfacing to make these a little more sturdy.

I gathered my cape down with cartridge pleats and sewed it on.

Then I did the same thing to my hood.

I cut away the excess material, then used linen as lining to bind the seam closed. I sewed the edges of the hood piece and cape piece together, so the back ended up looking like this. I think it’s a lot more interesting then the traditional hood back, plus it doubles as a sweat vent in super hot weather.

The last step was attaching hooks and eyes to the cloak and dress so they would stay together. The weight of this thing is pretty crazy, there is no way it would stay on without them. 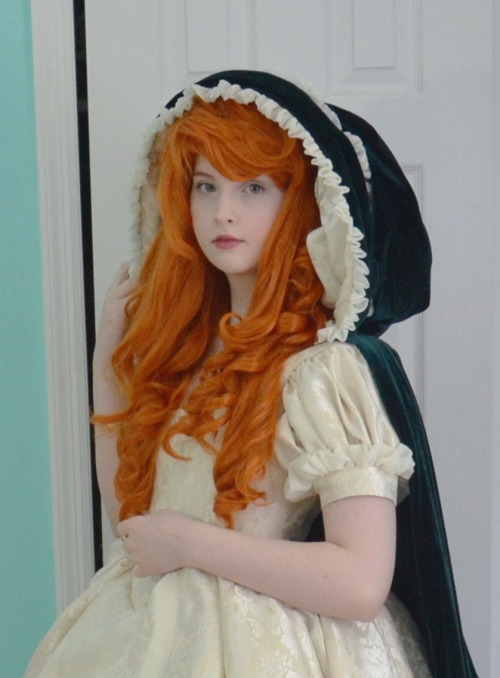 And here are a few of the dress, after trying it on for a few minutes I quickly realized the petticoat will not work – it really needs a pair of pocket hoops underneath it to achieve any sort of shape. But other then that, i’m really pleased with it! 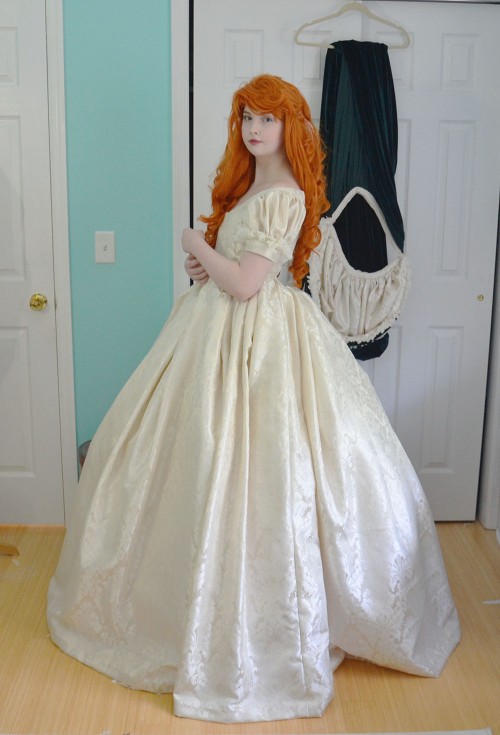 So theres that project, all finished! I currently have a few things in the beginning stages, but i’m not sure what my next post will be about. At this point it could be a regency dress, a tulle ball gown, or a Raphael painting i’m trying to bring to life