This project has been an adventure. And when I say adventure I actually mean a hellish experience that didn’t go the way it should have and turned out quite poorly.

The main inspiration for this project was this dress. I love the stripes, floral accents, and unique cut of the bodice. As soon as I saw it I wanted to make something similar, and eventually I found some gold and red striped fabric at joanns which I thought suited the project nicely.

Now what went wrong: I actually started this dress months ago, I drafted and fitted the pattern, made a mock up, and even began cutting out the bodice before setting it aside and working on other things. When I picked up the project this month I had assumed my original pattern was fine.

Not so much. At the time I started the pattern I knew nothing about 18th century fashion (I honestly still don’t know much) and the bodice was over two inches too long in the waist. I didn’t realize this until AFTER I had assembled my bodice and sewn in all the boning. Every piece of boning had to be pulled out and retipped.

If that wasn’t troublesome enough I also forgot that 18th century bodices are usually bound together over lining, which makes the pieces look very smooth. I assembled the bodice the “modern” way and the end result was really bad…wrinkles everywhere!

The fabric was also  too thick and a relatively loose weave which made lining things up really difficult. And of course the fabric weight added a lot of bulk to the finished garment…

Overall i’m really unhappy with the end result, but I did learn a lot and if I attempted to remake this dress it would turn out MUCH better. Hopefully I can put my new knowledge to the test on a future 18th century court attire project!

With that block of text over, here is how I made the bodice.

This was the pattern I based mine off of, it’s from Janet Arnolds patterns of fashion book. I traced the pattern and then altered it to fit me.

This is what my mock up (from many months ago) looks like. At the time I thought it was perfect but looking back I see soo much wrong with it.

That mock up translated into this bodice pattern.

I used this pattern to cut out the back and front panels. Since I wanted all  my stripes to line up I very carefully pinned my fabric until both sides matched up.

Problem number one appeared at this point since I didn’t cut the front panels on a sharp enough angle. I ended up trashing these later on. 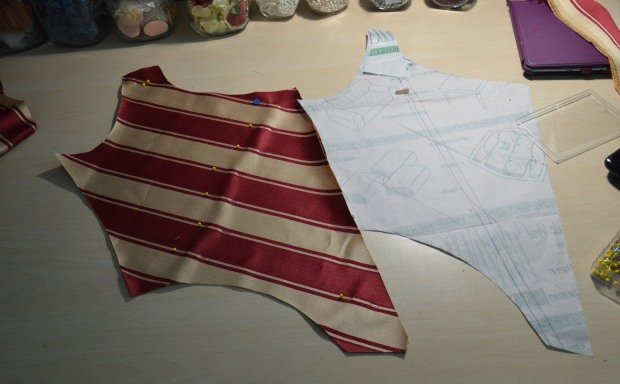 Luckily the back panels turned out okay!

I hand basted these together to make sure the stripes lined up, then machine stitched them. The end result was pretty fantastic in the terms of matching stripes.

Now onto what I’ve done recently! I wanted to take the pattern in a little, add more boning channels, and change the seaming so I ended up remaking my pattern. This is what the new pattern looks like – I really wish I had made a mock up before settling on this. If I could go back in time I would do things so differently!

The back panels did stay the same size and shape so I could use the pieces I had already cut. 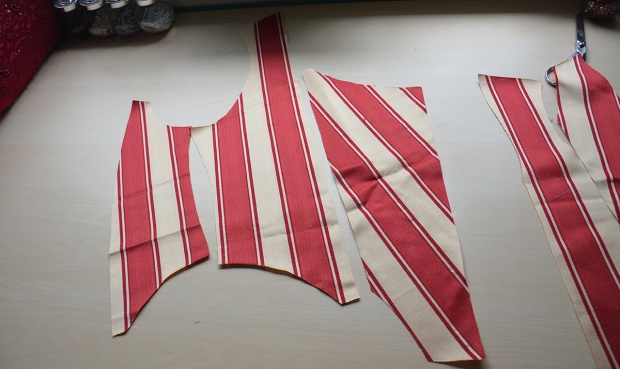 Then assembly officially started. Sewing this bodice together was really slow because I was aiming for perfect symmetry.

The front edges got turned over a half inch. 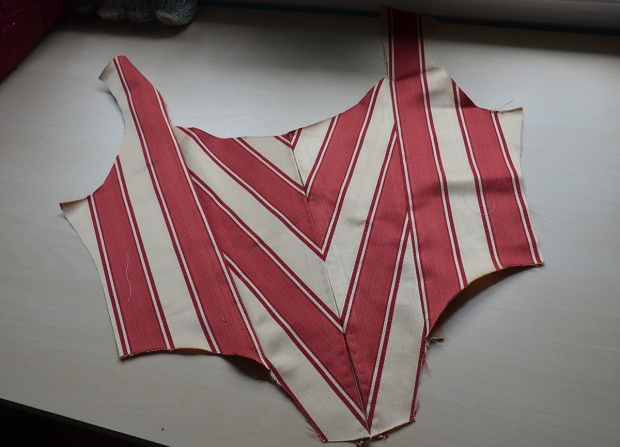 And the side seams got done up as well. At this point I tried the bodice on and wasn’t thrilled with how it looked or fit so I took it in a half inch at each side. I was happier with it after that and figured once the edges were hemmed the length would be okay.

Then the bodice lining was assembled. The lining is made from two layers of cotton twill. I drew out and sewed all the boning channels before assembling the garment. 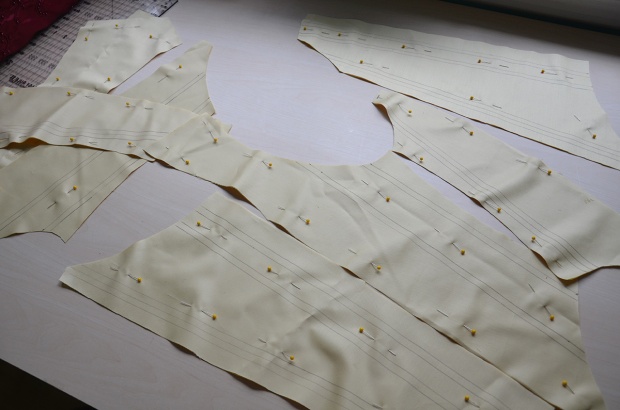 I used steel boning for this, all the edges were rounded with a dremel tool then the tips were encased in athletic tape and dipped in nail polish.

I labeled all the boning and boning channels with letters so it would  be easy to match them up later on. 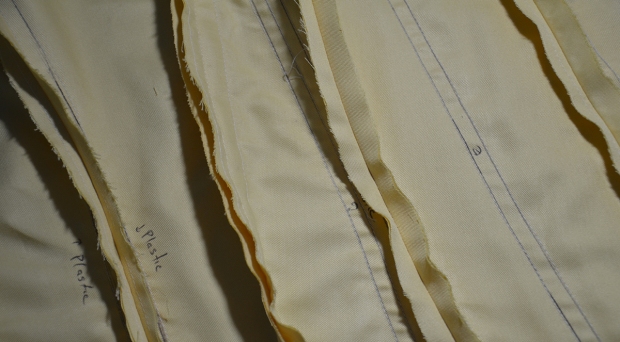 Once all the boning was added I sewed up the bottom edge and tried it on. That was when I realized it was really, really off. I ended up trimming one and a half inches off the lower edge and a half inch off the top. Since both edges are made up of curves raising them that much was nearly impossible to do.

I managed, but it doesn’t look pretty. Once the lining was “finished” I sewed eyelets into the front and tried it on. It’s still too long in the waist but it was impossible to raise it anymore without recutting the pattern…which I didn’t have enough fabric to do. 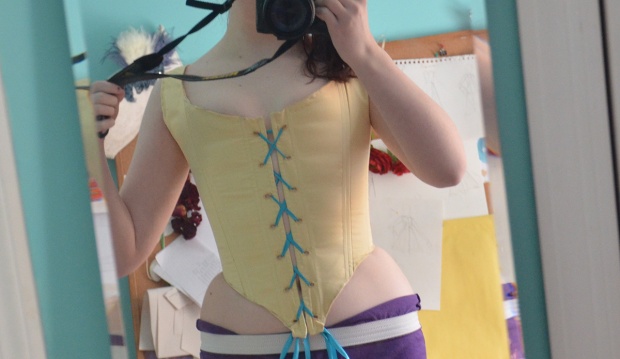 It was a struggle to get the lining sewn to the top layer of fabric, but I managed! Once it was pinned I whip stitched around each edge to secure it in place.

Hooks were sewn into the front as well. I ended up getting a lot of gaping at the front which I fixed by sewing in four more hooks.

Here is the finished bodice before adding the extra hooks. With the added hooks the strips line up a lot better. Overall It’s not a complete disaster but it should be a lot better than it is. What a bummer! 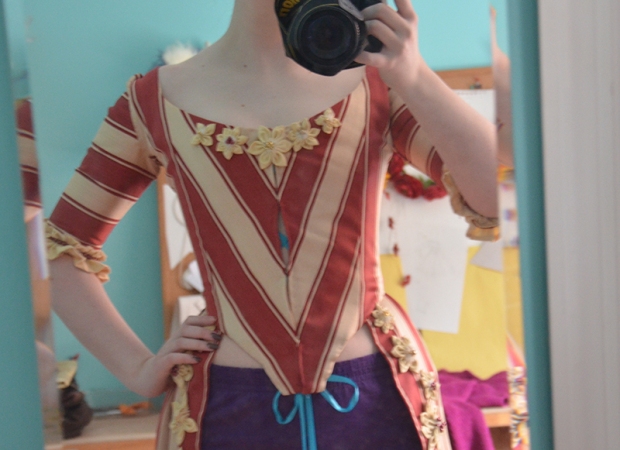 The next post will talk about the sleeves, skirt, and detail work.

3 thoughts on “Attempting to Make a Robe l’Anglaise, Part One”