Today I’ll be talking about the process of making a very ruffly full length petticoat!

I really love petticoats with cotton ruffles because they seem so much fluffier than ones made entirely from tulle or netting. They bounce back into shape really well, even if you store them in tiny balls crammed into plastic bins (which I do). And on top of that they are softer and more comfortable.

My favorite petticoat i’ve ever made is actually a short one made from organza with cotton ruffles, which can be seen here!

I’ve been working on a full length dress that is partially sheer and I wanted a very full, visually pleasing petticoat to wear underneath it. I decided making one with cotton ruffles was a great idea – unfortunately it didn’t turn out as planned. I didn’t have petticoat netting or organza around, so I used tulle instead. I had hoped the tulle would build up well and eventually give  the volume I wanted, but that didn’t really happen.

I do like how it turned out, but whenever I get a bolt of petticoat netting i’ll definitely be adding to it to create the shape I wanted it to have. Anyway, onward with how I did it!

I started by making a sheet that listed all the things I needed to cut out. I decided to make the petticoat six layers, with a small hoop/netting base layer to prevent the layers from falling flat around my legs.

The layers vary in size but each one is between half an inch and one inch longer than the one before it.

Once I cut out all my cotton strips I sorted them  into piles and labeled them. The process is confusing enough when everything is organized well – if you lose track of any strips or have the wrong amount it turns into a nightmare!

The fabric strips were sewn together to created really long strips.

Then they got hemmed, each one has a double hem, which means they get hemmed twice.

The first time the edge gets turned over a quarter inch.

Then it gets turned over again to create a fully finished edge. 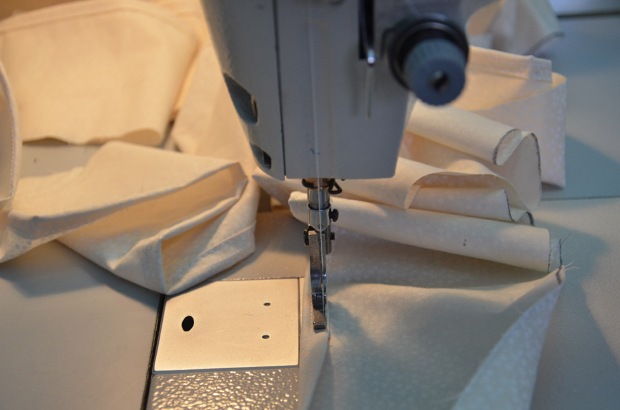 When all the strips were hemmed they were sorted and labeled (again) because as I said, it’s confusing enough with things organized!

I set my strips aside and began focusing on the base layer. The goal of this layer was just to create something that would prevent the layers from getting tangled in my legs. This makes it easier to wear and walk in and adds a bit of extra volume!

To make it I cut a piece of petticoat netting that was three yards wide. I also cut small strips of fabric which were used to finish the edge of the netting and create a channel to thread the hooping wire through.

The edge of the netting was finished, then gathered and stitched to a piece of organza.

Then the wire got added and the waist was gathered. I sewed it up the back with a french seam and left a ten inch slit at the top so I can get in and out of it.

When that was finished I cut out all the tulle. I ended up misreading my sheet of paper and cutting everything out wrong, so I had to redo most of it which was great.

The tulle also got labeled.

Then it was time to start ruffling things! The method I used for this isn’t one I would really recommend, since it isn’t very safe or precise or pretty. But it’s really fast and easy, so for things like petticoats it works amazingly well.

To do it the fabric you want to gather needs to be on the bottom.

Lay your fingers over the fabric and push it towards the feed dogs until the fabric is the way you want it. Make sure your foot is NOT on the pedal during this part! 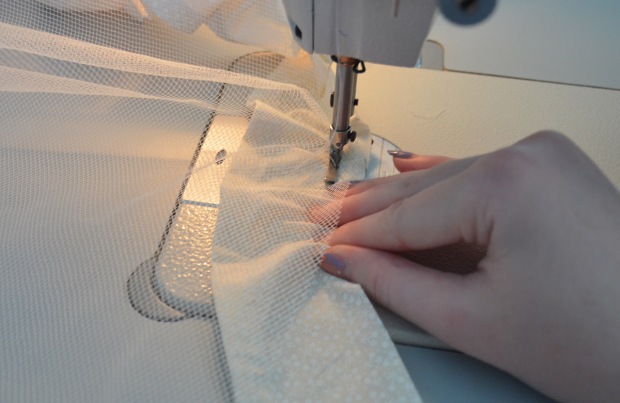 Lay the tulle over your fingers with your other hand, then remove your fingers. The tulle should keep the gathers in place long enough for you to sew over them.

Overall it’s really not the best method but I wanted to gather over a hundred yards of fabric in a few hours and this does a good job of accomplishing that.

After the ruffles are gathered and attached I top stitched them in place. Then that tier of tulle (or for this layer, netting, it’s the only layer with netting) gets gathered down and attached to the larger layer of tulle. The process repeats itself over and over until you get the right amount of volume or run out of fabric – the latter happened in my case!

This is one layer. 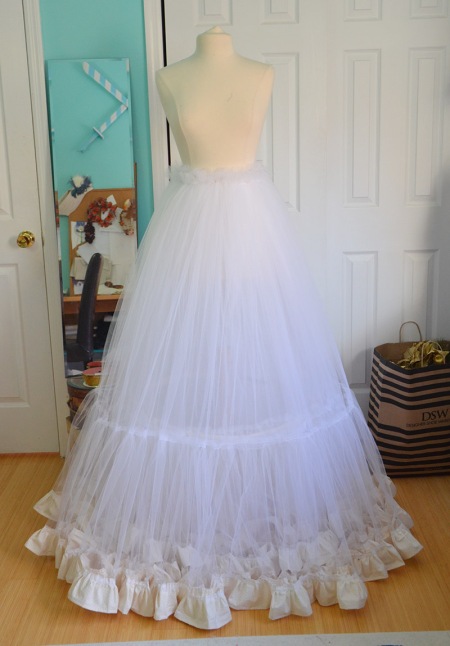 When all the layers were done and the tops were gathered I stitched them together. Then I made and stitched on the waistband – I swear I had photos of this but I can’t find them anywhere! I ended up using the same pattern and process as shown here so I won’t even try to explain it.

So that’s that! It will work for the project I had in mind but it’s not as fantastically full as I wanted. Especially when you put a heavy skirt over it, it sort of collapses.

Thanks for reading – and thank you so much for all the kind comments on my last post! If you celebrated, I hope you enjoyed your holidays!

10 thoughts on “Making a Ruffly Petticoat”