A couple weeks ago I posted about making a set of bodies, which are the first piece I needed for my 16th century ensemble. There are a few other undergarments required for this project (a bum pad, chemise, and farthingale) but I felt like writing about something more exciting: The kirtle bodice.

In the 1500s kirtles were a dress worn over the chemise and petticoats. Sometimes the kirtle would have a support structure, other times it would be worn over bodies. If you weren’t very wealthy the kirtle could be a stand alone dress, but for 16th century royalty they were used as an underdress, which is the function mine will have. It will be made partially from silk, partially from polyester taffeta, and in the end you will only see the collar and front of the kirtle peeking out through the dress.

Step one was drafting the pattern. I used the pattern for the pair of bodies I made as a base, then altered it to have a higher neckline, side openings, and a much shorter front. I also switched it so the straps connected at the front instead of tying on the shoulder.

I made a few mock ups before finalizing the pattern – you can see all the stages it went through!

Since I was working with limited amounts of silk, I decided to make the majority of the garment from polyester taffeta and only have the collar be made from silk. This technique was shown in the book “The Tudor Tailor” and I thought it was very clever!

Here are all the pieces cut out.

I used interfacing on the collar portions to add a bit of stiffness, which should help when beading it later on.

Then the pieces were sewn together.

I turned the side edges over and added two pieces of boning, spaced a half inch apart on each side. These provide support for the eyelets. I also stitched a half inch away from the edge at the top and bottom of the garment, these serve as a guideline for where to turn the edge over.

The edges got turned over and stitched down by hand. 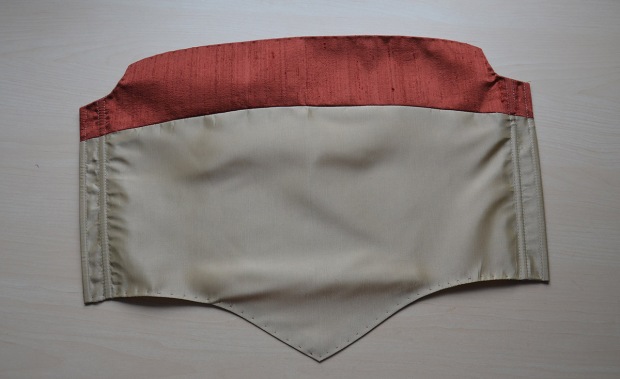 Then I cut out the lining – the lining was cut as two pieces instead of four, since I had plenty of fabric to make it all one piece. 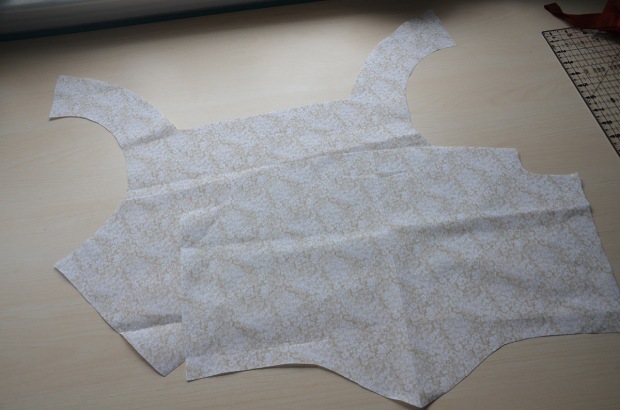 Before sewing in the lining I added a some lace (like a lot of the lace i’ve used recently, it was from my grandmothers stash) around the neckline.Then the lining got stitched in, also by hand.

And I did up the side seams with eyelets!

At this point I decided to try it on. And that’s when I realized things weren’t going as well as I thought. The ease of my final, interfaced fabrics was much different than the cotton I used for the mock up. And I feel really super extra dumb that this happened because one of my new years resolutions was to be more careful about the fit.

It was too small at the sides, but the biggest problem was the straps being an inch too short and the neckline not being wide enough. The kirtles in the mid 1500s would often rest so far on the shoulders they almost look like they are going to fall off! (Seen here)

I didn’t want mine to be that dramatic…but the proportions of this bodice were definitely too far off to be salvageable. I would have had to add extra material at the center front and at the shoulders. There is no way to make that look good.

So despite my hours of pattern drafting and hand sewing I threw the bodice away.

I tried to get a photo first, but it was impossible to even get it on properly.

So that brings me to bodice attempt number two! The key changes here are that I made the neckline almost an inch wider and added more space to the side seams.

To fix my strap troubles I cut them as part of the front bodice panel and added an extra half inch in the center of them. To make sure they would still be long enough (even if the fabric becomes stiffer with the lace and beading added) I left a one and a half inch seam allowance at the back. That better be enough!

On top of that I was also pleasantly surprised to find after cutting the kirtle skirt I had enough material leftover to cut the entire kirtle bodice from silk! Unfortunately the front and back panels aren’t cut on the same grain line, but it’s better than having it from two separate fabrics.

Here is the first try on – they were actually too big! I ended up stitching a quarter inch seam up the center back and took them in a quarter inch on the sides, so the whole bodice became over an inch smaller.

When all the alterations were done I stitched boning into the side edges, and stitched a half inch away from the boning to create a guideline for my eyelets. I did a really poor job stitching these, so it’s a good thing they will get ripped out later!

I also turned all the edges over by a half inch. 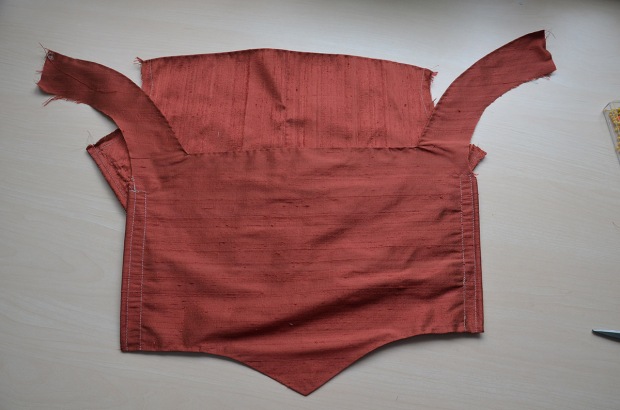 I sewed lace around the neckline and recut the lining. It got stitched in the same way it was on the first bodice. I left the bottom edge of the lining open so the skirt can be attached later on.

That’s it for this post! This bodice is far from finished. It will eventually have elaborate beading at the neckline, but i’ll save that for another post.

7 thoughts on “Making a 16th Century Kirtle, Part One”