Today (well, yesterday) I was supposed to post about finishing my Fluffy & Feathered dress. Unfortunately I didn’t get around to taking the photos required for that post, so that couldn’t happen. However, I have a new project to talk about, which is always exciting!

Right now i’m not in a very positive place project wise. I’ve hit a lot of roadblocks with my tudor costume and realized I have to accept that it won’t turn out the way I wanted. That is a very frustrating position to be in, even if it is part of learning.

After two days of moping around and doing a whole lot of nothing I decided it was time for a procrastination project! I was aiming for this to be a forty eight hour project, but due to some setbacks it ended up becoming a seventy eight hour project. Oops.

My main inspiration for this dress was this painting, and how Saints were depicted in [early] Renaissance times. I’ve wanted to make something soft and draped for a long time, so this seemed like a good opportunity! I decided to use navy satin faced chiffon for the dress and brocades for an undershirt.

Since chiffon is sheer and far too flimsy to make a dress with this shape I’m lining it with navy gabardine – I’ve had this fabric for a good two years so I was happy to find a use for it!

I had five yards of gabardine and seven yards of chiffon for this dress and I used almost every scrap, so that worked out well!

This is the sloppy little sketch I did before starting.

Step one was draping the bodice! I still really need to make a proper write up on how I do this…but I really don’t have a specific method, I just pull the fabric around until it fits the form tightly. Then I draw the seam lines and trim any extra material. 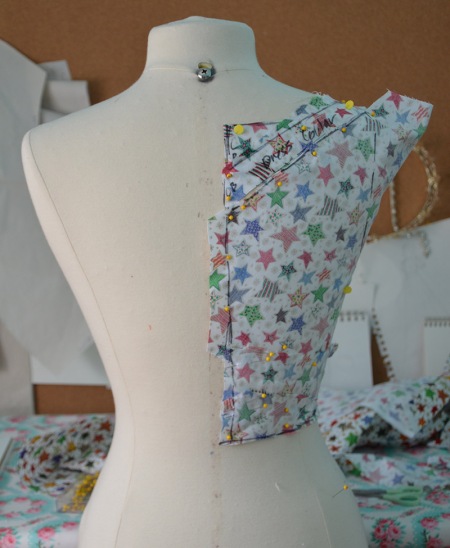 After I was happy with it I removed the fabric from my dress form and ironed it. This is what it looked like when laid flat!

Which got turned into this. 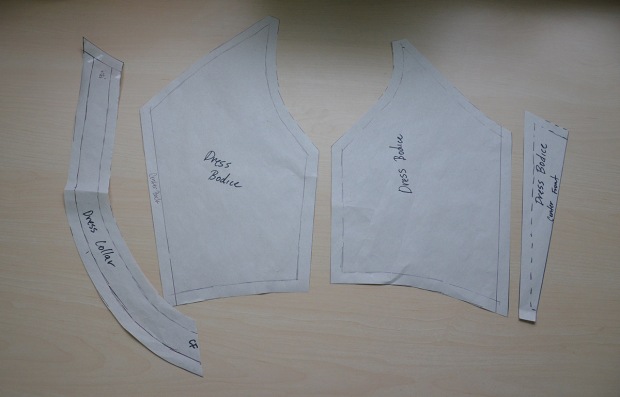 Unfortunately since I was trying to make this quickly and because I worked on it at night, I wasn’t very good about photographing the process.

Luckily it is pretty easy to explain! I started by cutting the pattern from gabardine, which will be used as the bodice lining and as a base. This post is going to be almost entirely about working with the gabardine, since I had to completely assemble a skirt and bodice with it before even touching the chiffon. The chiffon gets draped overtop of the gabardine later on.

Once the  pattern was cut I turned the edges over by a half inch – I used my machine for this, which is kind of rare for me! Once the edges were finished I assembled the pieces. Below you can see the collar pinned in place, ready to be attached. 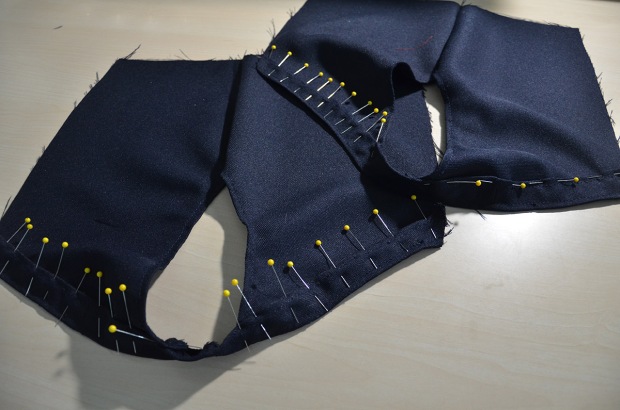 This is the bodice lining finished! I used an ivory jacquard for the center piece. 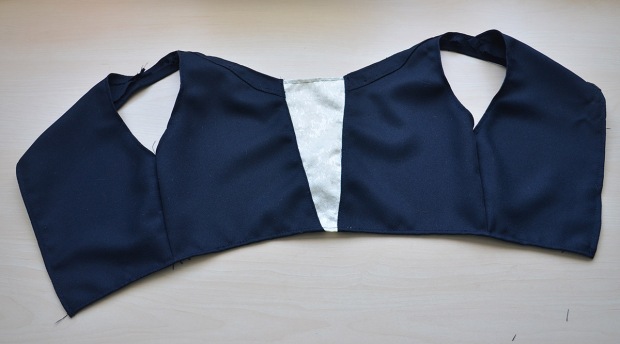 And here is the first fitting. In my rush to make this I neglected to do a mock up, so I was thrilled to see it actually worked! 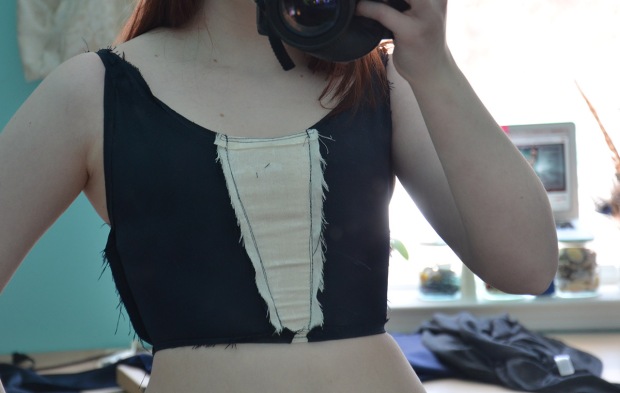 Then it was time to start on the skirt. I chose to make the skirt a rectangle since those are fast, easy, and an effective use of material.

I decided to hem the gabardine layer with horsehair braid to give it a bit more volume. This is cheap, kind of crappy horsehair so it didn’t add much “oomf” to the dress, but it certainly didn’t hurt!

And here it is on a dress form! I’m intentionally leaving the hem very long, because it was quite common in paintings from the middle ages. And it helps differentiate it from my other dresses, which I like.

The last step before beginning work with chiffon was adding the lace up front panel. Since I was working under time constraints I decided to just stitch it down instead of making functional laces.

The panel is cut from jacquard, then I used a piece of lace as an overlay to add texture. 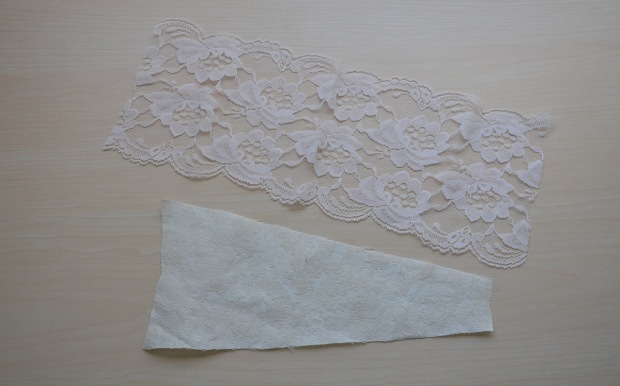 The lace was gathered overtop the front panel, then stitched down.

I made marks every three quarter inches down each side, then cut pieces of leather covered cord. These will serve as the “laces”. I used a tiny stitch length and backstitched over the ends of the cord to make sure they were secured over the markings I made earlier on.

This was the end result! 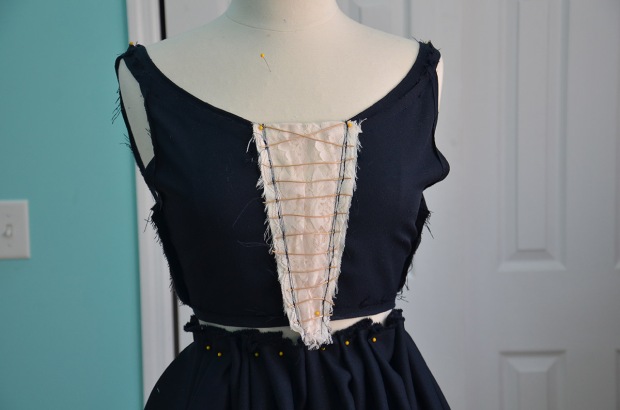 Ok so it looks like a big mess. But I promise it turns out okay!

Thank you for reading, and hopefully I will be better about posting next week!

7 thoughts on “Making a Pleated Navy Gown, Part One”