The skirt base is a really big circle skirt cut from striped upholstery material. Unfortunately at the time I bought this material my math skills failed me and I purchased wrong amount. I only bought three yards and I really needed another eighteen inches. I had to crop the front and back of the skirt by four inches just to cut the skirt out. Yikes. 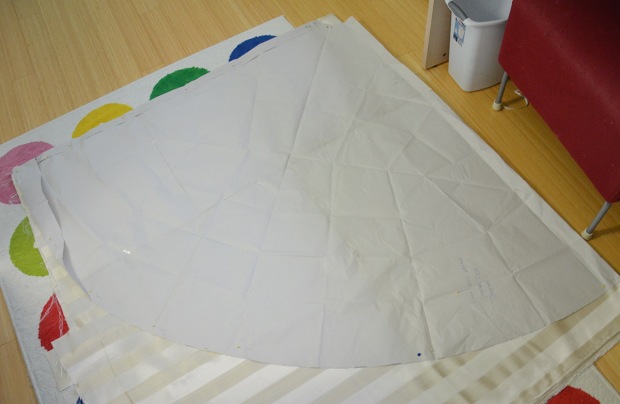 Here you can see how that ended up looking on my dress form. Do you see the problem?

Luckily I had a plan that would cover the hem! It would involve the three yards of organza I bought without  a real purpose in mind.

So I did a rough patching job that lengthened the front of the skirt. It was pretty ugly, but it’s okay if it’s ugly, I can cover that up later.

(that could be my personal motto) 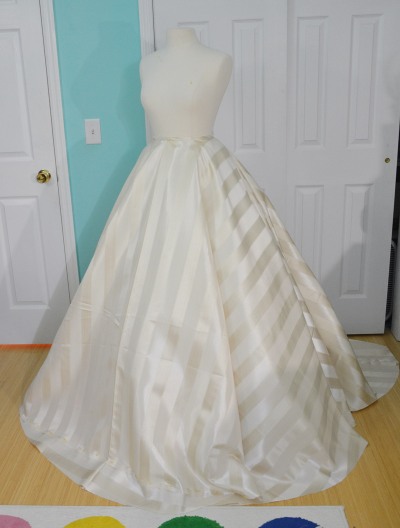 The back of the skirt was also too short, so I used leftover fabric to make a train. I planned on using the organza to cover the seam, so the stripes not lining up shouldn’t be noticeable in the end.

With the skirt the right length all the way around, I could move onto hemming! I started by stitching a half inch away from the lower edge. This was done to prevent fraying more than anything else.

It still frayed a huge amount in some spots, so I trimmed those places with pinking shears.

Then I used a basting stitch to turn the edge over. 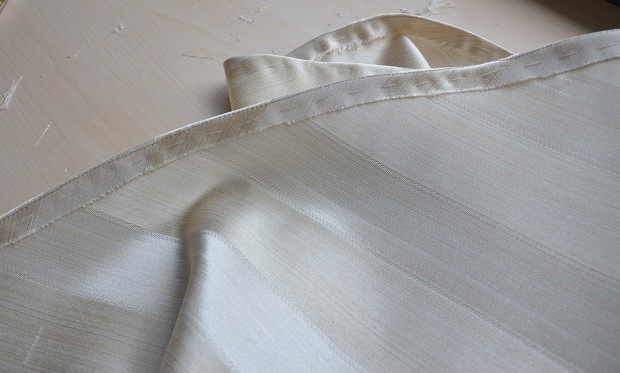 And then the edge got turned over again, this time by two inches.

I sewed that down, by hand, with a whip stitch. This hem was ridiculous, I think it was six yards long or something similar. It took all afternoon to finish! 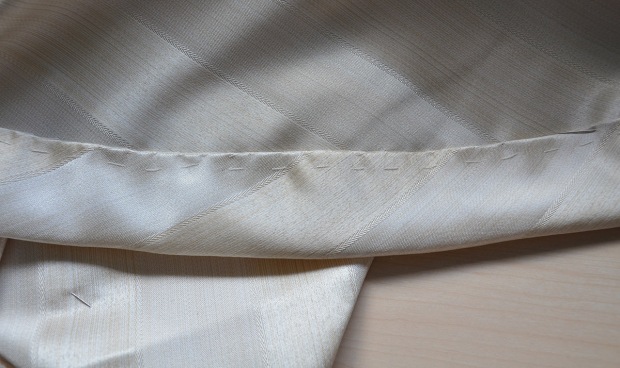 It was around this point that I felt the skirt looked a little boring. So I decided to paint spots up the back of it. The logic here was “My Orchid has spots, so my dress should have spots!” which seemed like a bright idea at the time. I drew these spots out with a colored pencil, then filled them in with a jacquard paint in the color “violet”. 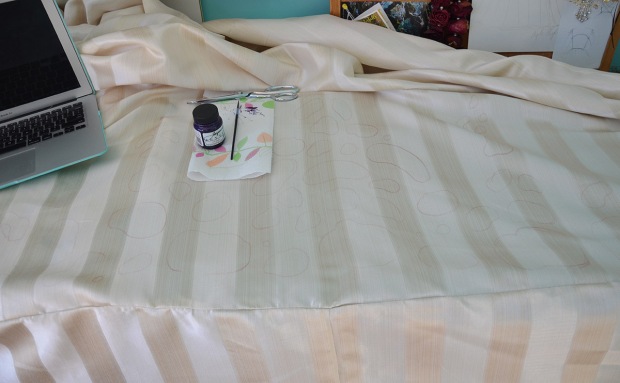 After putting on the first layer I had a “Oh god what have I done” moment of immediate regret. I definitely didn’t love how it looked, but by this point I was committed so I kept going.

The paint wasn’t as opaque as I had hoped, so I did a second coat with a setacolor ink. This stuff wasn’t very opaque either, but I was running out of it so I decided two coats would have to be enough! 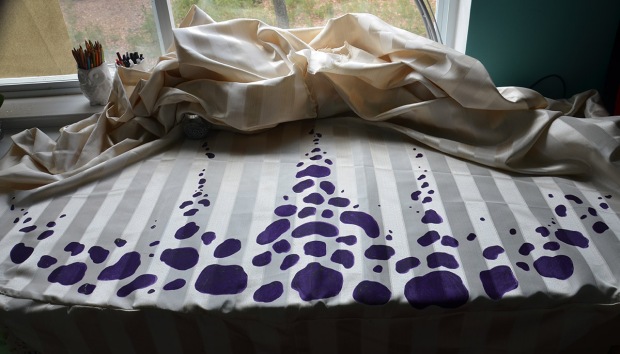 With the spots done it was time to decorate the hem with organza. I debated about what technique to use, but finally decided to sew it into tubes and to tack them down kind of haphazardly. It all sounds very strange but I had a vision!

Here are the strips of organza.

They got sewn into tubes, then the seam allowance was trimmed down, and they were turned rightside out. 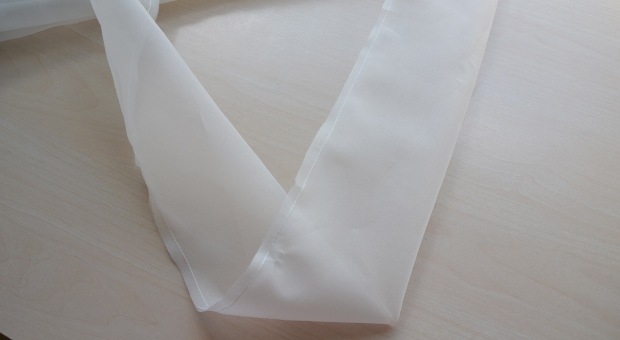 I had a few different sizes. I really wish I had bought more organza because I didn’t have nearly enough. I had hoped to use some of these on the bodice and top of the skirt but I needed them all for just the hem, 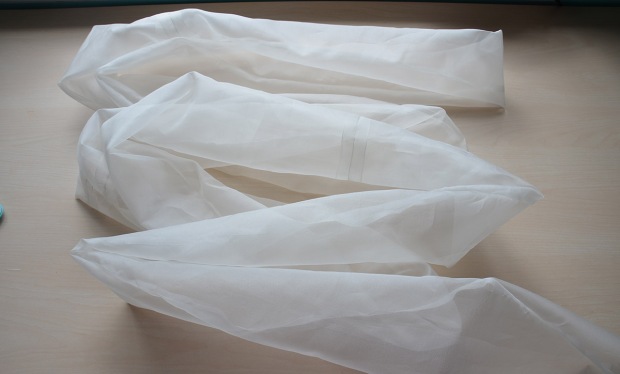 I didn’t steam or iron any of the tubes, so they still had a lot of volume after being pinned and stitched onto the hem. I also used all the remaining mesh from my Fluffy Feathered Dress to make it look like flowers were growing up the dress. I’m pretty happy with how this turned out, though I wish I had more organza so I could have made the strips wider and the effect more pronounced.

With the bottom of the skirt done, it was time to focus on the top half – I guess this part could be considered a peplum, but that isn’t a word I think of applying to part of a ball gown!

These are the pieces that drape down from the bodice in petal like shapes. I drafted these by hanging my few remaining pieces of organza from the waistline, then trimming them into the correct shape.

Once laid flat they looked like this. I sewed the darts and cleaned up the edges.

Then I finished those edges off with home made bias tape. 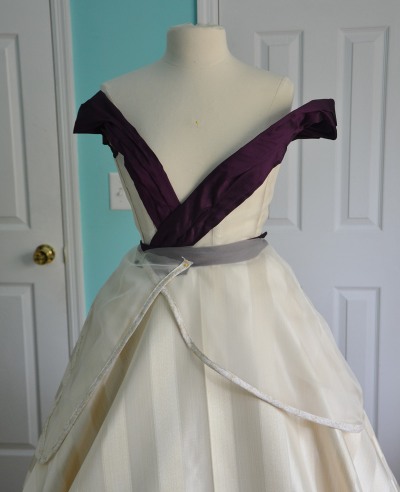 Now it was time for the draping! This would be done with purple taffeta, like the bodice was. I used the same technique and cut strips of taffeta which got folded in half and stitched up the side, then turned right side out.

After a lot of pinning I came up with something I liked!

So I took it off the dress form and tacked the strips down so the draping pattern would stay put. Then I stitched the tops of the “petals” together so sewing it onto the bodice would be easier.

But before sewing anything I decided to make another piece for this dress: A bow. I cut three more strips of taffeta and sewed them into tubes (see a running theme with this dress?) then folded the edges into points and whip stitched them closed.

Then I put the bodice, skirt, peplum, and bow onto the dress form just to make sure everything looked the way I wanted. 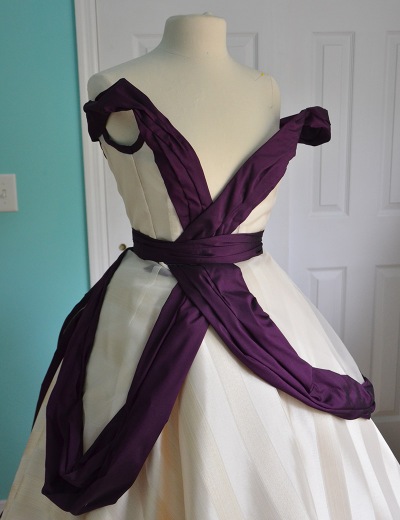 I was really happy with the draping and placement of everything (and the bow, I always love a good bow) but I thought the skirt was lacking in volume. Though it had tons at first, my petticoats have a habit of deflating, and after two weeks of working on this project the skirt had shrunk and looked pathetic.

But any good seamstress should have a bolt of petticoat net on hand! And I did! I cut out a few large rectangles and sewed them into strips.

Then the lower edges got trimmed with home made bias tape so they wouldn’t catch on anything. 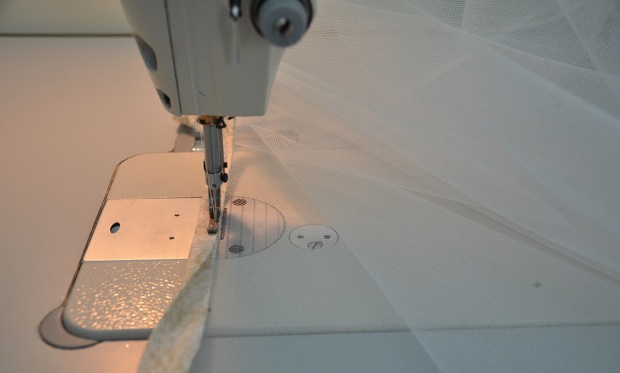 The tops were gathered down and stitched together.

And in no time at all I had a netting lining for my dress!

Now I felt comfortable sewing everything together. But (isn’t there always a but?) I had to fix up the opening in the back first, because it had turned into a frayed mess.

I trimmed back the worst of the frayed parts, then attached taffeta bias tape around the opening.

I also sewed a zipper underneath the bias tape, but for some reason I didn’t take photos of that part.

Now I could finally begin assembly! The peplum was sewn onto the skirt, then the netting was sewn in. The photo below shows the netting just before being tacked to the interior of the zipper.

With all the layers together I could finally attach bias tape to the top. This prevents fraying and any scratchiness from the netting.

And then the bodice got attached!

Here is how it looks finished! I wish I had photos of the back but this dress is too big for my room, the train ended up being cut off in every picture. 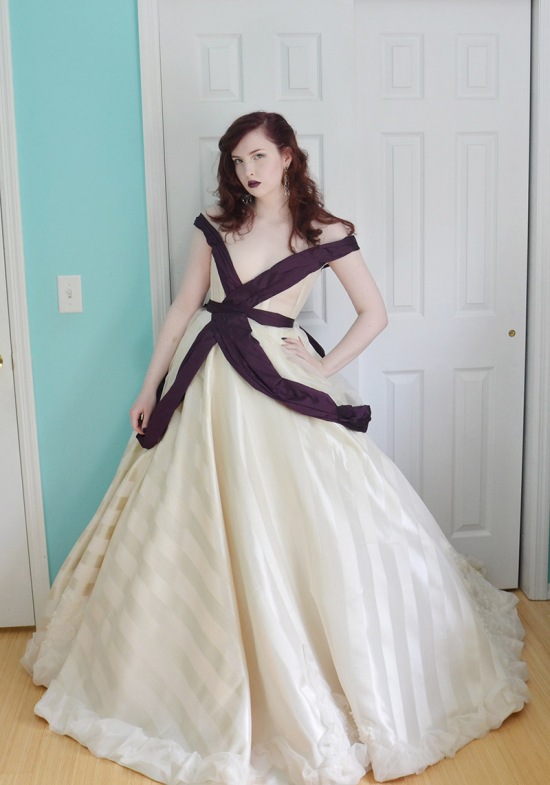