So I skipped almost two weeks of posting. In my defense, I was traveling for a week of that and fully planned on updating while in hotel rooms. I had several hours to kill most evenings, and nothing to do but blog! Unfortunately that plan didn’t work out since none of the hotels had reliable internet that allowed me to access wordpress, much less post anything. When I got home I had a rough time getting back into my routine, but i’m back!

I really wanted to make this post a progress report, since I have several projects in progress right now and plans for a few exciting ones. But I figured after two weeks a “The Making Of” would be more appreciated. So lets go through the process of adding a skirt to my tudor costume. If you are unfamiliar with this project, the previous posts can be read here.

I’m not sure where the photos of this laid out flat went, but I can’t find them. I think my folder with the first five photos or so got deleted, which is a shame. On the bright side,  the skirt pattern was really simple, two rectangles plus a rectangle with an arched bottom to create a train. If I had another two yards of material (which I planned on having) the train would be longer and the skirt would have two extra panels.

The panels were all sewn together with french seams. Then the lower edge was turned over by a half inch and basted down. Then it got turned over my an inch and a half and pinned down.

Then that was stitched down with whip stitches.

The side edges of the skirt also got turned over by an inch and a half. I stitched down both edges of the fabric with tiny running stitches.

Since this fabric is pretty thin and cartridge pleating works best with thicker fabrics I decided to back the top few inches with flannel. I cut several strips of flannel and folded them in half.

Then I sewed it on.

The top edge was fraying like crazy, so I decided to cover it with bias tape. I had some of the damaged damask leftover and decided this would be a good use for it. I marked out all my two inch wide strips.

Then cut them out and sewed them together.

I ironed the raw edges inward and I had bias tape! 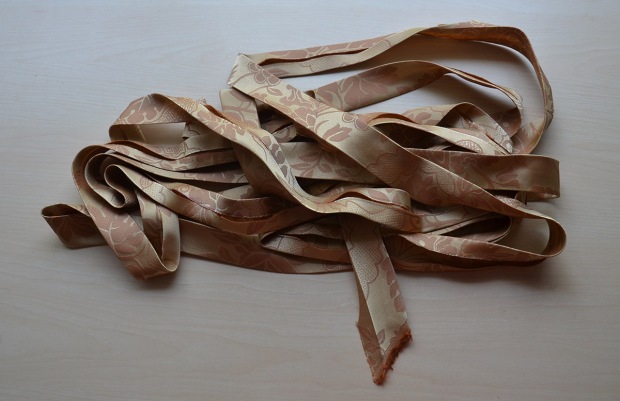 One edge got sewn on.

Then it was folded over the top edge and pinned down.

Now it was time for pleating! I used chalk to mark two lines that are one and a half inches apart. Then I drew a line every four inches, which is how big the pleats will be. They are massive.

I used upholstery thread to pleat everything so there was no chance of my thread breaking. Here is how it looked after being pleated. 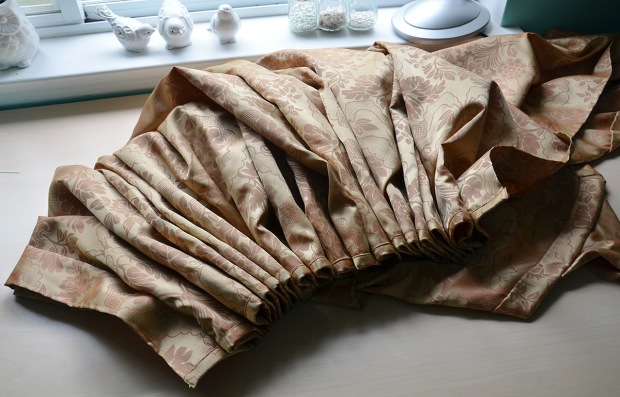 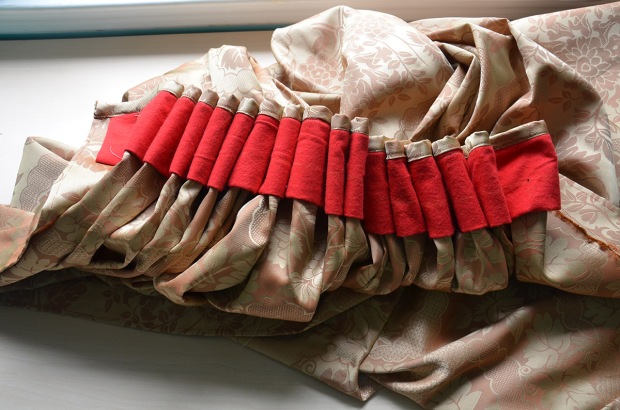 I was really happy with them until I pinned them onto my bodice. After I pinned them I realized cartridge pleats at this size collapse down and look a lot like normal box pleats. They do fold underneath and give a LOT more volume than regular pleats do, but i’m still a little disappointed! 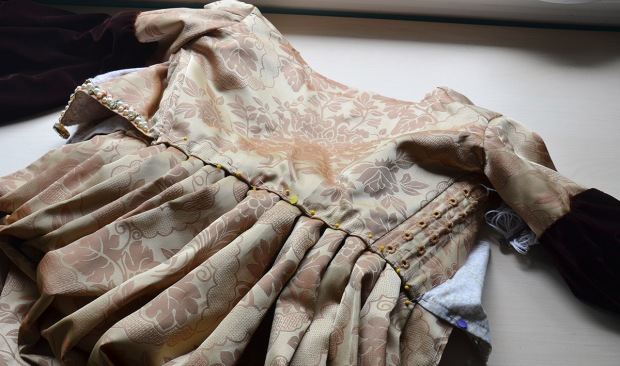 I sewed the skirt on with small whip stitches and upholstery thread…then went over my stitching again because I did a terrible job. I could fit my whole nail between the stitches! 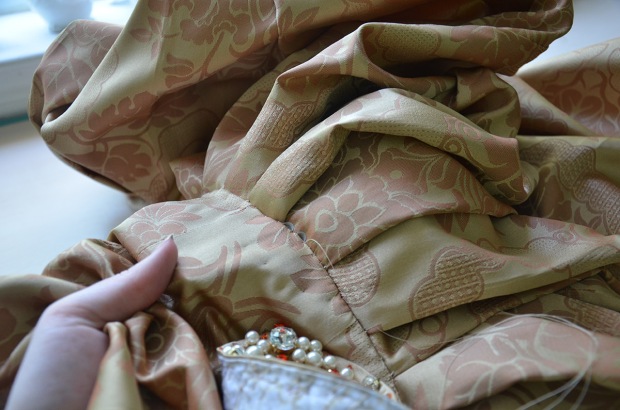 And that is it! The skirt was done and my dress finally had a lower half.

Here is a teaser – in my super dusty mirror – of how it looks worn! 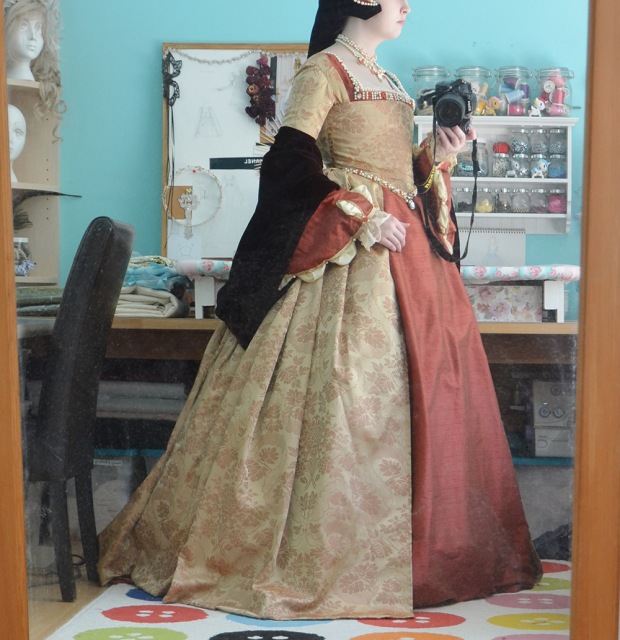 I’ll be taking proper photos (maybe with a nice backdrop, if I can set something up) within the next week or two. But in the mean time, I did a video about this project which shows some close ups and the order everything is worn! That video can be watched below, or through this link.

This project is complete, but I still have a couple more blog posts to write about it, so you’ll be seeing lots more on the topic within the next little while.