We are onto the final blog post about Cinderella! And more exciting than that, once I finish writing this I don’t have to see the dress ever again!

Can you tell i’m still a bit annoyed about how frustrating this project has been? I was so looking forward to having a fun/sparkly/easy side project. I expected it to take two weeks, if that, and here we are two months later and it’s only just been finished. Sometimes projects don’t go as planned, and this one definitely didn’t.

But it’s done! And it actually came out pretty cute.

I made the skirt from two rectangles and a lot of gored panels (which were just rectangles cut in half diagonally). The fabric wasn’t wide enough to cut it as a partial circle skirt, otherwise I would have done that.

All the pieces were sewn together with the wrong sides together, then the edges were trimmed and sewn into french seams. 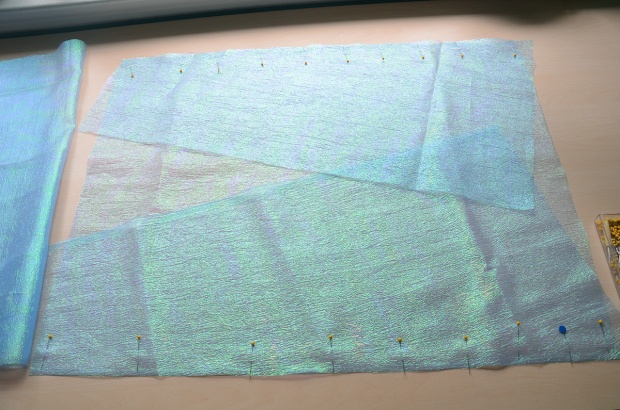 Since the skirt was made from rectangles and triangles the hem was pretty blocky and uneven. I cut one half to the shape I wanted, then used that side as a guide for cutting the other half.

After being ironed, this is what it looked like!

It was really sheer, so I decided to use chiffon as lining. I used the skirt as a guide to cut the chiffon down to be the same size….or at least close to the same size. I did a sloppy job on this part!

I sewed up the back edge of the chiffon with a french seam. Then the lamé layer was pinned to the chiffon, with the right sides facing each other.

I sewed a half inch away from the hem. 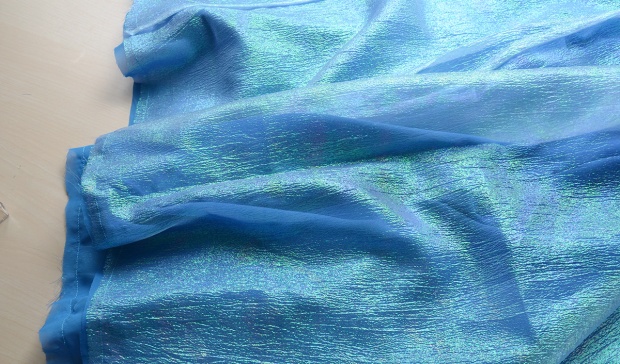 Then I turned it the right way out and stitched a quarter inch away from the hem.

And I also sewed across the waistline to prevent the chiffon from drooping down and being visible. 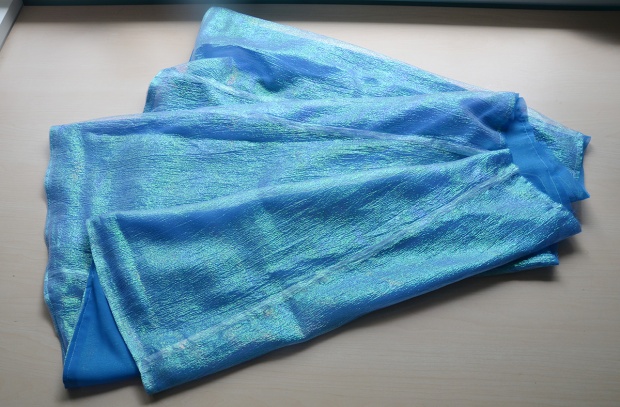 I knife pleated the top of the skirt down to twenty five inches. 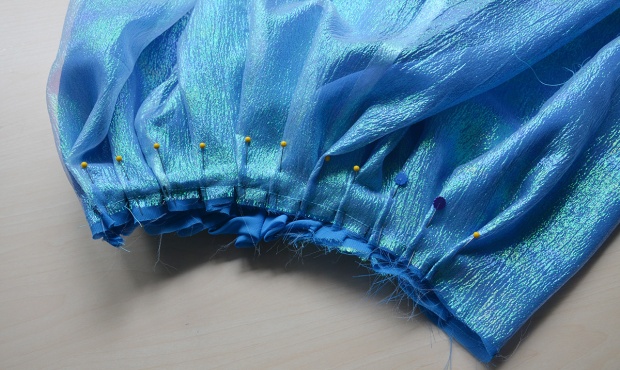 And sewed across the top.

I cut a slit up the back to help me get the skirt on and off. I used bias tape to finish the raw edges, but I didn’t take photos of that part.

I made the last minute decision to add a ruffle. I felt like the hem was missing something and when in doubt always add ruffles.

For the skirt overlay I gathered a five yard block of tulle down to the same waist measurement, then sewed it to the top of the skirt. I like the effect this gives, but I really needed more tulle. If I did things again I would probably use ten or fifteen yards of tulle, and have two separate layers. That would create way more volume and give the skirt a nicer silhouette. It would also hide the seams in the lamé a bit better.

I think the way it looks now you can kind of tell it needs more tulle. It just doesn’t look right to me.

And the final step was attaching a waistband. I made mine from more lamé which was fused to interfacing to add the necessary stiffness.

The waistband got pinned on, then sewn. I also sewed a snap onto the centerback to keep it closed. I opted to keep the skirt separate from the bodice just to make it easier to get into and store. But I can always sew them together later on if I feel like it. 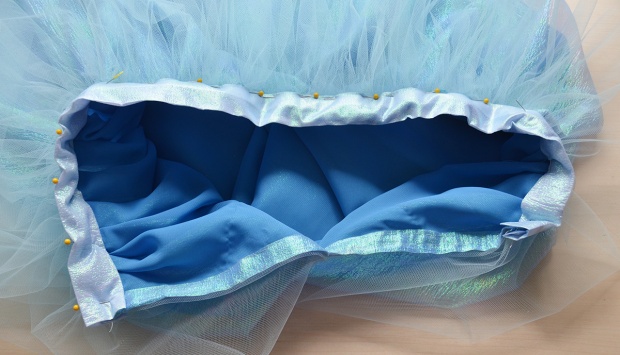 Now, with the skirt finished, it’s time to complete the bodice. In my last post I had the bodice mostly finished, it was just missing the collar and sleeves. So those are the things i’ll be talking about today.

The gown in the film doesn’t have sleeves, but puff sleeves flatter my arms nicely and I think they work well with the dress design. The pre-transformation dress had puff sleeves, so who says the transformed ball gown shouldn’t?

I made the sleeves similar to the ones on 19th century ball gowns. Which means they are short, sheer, with boning in the cuff. I started by cutting two three yard lengths of tulle.

Then I gathered the sleeves at one end, about an inch away from the edge. This edge will be the cuff and this gathering creates a cute one inch ruffle. 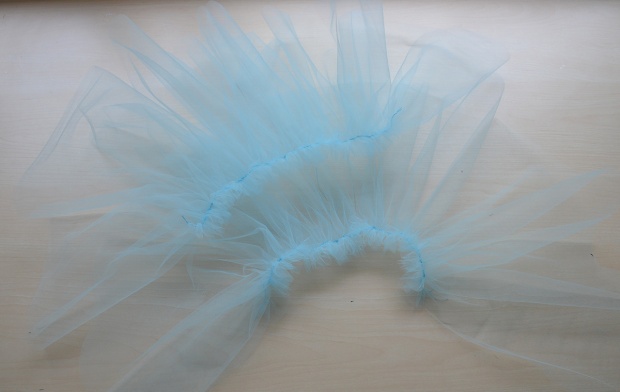 I pinned the tulle onto my sleeve pattern. 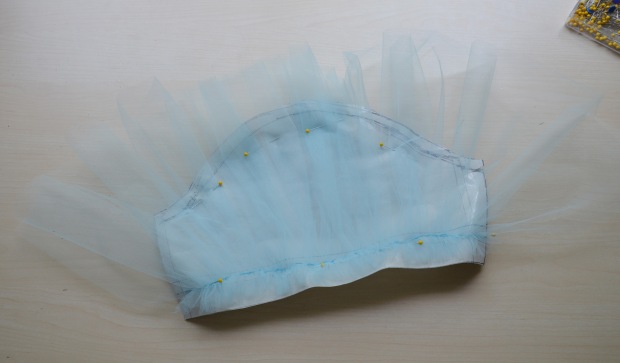 Then sewed around the top so they would hold that shape. I decided my sleeves were a bit long so I sewed one inch away from that line. I also sewed ribbon across the gathering at the cuff. This ribbon was supposed to be a boning channel but the boning kept getting caught on the tulle. If I forced it, it would tear.

So I sewed tiny strips of lamé overtop the ribbon, then inserted the boning into that, which totally worked! I also trimmed the sleeves down to the line I sewed across the top.

I pinned the sides to make sure they fit (they did) then sewed them up.

Those got sewn onto the bodice with a whip stitch.

I made the collar from two rectangles of lamé and two of tulle. I think these were about ten inches wide and twenty something inches long. The tulle was cut to be fifteen inches longer since I had planned on tying the ends into a bow at the front.

I pinned the right sides together and sewed the rectangles into tubes. This is what they looked like when turned the right way out.

I gathered one end of each tube down to about an inch. This will be the center point of the collar and attach to the center front of the bodice neckline.

It was at this point that I started pinning the collar on. I tried the bodice on with the collar and hated it. The proportions were really off and it didn’t look the way I wanted at all. I decided the only way to fix it was by lowering the neckline. So I used a sharpie to draw a “V” in the center and chopped off three inches. The edges got finished with ribbon so it won’t fray.

Then I pinned the collar on again. I was much happier with it this time!

I decided against the bow – it looked silly on the bodice. So I ended up cutting most of the tulle off and wrapping the few remaining inches around the gathered parts of the collar. This hid the stitching.

I finished the bodice off with little fabric flowers which I got from Joanns. I pinned three onto the cuff of each sleeve and three to the center point of the collar. 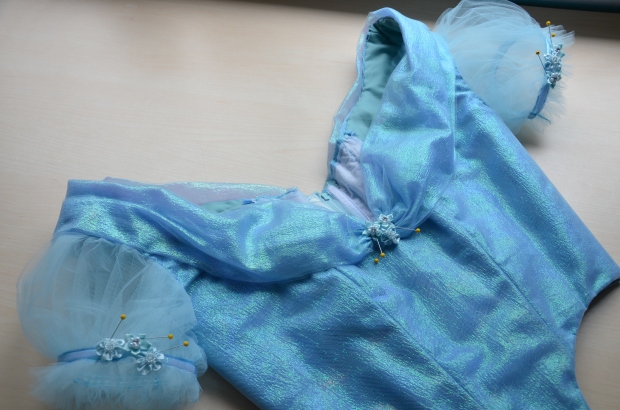 With those sewn on it was finished! 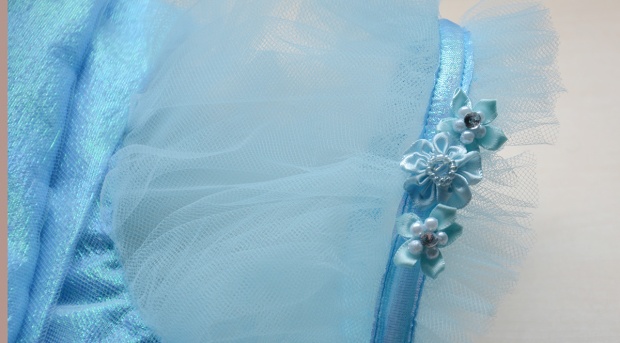 I paired the costume with a home made headband. I sewed iridescent beads and more ribbon flowers to a dyed strip of organza. This adds a little sparkle to the wig without destroying it with E6000 and rhinestones.

Here is a closeup of the bodice. I liked the webcam photos of this a lot more than the ones taken with my nice camera (the lighting makes them a bit weird looking) but i’ll post those below as well! 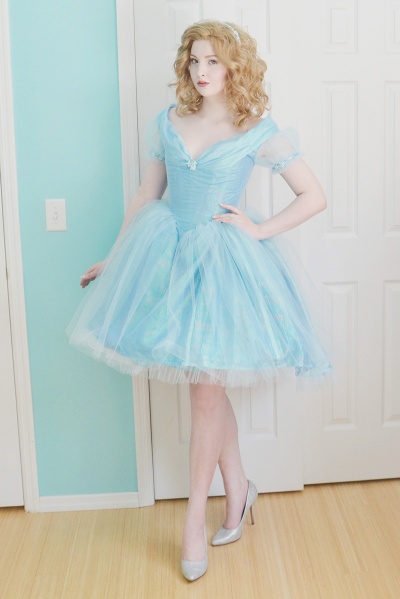 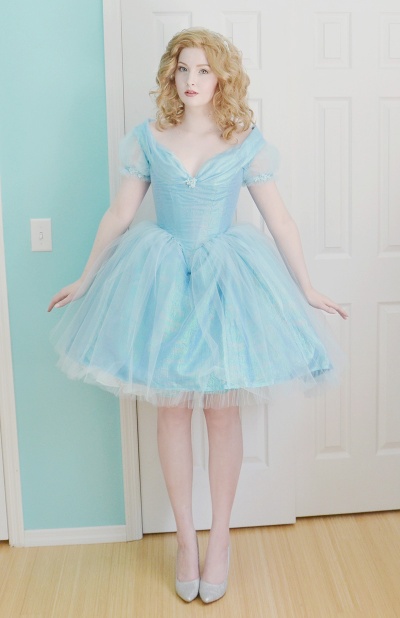 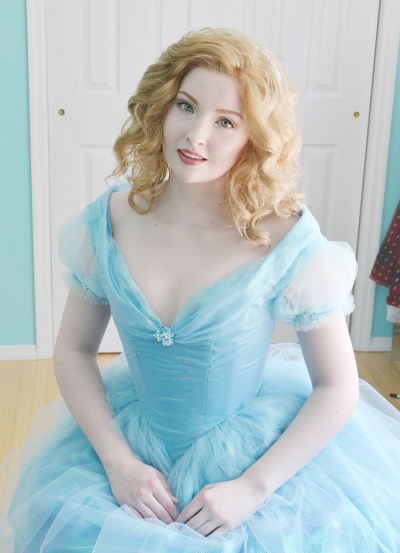 Considering all the struggles I had with the first half of this project, I’m pretty happy with the end result. I think the bodice especially ended up really cute. If I were to do it again I would add several more tulle overlays to the skirt. I would also use a different lining fabric for the bodice. One of my favorite things about the live action dress were the different textures in it (the skirt, collar, and bodice were all completely different). But my dress only has one texture – and even though it’s a pretty texture,  it’s all the same all over so it lacks visual interest.

I’d also set the eyelets properly the first time and make the bodice a little differently. If I had done that the first time I would have enjoyed this project way more!

Thank you for sticking with me – hopefully my next project will go a little better!