With Cinderella done I can go back to my twice weekly updates! I’ve spent the last month trying to get my youtube videos on a schedule, and coordinating blog posts with those. I think that’s caused me to neglect blogging a bit and i’ve ended up with really long posts once a week instead of shorter ones twice weekly. That has caused a huge backlog of blog posts about projects I haven’t been filming and it’s a bit of a mess!

But i’m going to try and get it sorted out. And i’m starting with a project I began more than six months ago.

In November I made a Beaded Doublet from a variety of brown materials, lace, and pearls. I was quite happy with the finished doublet, but lacked the motivation to make the rest of the ensemble at that time. I started work on the matching pants in January and finished them in April. The tunic was finished a month later, and the hat was made two weeks ago (about an hour before I decided I wanted to photograph the costume that same day).

So after eight months of work I finally have my menswear ensemble! And now I want to make another one. Maybe if I start now it’ll be done before 2016?

Today i’ll talk about the pants or breeches, if you want a more historically correct term. Much like the doublet, this costume is really lacking in the accuracy department. It’s based off of paintings that I liked and has elements from a slew of different centuries. Going along with that theme I didn’t research or make these the historical way at all.

I started with a home made pattern. I can’t remember how I got to this point (it was a while ago). I think I used a pattern I drafted last year as a base for the crotch slopes, then altered the length and amount of fabric in the hips. I’m pretty sure I made a mock up first and ended up removing a lot of material from the hips.

This is what the lining layer looked like once it was cut out and pinned to the brown polyester taffeta, which will be the front layer of the pants. 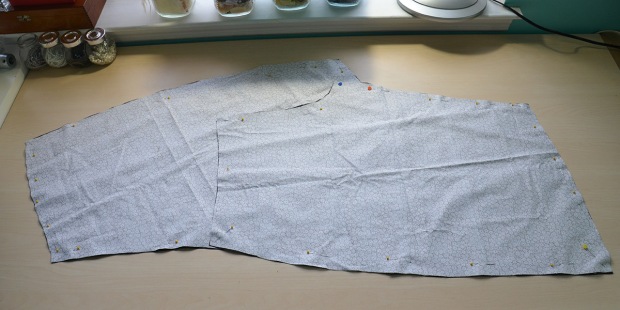 I cut the lining and front panels out together to make sure everything was the same size, but they were assembled separately. The taffeta layer was done first. I marked the darts out with chalk, then sewed them.

I’m pretty sure mens pants didn’t have darts in the 1600s, but men probably weren’t working with a twelve inch hip/waist difference either. 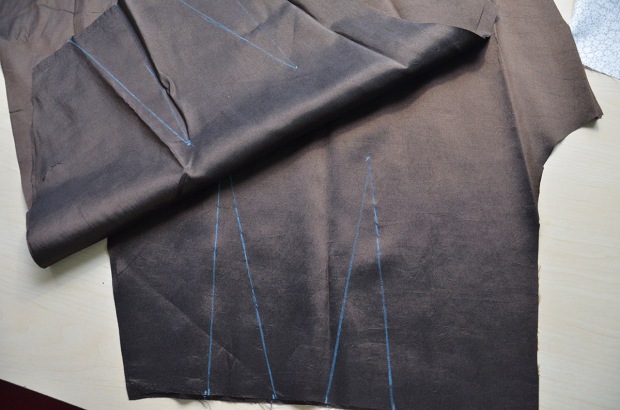 Here are the darts sewn and ironed. At this point I realized that I got a good batch of polyester taffeta. Some poly taffetas are like tarp material and will not take on any shape without becoming a puckered mess. This stuff was really thin and pressed very nicely, which was great! Especially since I only paid $8 for the two yards.

Here you can see the taffeta layer and the cotton side by side.

I left the front seven inches of the crotch open. Instead of sewing that part closed I turned the edges over by a half inch and covered the raw edge with a two inch wide strip of fusible interfacing. Eventually I’ll add eyelets to each side of the opening, which will be used to close the pants once they are worn. The interfacing will prevent the fabric from warping as badly and make the eyelets more durable.

I attached them with the wrong sides facing each other so the frayed side seams are hidden. I did that by machine sewing them together at the waist and cuffs. At the front opening I whip stitched them together by hand.

I sort of cartridge pleated the cuffs. I use that term loosely because it was really just two rows of large basting stitches that I pulled on until the cuffs were the correct width. I did use a strip of flannel to bulk up the taffeta and make the “pleats” look a little nicer.

At this point they started to look like pants! And I could try them on!

Not a flattering angle for me and taken shortly after Christmas snacking, but the fit was good! A little volume in the sides, no wonky crotch, no saggy butt. Not perfect but compared my previous pant making experiences I was happy. 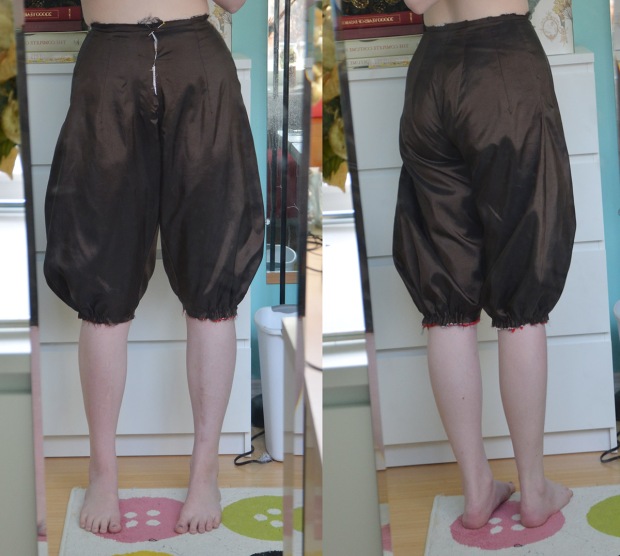 I sewed eyelets into the front panels. Looking back I realize these should have been much closer together. They are a whole inch and three quarters apart, what was I thinking?!

But other than that they are fine.

I cut out a waistband from the jacquard I used for part of the doublet. This is a simple two inch wide strip with interfacing on the back to make it a little sturdier.

I turned the edges over and whip stitched it onto the pants. Then I added two eyelets to either side so it could lace up as well. I did this step a few weeks after the worn picture above and by this point they were a little big in the waist! So I gathered the center back down just the tiniest bit before attaching the waistband.

When it was finished I cut a strip of cotton and pinned it over the raw edges, this will serve as lining.

I repeated this same process – though on a smaller scale – on the cuffs. They got the same jacquard band and cotton lining treatment.

And I had a completed pair of pants! I probably could have made these in a day or two if I had really tried, but the timeline doesn’t matter, what matters is that I did finish them and they actually fit.

I don’t have any pictures of the way the crotch and waistband looked (it’s all hidden by the doublet) but here is a side shot. 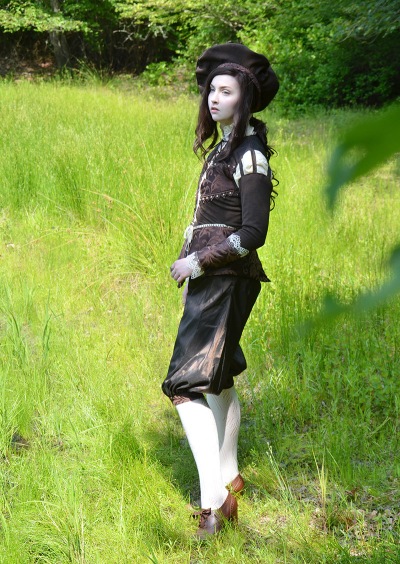 And the back. Okay the fit in the back isn’t great. The gathers at the waistband make it look wedgie-ish than they are. They were actually pretty comfortable to wear on the mile long trek we took in the woods to get these pictures.

More photos soon along with the post about the hat and tunic. I didn’t do a very good job documenting the process of either of those things, but I’ll try to cobble together post about them.