I recently went to ikea. Going to ikea is usually a fun experience, because I enjoy places with a lot of stuff I don’t need but find very appealing because it is cheap and aesthetically pleasing. I got a new rug for my sewing room, and a little wire cart for under my desk. But the most exciting purchase were the curtains I got.

I don’t need curtains. I don’t plan on using any of the sets as curtains. The reason I bought them is because the curtains are effectively very large panels of fabric. About five and a half yards of fabric, in fact, which is enough to make a dress! That’s what i’ll be doing today. This entire dress is made from a pair of curtains and a zipper, which cost a grand total of $16. And it only took me five hours to make! 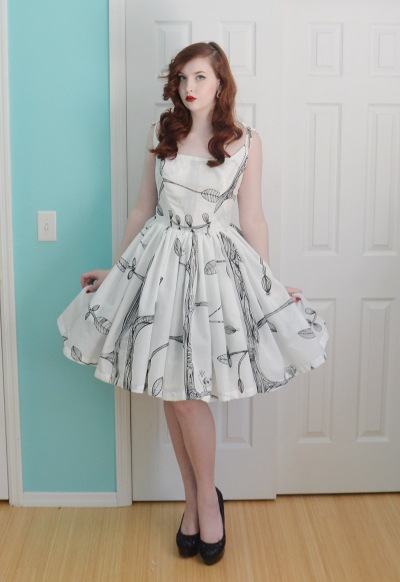 I sort of gave up on photographing this project part way through. I made this dress for my youtube channel, and wasn’t even sure if I would blog about it, which is why the pictures are limited. But there should be enough for you to understand the process!

Here is the material. These are EIVOR curtains.

It’s a stiff cotton fabric and it feels a lot like the broadcloth you get at fabric stores. This isn’t a print I would usually go for, but I thought it was really cute. It’s a large sketchy black pattern of branches, leaves, and birds.

As I said, this isn’t a print I would usually go for, so I wasn’t entirely sure what to make with it. I decided to browse etsy for ideas. I ended up searching for 1950s summer dresses, since they often have cute, but simple designs, which suit a large print. I found two that I really liked, they can be seen here and here.

Here is one of the images from the listing (photo belongs MinxouriVintage, not me) in case it gets removed and isn’t visible later on. I thought this neckline was pretty, and the bows on the straps won me over completely.

So I used some scraps of a batik fabric and draped a pattern on my dress form which I felt looked similar. I know it looks pretty shoddy here, but I ironed it, cleaned up the edges, and transferred it onto paper.

After all that it looked like this! Much nicer!

I cut the bodice out twice. One layer will be the front, the other will be the lining. Since this fabric isn’t completely opaque the print on the lining layer is visible from the outside. I could have used a pure white cotton lining instead, but I liked being able to see the print. It ads a shadowy effect which I think is cool.

I marked the darts onto the wrong side of the fabric. Then they got pinned and sewed in place.

Then I made bias tape from one and a half inch wide strips of bias cut fabric. I folded the edges inward and pinned them over the arm holes. I made the bias tape sixteen or so inches longer than the arm hole. Eight inches hang off of either side and will serve as straps.

I sewed the bias tape on and that was pretty much it for the bodice! The straps got tied into bows and it was done. 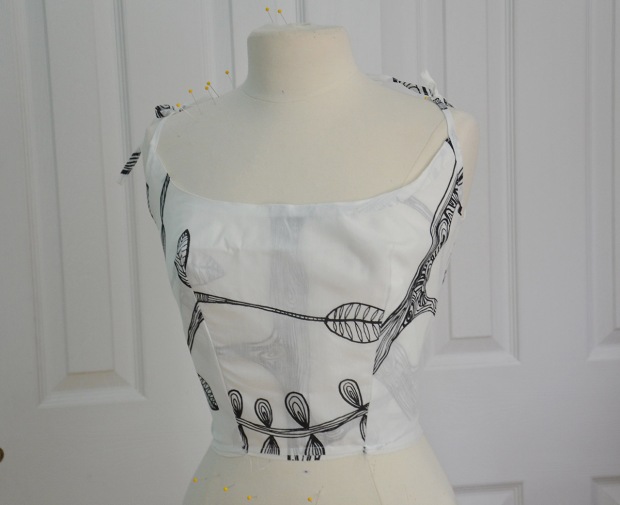 The skirt is three twenty three inch long panels, which are the full width of the curtains (fifty seven inches).

I sewed them together, then hemmed the bottom edge. I did this by machine for once, hoping to save time. The edge was turned over by a half inch, then by one inch, to get a clean finish.

The top was gathered down by machine as well. I pushed the fabric under the foot as I went and ran it through the machine several times to get it down to the twenty eight inches it needed to be. 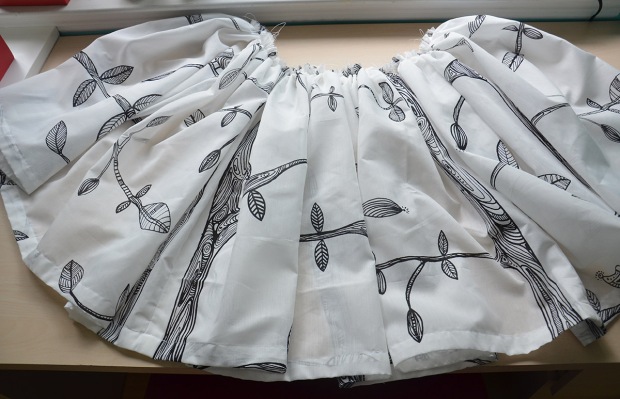 The skirt was pinned to the bodice and I sewed the waist seam. I also covered the raw edge with bias tape.

The final step was adding a zipper and sewing up the back seam. Then it was done! 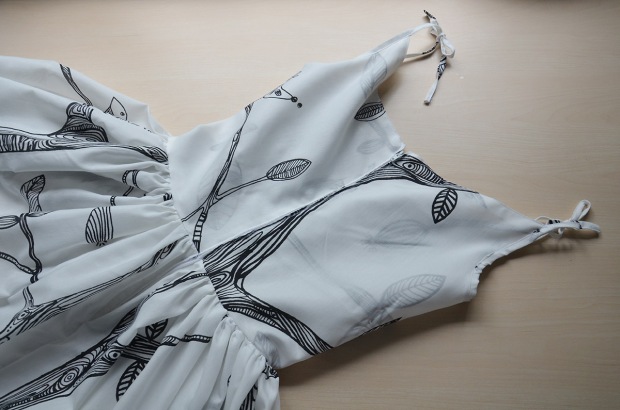 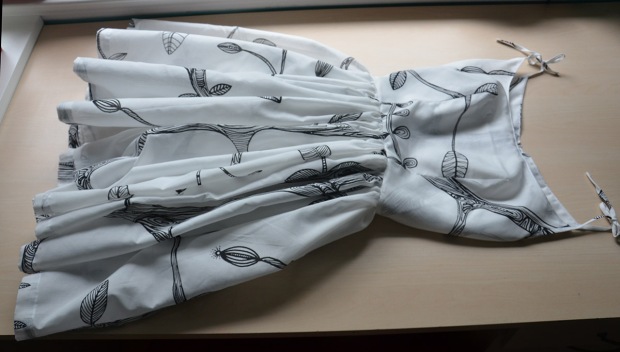 And here it is worn. It looks cute without a petticoat, but for these pictures I wore a cheap leg avenue petti – I got mine on ebay but i’m pretty sure that is the same one.

I like this dress a lot, especially considering it only took $16 and five hours to make! 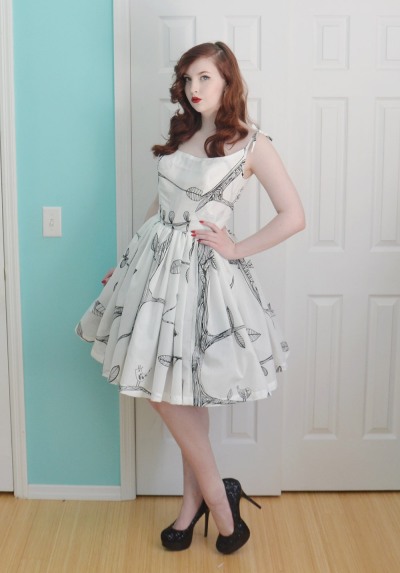 18 thoughts on “Making a Dress out of Ikea Curtains”