Today i’m blogging about making the skirt to match the black lace bodice which I posted about last week. This part of the project went better than the bodice, and ended up being pretty easy!

The pattern is a simple 18.5″ long three quarter circle skirt. The finished length after seams will be seventeen inches, which is pretty short, but there will be a six inch ruffle sewn onto the hem so hopefully it will rest just above my knees. 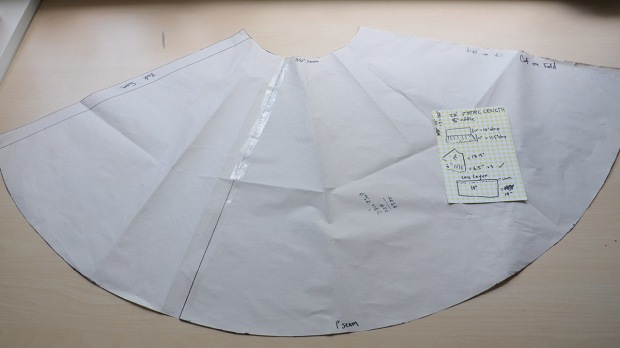 The skirt was cut out of the polyester shantung I used for the bodice. I had just barely enough left!

I sewed a layer of black petticoat net overtop so it would match the bodice. The bodice actually had two layers of petticoat net on it, but I figured the gathered black lace at the waistline of the skirt would make it look darker and balance out the color difference.

Also I didn’t have a lot of petticoat net leftover. The second layer would have been made up of three or four pieces which I didn’t think would look that good. 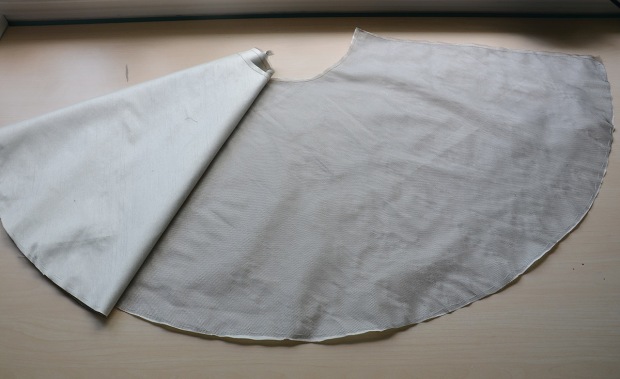 I was going to do a normal rolled hem on this but I ended up having just enough one inch wide horsehair left. So I used that instead. I sewed the horsehair on by machine, then turned the hem over and sewed it down by hand with whip stitches.

With the circle skirt done I switched over to working on the petticoat topper and ruffle. The petticoat i’m wearing under this is  my cheap leg avenue one, since I plan on traveling with this dress and that one can be squished into a small plastic bag. But that petticoat is shorter than this skirt and doesn’t have the level of volume I wanted.

Which is where the petticoat topper comes in! It adds the length I want and a bit more poof. And it gets sewn into the dress so the dress could even be worn without a petticoat and still have a bit of volume.

I cut twelve and eleven inch wide strips for the petticoat topper, and six and a half inch wide strips for the ruffle on the hem of the circle skirt. All of these were cut from a beige point d’esprit netting I got from Joanns. I was pretty impressed with this netting – I think I paid less than $3 a yard for it and it was really soft and easy to work with, while still creating a good amount of volume.

And then the top was gathered down and tah-dah! It doesn’t look like much here but trust me, it helps with the skirt shape.

Then the six inch wide strips were sewn together and the twelve yard length was gathered down.

That is some ruffly goodness right there. I left all of these strips unhemmed because I prefer the look of that. This netting is soft enough that it isn’t scratchy, and it doesn’t fray, so it doesn’t really need to be hemmed anyway.

The ruffle got pinned on.

And topstitched on. I could have sewn it on by hand but I didn’t think anyone would really notice.

Here it is on the dress form – It looks a little uneven but I promise it isn’t!

With that done I cut out the lace overlay. This was nineteen inches long and three yards wide. I figured after the top was gathered down it would fall just below the hem of the circle skirt and make a nice transition into the netting.

I did that, and it kind of worked but I didn’t like the result. 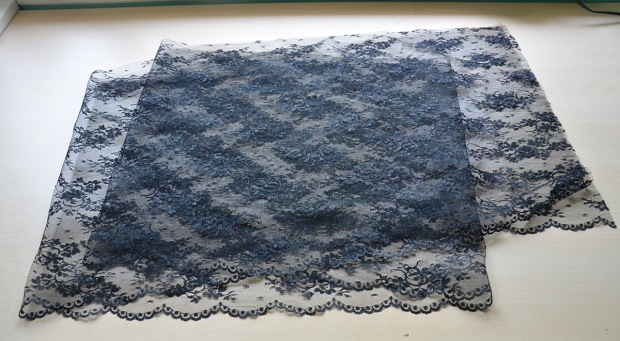 So I ripped the gathers out and pinned the scalloped edge of the lace onto the point where the netting attaches to the circle skirt. Then I roughly pinned the top to the waistline.  I realize this looks messy right now, but I liked this soo much better!

I sewed the lace onto the hem.

Then gathered the top down and sewed it onto the waistline of the circle skirt.

I thought it looked really lovely, but there was a slight problem. 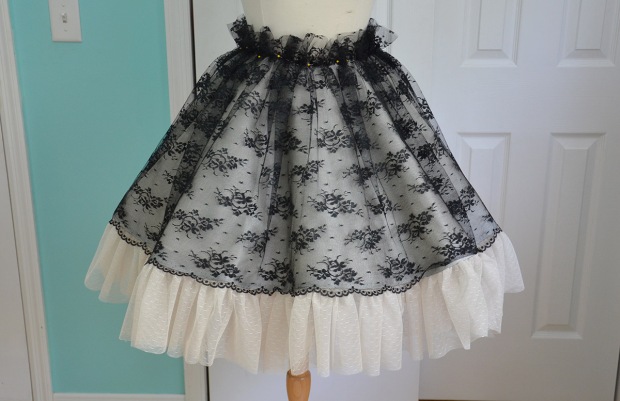 The scalloped edge kept flipping up and that looked bad.

So I spent an hour hand sewing the scalloped edge onto the netting. 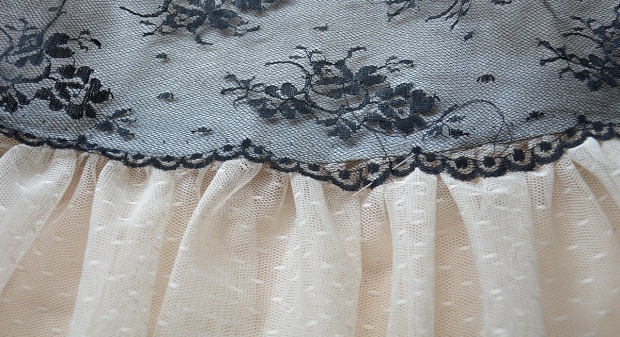 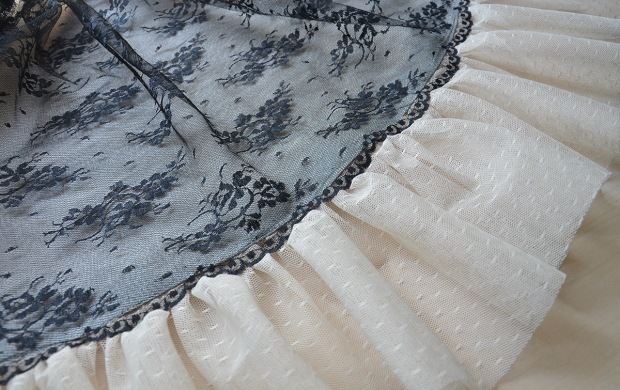 And then it was done! Or almost done. I still have to glue on the rhinestones but everything else is finished. I love how this turned out. I think the fabrics look lovely together and it’s so pretty and delicate. I was worried the lace would look cheap (I think I paid like $6 a yard for it? so it was cheap) and that my dress would end up looking cheap. But that concern went away after getting it to this point.

And that’s it! Part three should be up on Friday and will talk about the collar.