A couple weeks ago I posted about the plaid skirt I have in progress. That skirt is part of an ensemble which will also include a blouse, jacket, and hat. The skirt design came really easily to me but figuring out the upper half proved to be more of a challenge!

I had a very rough idea of what I wanted this jacket to look like but couldn’t seem to find anything that matched my “vision”. The traditional eton jackets were a bit simpler than what I wanted and everything else seemed too big and poofy.

I ended up purchasing the book “Victorian Fashions and Costumes from Harper’s Bazar, 1867-1898″ which was a big help. I didn’t see anything in it that I wanted to replicate but it gave me a better idea of the silhouettes and closures used on jackets from the 1890s, which made me feel more comfortable in making up a design of my own.

Here is a rough sketch of what I had in mind.

Then it was time to make the pattern. I had planned on flat drafting this but after reading about the process I felt too intimidated and chose to drape it instead. Even though I didn’t flat draft it,  I used the patterns in “The Keystone Jacket and Dress Cutter” as a guide for the shapes of the pieces, which was helpful.

Once copied to paper my pattern looked like this!

I used that pattern to make a mock up which looked like this! I wasn’t expecting it to look anywhere near this good on the first try, so this was a very pleasant surprise.

There were a a bunch of changes that had to be made – like lowering the hem and waistline by a half inch, taking the front dart in by a 1/4″ at the waist, and adding a half inch to the arm openings. But all of those are pretty simple to do.

I also decided to add an inch to the front of each panel so the jacket could close with buttons. That wasn’t part of my original plan (or sketch) but I thought it would look more flattering in the end.

Once the pattern was altered I drew diagonal lines onto each piece. These lines are a guide for which direction the plaid should face, and line up with certain points on the plaid material.

Each pattern piece is pinned onto the material, with the guidelines carefully matched to points on the plaid.

Once one piece is cut out it’s used as a guide for cutting out the next piece so I can guarantee everything is symmetrical.

By some miracle I managed to cut out seven of the nine jacket pieces from the weirdly shapes scraps I had leftover after cutting out the skirt. This was fantastic news since I only had a yard and a half of material leftover aside from the scraps, and I needed ALL of that yardage to cut out the sleeves and front panels of the jacket.

Speaking of the front panels, these had me stumped. I drew the guidelines onto the pattern, just like I did with all the other pieces. But after doing that I realized a major problem. 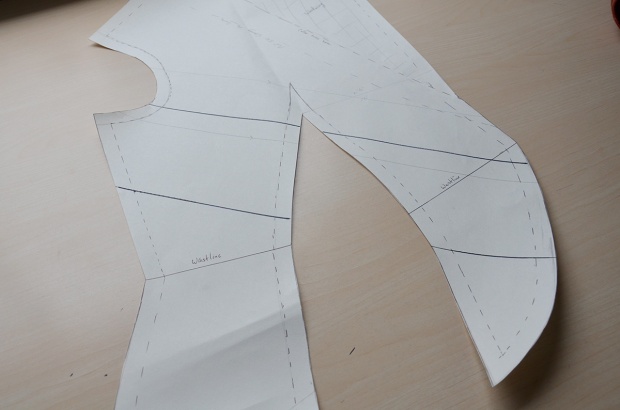 Once the dart is sewn the plaid would not match. Here you can see how far the guidelines are from lining up.

If this was at the back of the bodice I might be more lenient, but this is the front, it can’t be that far off!

So I chopped my pattern into two pieces, added seam allowances, and cut them out on separate grain lines. 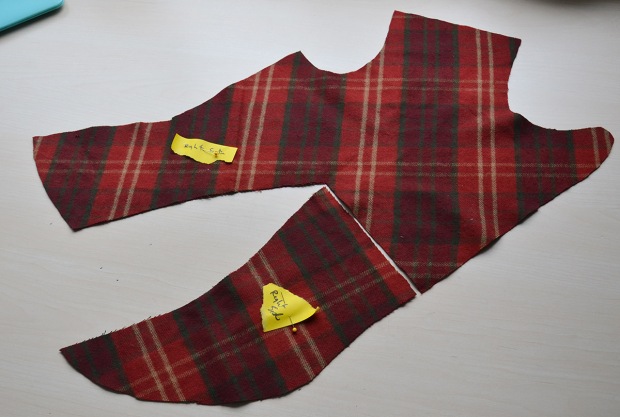 Then I sewed the pieces together – I realize it doesn’t look like much here, just wait!

Before sewing the dart I interfaced the lapels and collar. I’d planned on pad stitching this but I didn’t have the right materials around so interfacing seemed like the best option.

Now I could finally do the dart up and see if it worked, which it totally did!  I’m pretty sure I made an squealing noise when I ironed this and pinned it to my dress form. I knew it should work, but I was not expecting it to look this good and match up this nicely.

It isn’t perfect but it’s way closer than I had expected it to be! 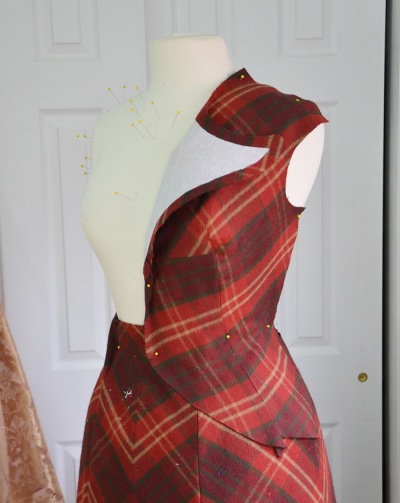 With the front panels done I moved on to assembling the rest of the pieces. Each piece was basted together by hand, then sewn.

The basting stitches are more secure than pins, so the fabric doesn’t move when I sew it and I can make sure everything lines up just the way I want it to!

Once the back panels were assembled I decided to try something new. It’s a technique called Soutache, which involves creating patterns out of braided cord. I bought sixteen yards of green soutache braid back in December, which I planned on pairing with this fabric before I even had a design in mind.

I was mostly inspired by this jacket, though I used some references from the Victorian fashion book as well. I spent hours trying to figure out the name of this type of design since I hoped to copy an existing pattern but I couldn’t find anything similar so I had to draw it out myself. 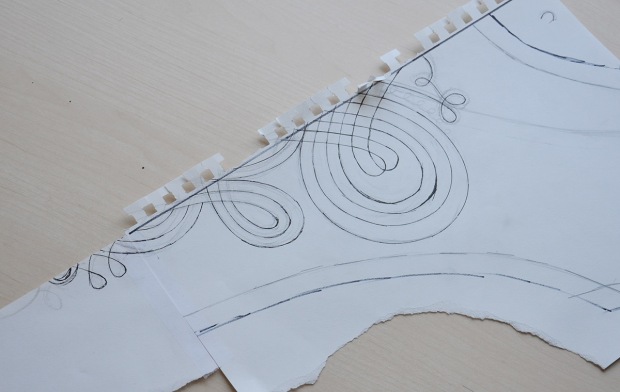 Then I loaded it into photoshop and mirrored the image. I also made the top loops a little bit bigger and stretched the image to make it longer. After printing it out I used white out and a sharpie to rearrange a few things I wasn’t happy with.

Then I traced the design onto interfacing, which got fused onto the back of the jacket panels. 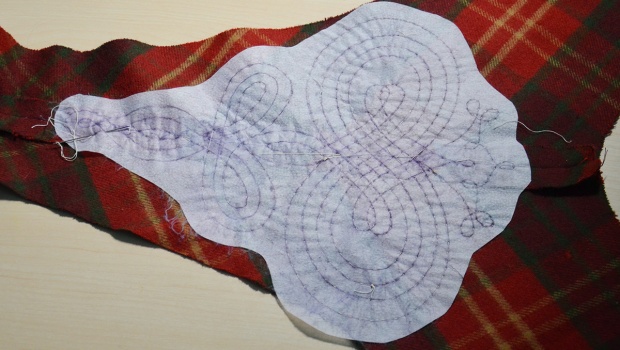 Then I sewed through the design with pale thread so the design was visible on the front of the fabric.

And lastly I sewed the braid on. It is SO far from being symmetrical, which bothers me, but aside from that i’m pretty happy with how it looks. I was worried it would look too busy, or barely be visible on the plaid, but neither of those things were an issue in the end.

Also I’m pretty sure the goal of these designs is to have them be made from one continuous piece of braid, which definitely isn’t the case for the design I came up with. So that’s something to keep in mind for the future. 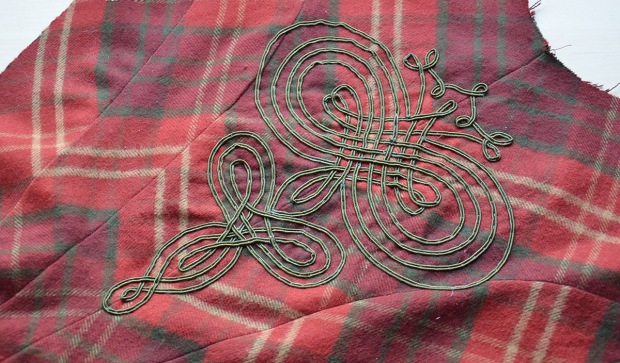 Despite the lack of symmetry, I really do like how it looks when the jacket is worn or on my dress form. 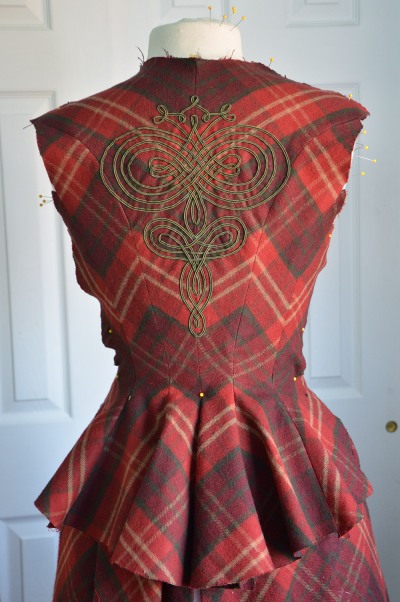 When the back detailing was done I sewed the shoulder seem of the jacket, then cut out the  facing/lapels from silk. This is the same material I used for the pleated portions of the skirt panels and was also used to make the hat.

The lapels were stiffened with fusible interfacing, then I sewed them into the jacket with the right sides facing each other, trimmed the corners, then turned things the right way out and pinned around the edges.

I used small whip stitches to secure the layers of fabric together, then ironed the lapel so it was smooth. 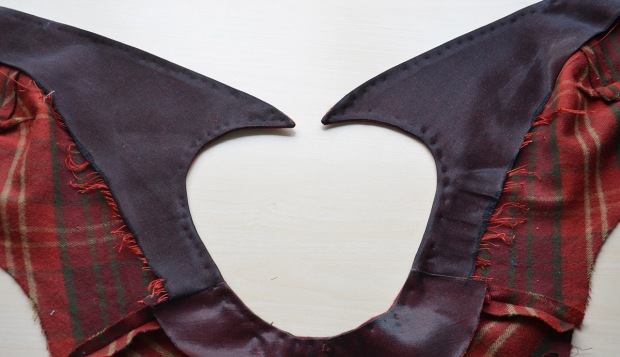 I didn’t figure out a soutache design for the lapels until after they were sewn to the jacket. And at this point I couldn’t use interfacing on the underside of the fabric to transfer the design. So I traced the design onto the tissue paper that comes with interfacing. 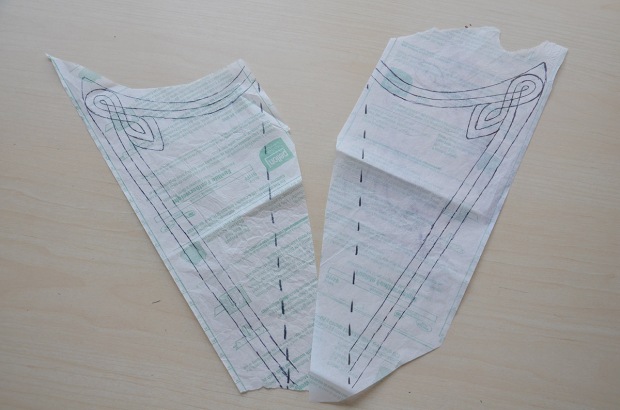 Then pinned that onto the lapels and sewed through it. Once I was done I very carefully ripped the tissue paper away, making sure that I didn’t tear out my stitches.

Here is the jacket after the braid was sewn on. I changed the design up a bit, but it is still very similar to the pattern shown above. I really like the way the green braid pops against the silk, and how it nicely ties in with the detailing on the back of the jacket.

That is it for this post, but I should have another one up soon showing the finished jacket!