This week i’m talking about making another shirt. I actually finished this one before my 1860’s blouse, which means it’s the first structured shirt i’ve ever finished! I think I made a few jersey shirts when I was cosplaying, and i’ve made partial shirts/corset covers recently, and tons of chemises, but never a proper structured shirt. Then last week I made two! Which is a big accomplishment for me.

This shirt is a proper shirtwaist.  I based it mostly off of this example, but I searched for shirtwaist advertisements before  starting just to get a better idea of the silhouette. This shirtwaist is going to be part of my 1890’s cycling ensemble, but the shape and sleeve design is a lot closer to what would have been worn in the early 1900s since I find them a lot more visually appealing.

And before getting started I wanted to mention that I also filmed the process of making this shirtwaist. So if you’d like to see me sewing it and describing the process in a bit more detail then you can watch the video here!

For this project i’m using two and a half yards of striped cotton shirting, and vintage shell buttons I picked up on etsy. 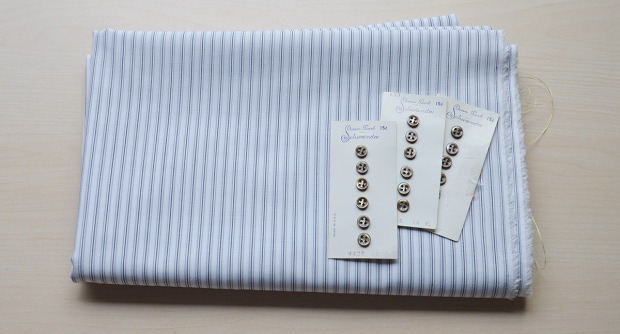 I started by draping the pattern. This would have been really easy to flat draft  but I was feeling lazy.

Once taken off the dress form I had something that looked like this. It’s rough around the edges but surprisingly it looks a lot like the shirtwaist patterns I found online. One is posted here, and another with more photos is here.

I’d planned on linking to a few paper patterns for shirtwaists but weirdly I couldn’t find any, which i’m assuming is because they are so easy to self draft. The closest things I could find are linked above, but I know the The “Keystone” Jacket and Dress Cutter

* has drafting instructions for a couple styles (along with sleeves and collars). 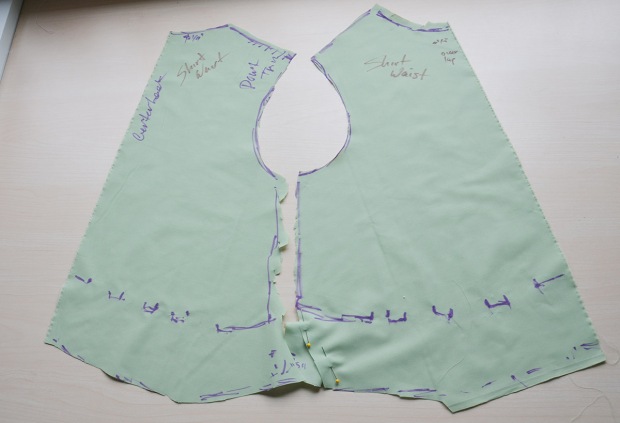 I smoothed out the edges and added seam allowances. Then I made a sleeve and cuff pattern. I chose to make the sleeves one piece with a dart from the elbow to cuff, which probably isn’t historically accurate, but when it’s worn you can’t even tell.

I cut the sleeves out. 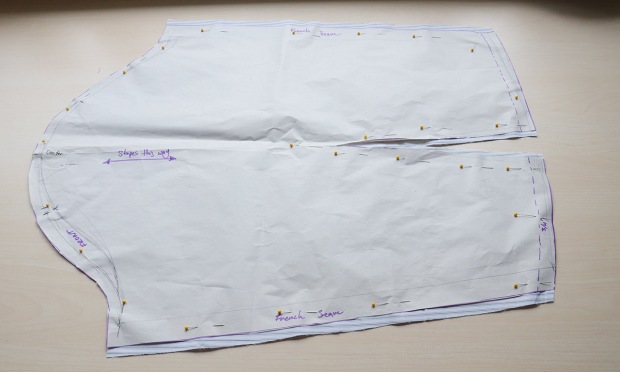 Then added the dart. This was sewn with a french seam so raw edges weren’t visible on the interior.

I turned the edges of the cuff inward, then fused interfacing overtop to give them a bit more structure.

Then the lower edge of the shirt was gathered down and pinned to the cuff. 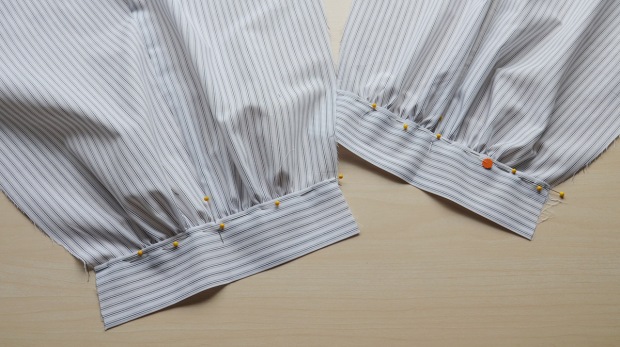 I sewed the cuffs on with slip stitches.

Then turned the lower eight inches of the seam allowance inward by a quarter inch. Then inward once again to hide the raw edge. I sewed this down by hand with whip stitches.

Then I sewed lining into the cuffs and snaps to keep them closed. I used snaps for all the closures on this project, since the buttons I picked are really tiny and there was no way I could make buttonholes that small without them looking awful. The snaps definitely aren’t historically accurate, but they do make it easy to get the shirt on which I appreciate!

The final touch were three shell buttons on each cuff.

I gathered down the top edge of the sleeves and that was it, they are finished!

After cutting out the bodice panels I used red thread and basting stitches to mark the pleat points. Then I turned the front edge inward by a quarter inch. I covered that edge with a one inch wide strip of interfacing, then turned it inward once again.

Then the panels were pleated. I started at the center front and pleated towards the side seams. The thread marks made this really easy to do.

The process was repeated on the back seam. After doing this I sewed across the pleats by machine with two rows of stitching. Then the basting stitches were removed and the pleats were ironed.

Buttons and snaps were sewn onto the two front panels.

This took me ages since the snaps are so tiny.

The bodice panels were sewn together at the shoulder with french seams. Then I turned the neckline inward by a quarter inch, then inward once again. It was sewn down with whip stitches to keep it in place.

With that done I sewed on the final snap and button.

The sleeves were sewn on with a half inch seam allowance, then I covered the raw edge with lace binding. After that I did up the side seams with french seams – the side seams were sewn from the hemline to several inches above the cuff (to the point where the edge was turned inward, which leaves an opening to get my hand through).

I hemmed the shirt by machine and that was it!

Well…kind of. The shirt was wearable at this point, but I wanted mine to have a collar.

So I made one out of cotton sateen. It’s two layers of material that were sewn with the right sides facing each other. Then it was turned the right-way out and the bottom edge was finished with lace tape.

I sewed that onto the collar of the shirt and now it’s really done! I think it looks quite nice. I really like the  sleeve volume and the proportions of this. It’s a bit big in the waist (which could be fixed with the waist ties/belt that were usually worn with shirtwaists ) but that isn’t a big deal at all. I think it looks pretty good for being my first real shirt.

And it’s definitely the most comfortable piece of a historical costume i’ve ever made. The fabric is thin enough to hide the corset, but light enough that you can feel a breeze through it. I wore it for around three hours last weekend (along with a pair of flannel pants, full length socks, a corset, combination chemise set, wig, and wool hat) when it was 80+ degrees out with very high humidity and managed to stay pretty comfortable.  So I can definitely see why these were paired with sporting costumes!

However as much as I like it, it still didn’t seem quite finished. And that’s because it was missing a bow. I made the bow for this by folding a two inch wide ribbon into this shape. (Isn’t that a great description?) I basically fiddled around with the ribbon until it started to look like a bow. This is it from the front.

And the back. I ended up sewing the ends of the bow to the portion of the ribbon that is folded over.

Then I gathered the bow down at the points where stitching is visible.

Which turned it into this! I sewed a center overtop of it, then strung thinner ribbon through the center.

The ribbon that goes through the center of the bow ties at the back of the neck…which is honestly a pretty bad design. The ribbon is prone to slipping which makes the bow droop, which makes the collar loosen, which makes the neck look wider. It isn’t a huge deal, but once I got home and after wearing the costume and looked at photos of the ensemble I realized the problem right away .

Luckily that can be fixed by creating a tie that snaps or hooks closed.

Here it is with it’s pretty little bow~ It’s so perky looking I love it.

And here it is with the matching wool jacket! It’s all starting to come together and I love how it looks so far.

And that’s it! Sorry if descriptions and photos were a little vague this time around, since I filmed making it I didn’t tak as many photos as usual.