This week i’m writing about the final piece of my cycling ensemble – a costume that already consists of a jacket, shirtwaist, and bow tie. Wearing those things on their own would have been pretty scandalous which is why I decided to pair them with cycling bloomers!

My original inspiration for this costume was this ensemble, which features the most fantastic pair of bloomers i’ve ever seen. As soon as I saw them I knew I had to make something similar, and I think i’ve accomplished it!

Drafting these was surprisingly easy. I copied the inseam from a pair of modern shorts onto newsprint, then dropped the crotch by almost five inches. I made each piece very wide – almost thirty inches at the waistline, and bigger at the hem. Unfortunately I didn’t take a photo of my pattern, but it honestly looked like giant rectangles with a crotch seam. Nothing too exciting!

Since I was feeling daring I cut the pattern out without making a mock up – I figured it was so massive i’ve have enough material there to make alterations if they were required.

After cutting the pieces out I sewed across the crotch seams with basting stitches. I was very careful here since I wanted the plaid fabric to line up perfectly. Unfortunately I realized half way through doing this that the pieces weren’t cut out properly and that the plaid wouldn’t line up. I think it’s a small enough print that it doesn’t really matter but I was a bit peeved! 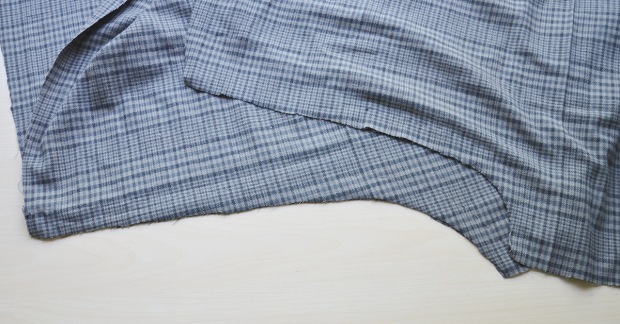 I sewed the crotch seams by machine with a one inch seam allowance. The top eight (ish) inches of the front seam were left open, since that’s where the closures will be. 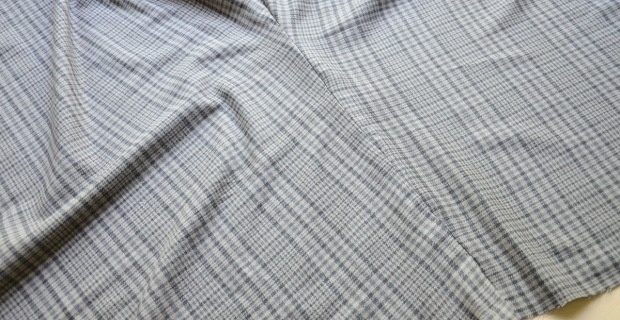 I ironed interfacing into the portion of the seam that was left open. This makes the fabric a bit sturdier and should make the front look smoother after the snaps are sewn in. One side of the seam allowance is ironed inward by an inch to create a finished edge. 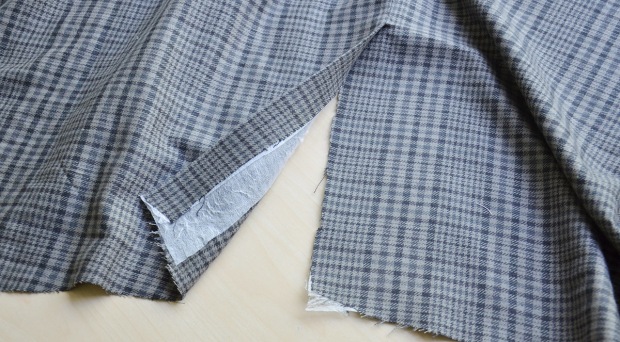 Then I realized I didn’t finish these seams. So I sewed lace tape to hide the raw edges, which was a pain to do at this stage! 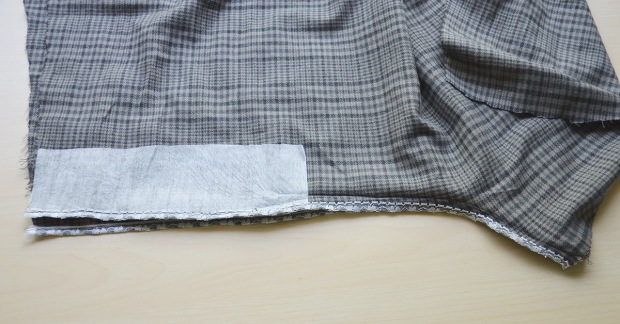 I sewed snaps into the front panel, placed a half inch away from each edge. I placed these pretty far apart (and used crappy snaps from the garment district) because there won’t be a lot of tension on them.

After sewing them on the edge that was ironed inward was whip stitched in place so it won’t flap about. 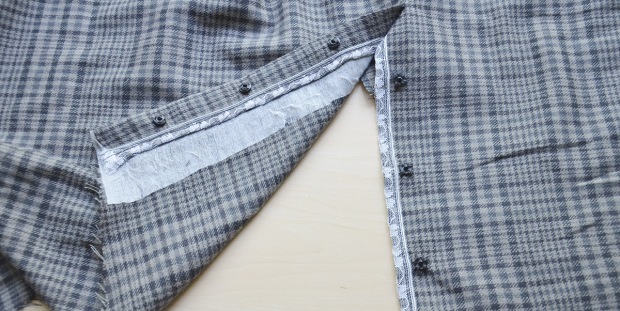 I did up the side seams, and inseam with french seams – here you can see how massive the are! They took almost four yards of flannel shirting to make. 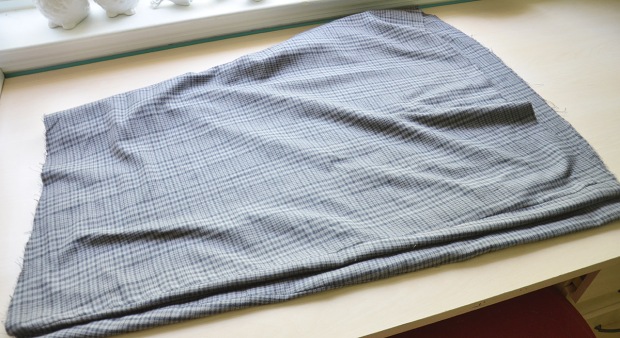 And it was time for pleats! I marked them onto the waistline.

And pinned them in place using the plaid design as a guide. The pleat pattern I did for this is kind of weird – the front and back are box pleats, with knife pleats that meet in an inverted box pleat at the sides. I didn’t intend on doing that, but it looked best when I started playing around with the fabric. 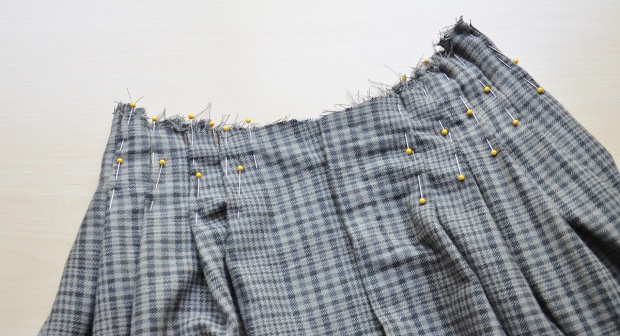 I sewed across the top edge to secure the pleats. And I intentionally chose not to iron the pleats since I didn’t want the fabric to have a structured feel to it. 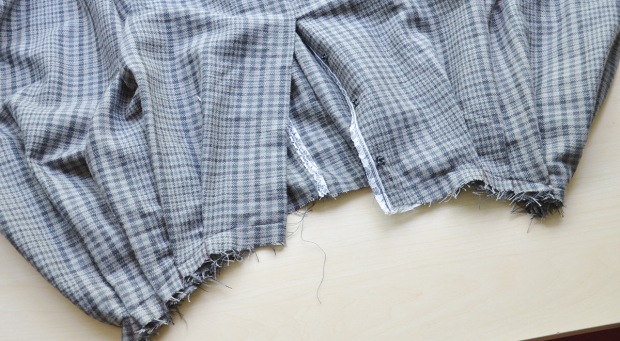 I tried the bloomers on at this point and realized they were really long, so I chopped two inches off the hem. Then I gathered the cuffs down so they were slightly larger than my calf measurement. 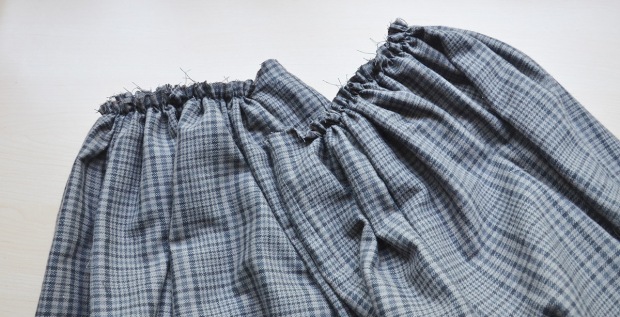 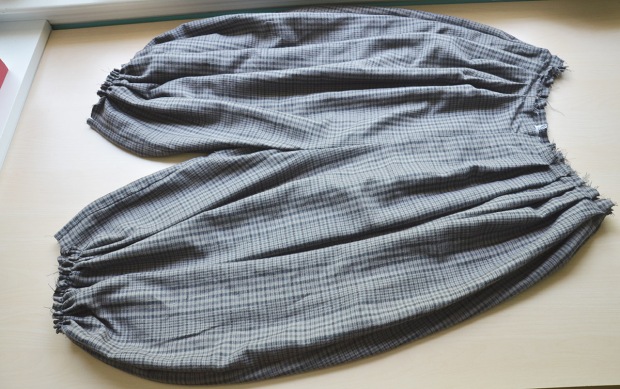 After a successful fitting I cut out the waistband and cuffs, which are just rectangles backed with fusible interfacing.

The cuffs were sewn with french seams. 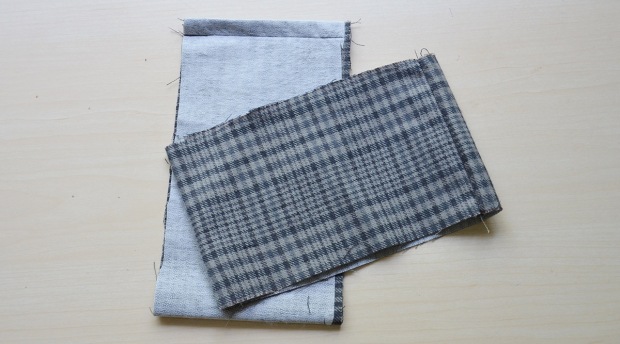 Then ironed in half so the raw edges touch, leaving a nice folded edge along the bottom. 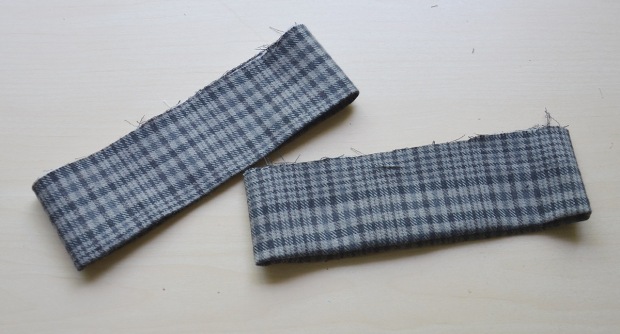 I sewed the cuffs on by machine with a half inch seam allowance – this isn’t my prettiest stitch work, but in my defense this fabric is really thick when it’s gathered!

I bound the raw edges with home made bias tape, then ironed them. 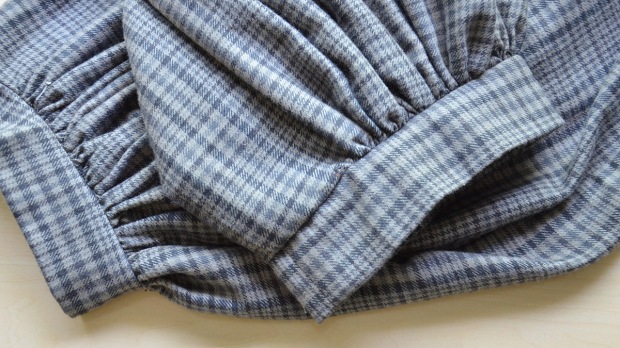 I folded the top edges of the waistband inward by an inch. Then I turned the two inches on one side inward by a little bit more. This makes it look nicer when they overlap.

I sewed across the bottom and side edges with running stitches, but left the bottom edge open since it will be secured when it’s sewn onto the shorts.

The waistband is pinned so two inches on one side extend beyond the center front.

It was sewn in place with whip stitches, then lined with cotton. 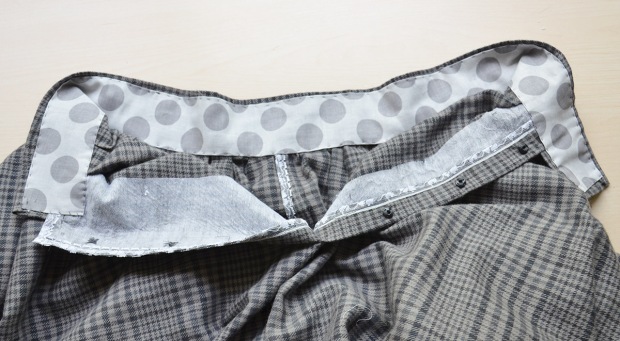 I sewed three hooks and bars into the waistband. The bars are an inch and a half away from the center front on one side, which creates the asymmetrical closure. 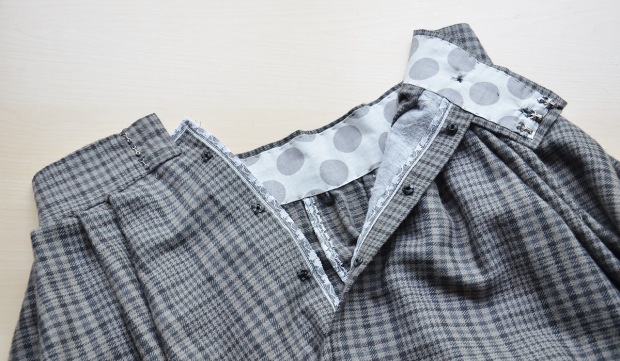 Two decorative buttons were added and that’s it! 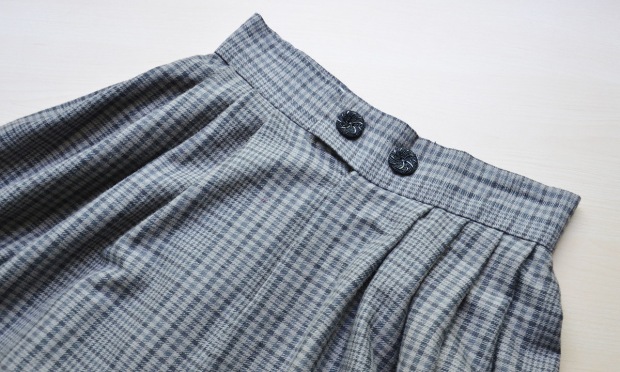 I’m so pleased with these. The closure is invisible when they are worn and i’m really happy with how the look on. They are really unflattering but have a very authentic looking silhouette. I was a bit concerned the crotch would be too high or low, and the volume would pool weirdly at the sides, but I think they are perfect!

And they took less than seven hours to make, which is crazy since I thought they would be the most difficult part of this costume.

I have photos of them worn but they haven’t been edited yet (though there is a bit of footage that shows me wearing them in the video about making them), so here is how they look flat. 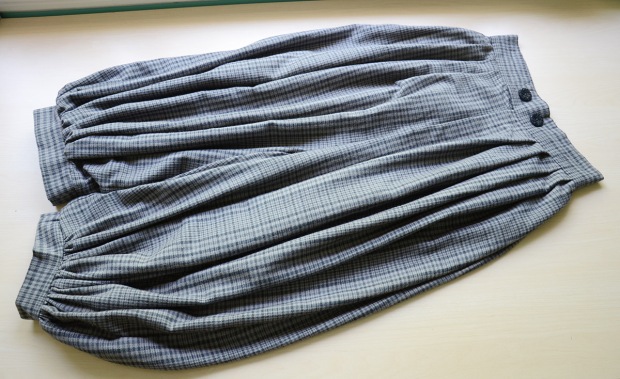 Now onto the hat. I started this ages ago, in March before I had the fabrics for this project. I was sick at the time and wanted a hand sewing project to work on in front of the TV and this seemed like a good candidate. Women’s Hats, Headdresses and Hairstyles*

mentioned sailor hats being popular during the 1890’s and I found a few examples of them being worn with cycling costumes, so I decided to make one!

Though everywhere says they are made from straw, I didn’t have access to straw. And even though I didn’t have fabrics for this project, I knew it would be based on the color scheme of this piece, and straw would clash with that.

So instead I used interfacing and buckram which is trimmed with wire. 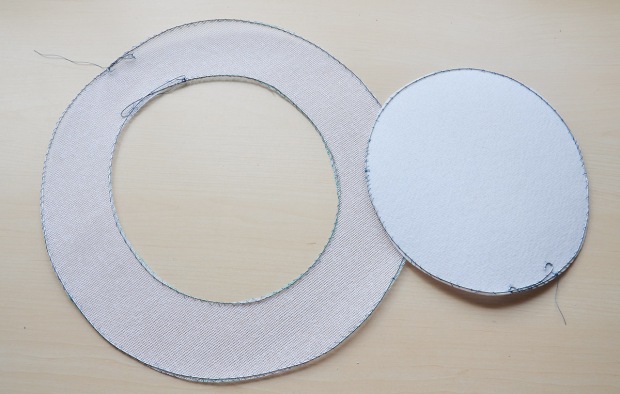 My pattern for this was really simple, I drafted it after taking large quantities of cold medication and it still turned out fine. 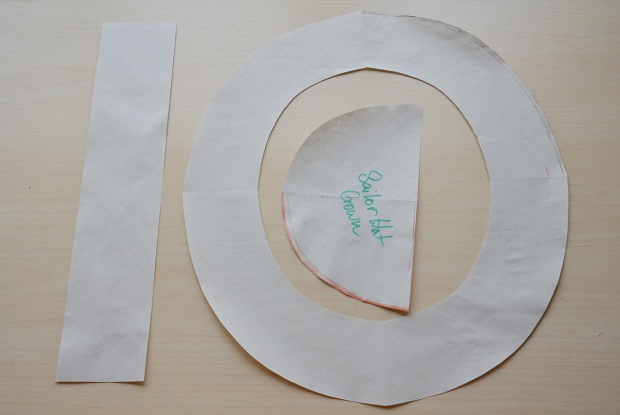 The pieces were then covered with wool. The brim is lined with a damask print denim and the top portions are lined with the same cotton I used to line the jacket. Unfortunately I didn’t take any photos of the process.

But here is the finished hat! The pieces were sewn together, then I trimmed it with some vintage ribbon and added a few paper flowers to the back. 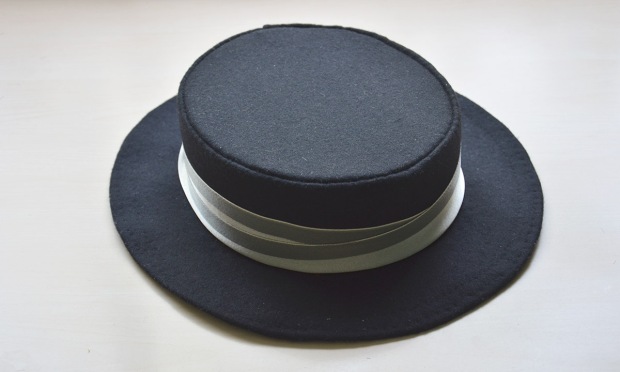 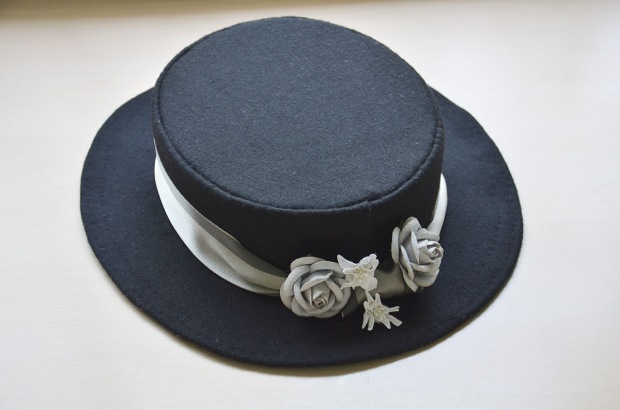 And that’s it! The costume is finished! Photos of it all together should be up soon. 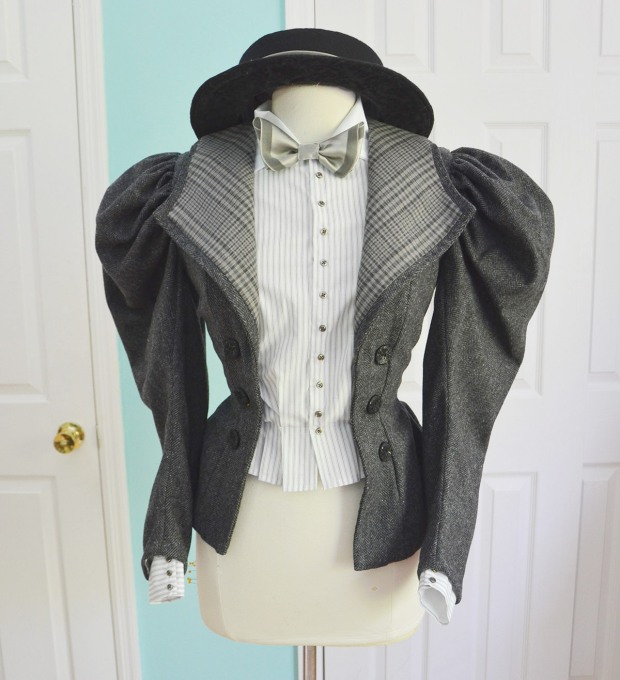 I changed the flower orientation on the hat and clipped the ribbon with pinking sheers at the back – I like it better this way! 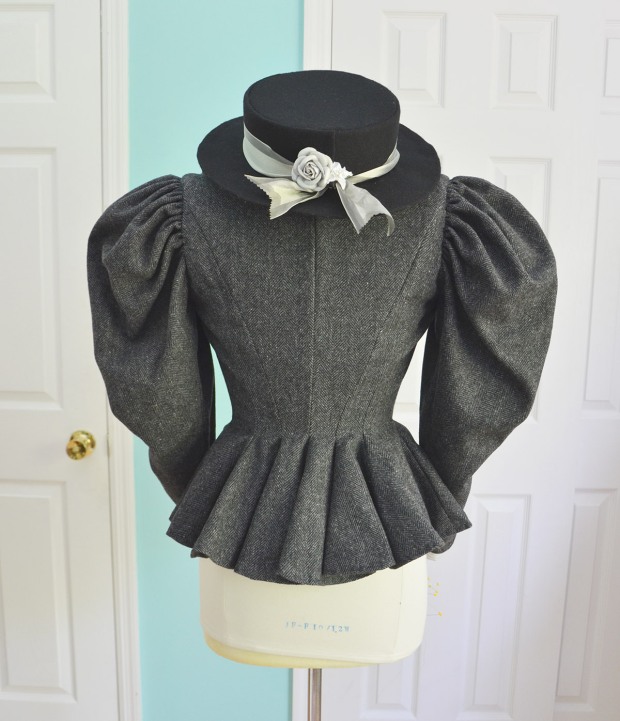