. I posted about my struggles with making the bodice here, and today i’m writing about making the sleeves, skirt, and matching hat. Luckily those parts gave me way less trouble than the bodice!

The sleeves were kind of confusing. As mentioned in my previous post the pattern for these was weird. The lining pattern was a completely different shape and size, with much smaller cuffs than the sleeve pattern. Yet there was no gathering marked on the sleeve pattern that indicated they could be sewn together.

So I decided to ditch the lining pattern.  I cut the sleeve pattern from the striped yellow fabric and sewed them together with half inch seams. I “finished” the interior edges with fray check since I forgot to add enough room to do french seams (oops). Then I finished the cuffs off with bias tape.

The top edges were also finished with bias tape, though I was a bit sloppier and attached this by machine since it won’t show.

I pinned the sleeves to the underarm of the bodice first.

Then I gathered the tops until the fit nicely in the sleeve cap.

The sleeves were sewn on with slip stitches, and later reinforced with running stitches that were sewn a quarter inch away from the edge.

Now it was time for the skirt! It was kind of unclear on the pattern whether the total width of the skirt was eighty inches, or if the back panels were eighty inches and the front panel/visible petticoat was an unmentioned width. I like full skirts so I chose to go with the latter…plus an extra twelve inches to make it more proportional to my height.

I cut two forty six inch wide panels, then sewed them together with a single french seam. I cut the hem on an angle so it’s a few inches longer at the back than at the front. And I also rounded off the corners.

The hem was turned inward by a half inch with basting stitches. 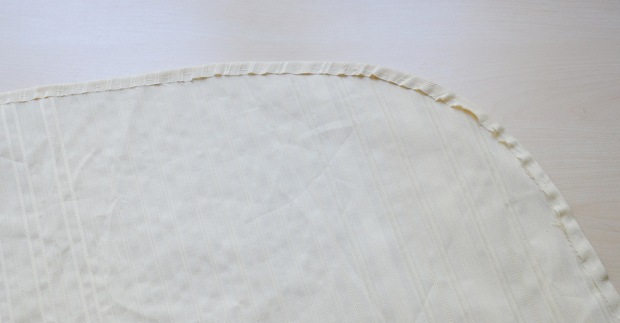 Then inward once again to hide the raw edges. This time I sewed it in place with whip stitches. 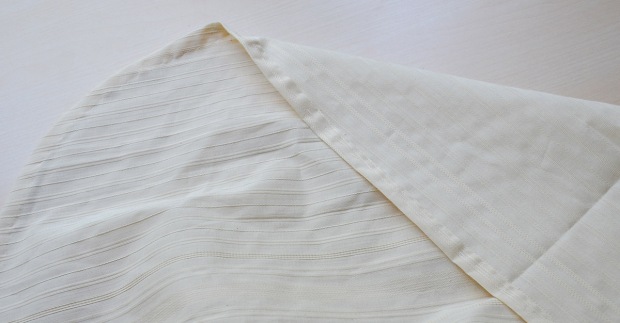 The back is pleated with double box pleats. I really like double box pleats, they nicely distribute fabric and aren’t as bulky as gathers or as finicky as normal pleats. Here was the “pleat sheet” that I followed.

And marked onto the top edge of my fabric.

Here it is pleated down. 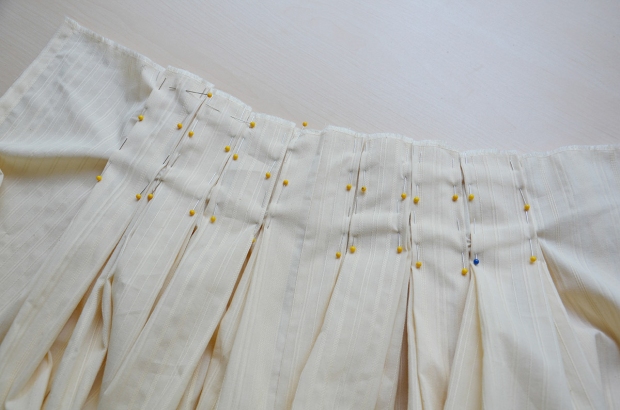 And laid out flat.

I sewed across the top, then pinned it to the waistline of the bodice. I left all the pins in the pleats until after the skirt was sewn on. 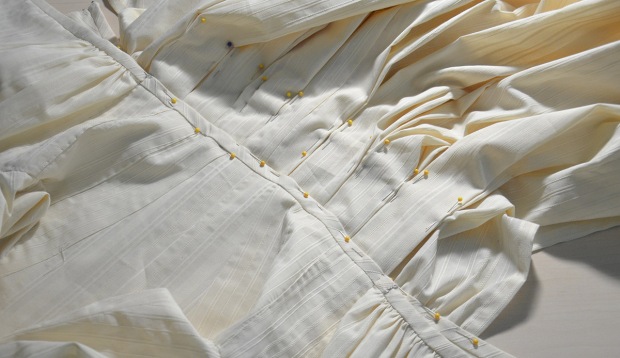 It was sewn on with whip stitches and now I had something that looks like this!

The front panel is made from a rectangle of a sheer curtain from ikea (which is roughly fifty inches wide) and a rectangle of muslin (forty-ish inches wide) that are sewn together with french seams. The back portion will be gathered and sewn in place but the centermost thirty inches of the curtain fabric gather down with a draw string. 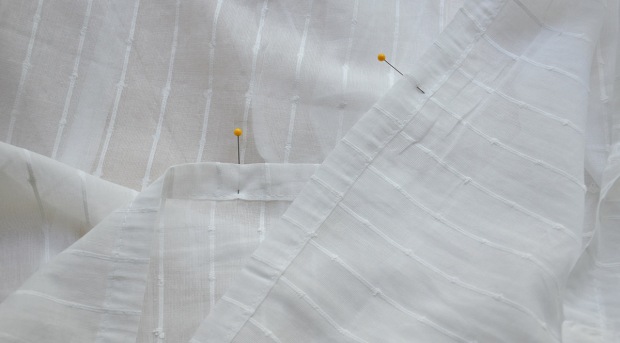 Ribbon is sewn over the 15″ marks, then tucked into a channel (which was actually the hem of the curtains). The ribbons poke out at the center point and can be pulled and tied to gather the material down.

After doing this I hemmed the skirt – I ended up hemming this again because it was an inch two long.

The portions of the top edge that don’t have a drawstring were gathered down by machine. 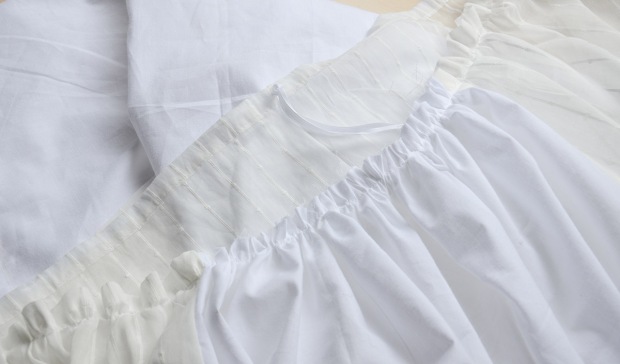 Then it was sewn into the waist of the skirt. As you can see the muslin panel is at the back of the skirt – it adds width to the hem of the front panel which makes it hang nicely, but isn’t visible when the dress is worn.

I’d planned on posting photos of the process of getting into this dress since it looks a big confusing, but it’s actually really easy! The dress can be stepped into, then arms go into the sleeves and the drawstring on the skirt is pulled until it’s tight it sits above the waistline. The “lining” of the bodice hooks together overtop of the skirt and keeps in place. Then the snaps/hooks on the bodice are done up and that’s it!

The headpiece for this costume was really easy. I’m not a huge fan of the popular turban headdresses from the 1790s (though I plan on making one for a different project) so I decided to make a hat instead. My usual methods of interfacing and wire seemed to heavy for such a summery dress, so I bought a cheap straw hat from Michaels. 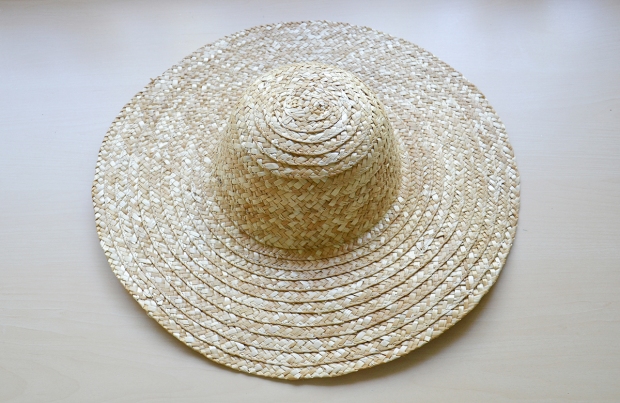 I made a TON of alterations to it (I filmed a tutorial of the process, which can be watched here if you’re interested) like lowering the sides, narrowing the brim, and reshaping the crown to make it more appropriate for an 18th century costume.

I also lined the hat with a scrap of the ikea curtains and trimmed it with a ribbon and bow made from leftovers of the yellow fabric. The final touch was a feather and some flowers. It isn’t perfectly accurate, but for less than ten bucks of materials and an hour of time i’m pretty pleased with it!

Here is the finished ensemble. Though I don’t love how this dress looks from the front (my frustrations with the volume placement mentioned in the post about making the bodice still stand) I like the silhouette from the side a lot. And the color scheme makes me happy – I don’t usually make light or summery dresses, so it’s a nice change.

It’s paired with a cheap blonde wig and a long strand of pearls from Kohl’s. Last minute I decided to stick a petticoat underneath it the dress – just a small quilted petticoat that has an eighty inch circumference and pleated waist, which added a lot to the shape of the dress.