This is one of those posts i’ve put off writing (much like all the posts to do with this dress…) since this didn’t turn out the way I’d hoped. Which is disappointing, but not surprising to me. A dress this simple shouldn’t take six months of on and off work to complete. The fact that it took so long shows me that I wasn’t excited to work on it, and there is usually a reason for that!

The last post about this project showed the making of the skirt, and the post before that shows the construction of the bodice. Which means all I had left to do was make the sleeves. I started by drafting a simple wrist to elbow pattern, with a point at the center.

The other portion of the sleeve is a massive rectangular-ish block that will be gathered down into a very full puff sleeve. You can tell I drafted these myself because they are symmetrical (rather than having a steeper curve at the front, and a more gradual one at the back) which is very unusual for historical sleeve patterns (and sleeves in general).

It’s also a bit unusual to draft sleeves from this period with a seam between the lower and upper portions. I chose to do this since the original plan was to wear this dress underneath a jacket, and I wanted to avoid additional bulk around the wrists which mutton leg sleeves tend to have.

The puff sleeves were bag lined with the lightest weight lining I could find. 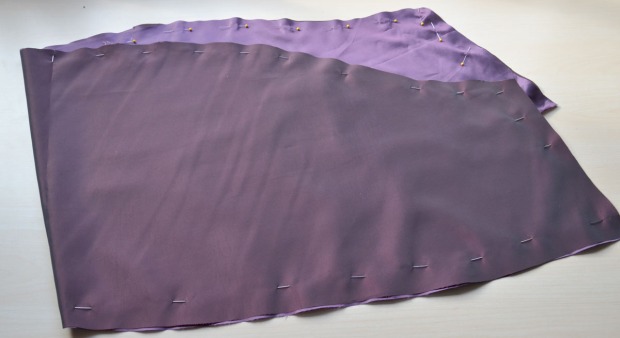 Then turned the right way out and gathered across the bottom edge. 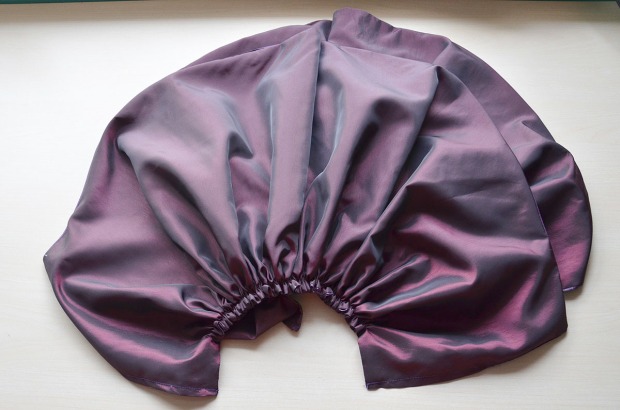 I added interfacing to the points of the lower sleeves, so that edge would stay defined. Then I turned the top edge inward by a half inch and stitched it down by hand.

I trimmed the top edge with lace, then stitched it onto the sleeve.

The sleeves seemed to be missing something, so I chose to do a bit of beading. The beading design is the same one I used on the neckline of the bodice.

I also ended up making a tutorial on how to do this, if you’re interested it can be watched here!

Now the back seam was done up with a half inch seam allowance and I lined the lower portion of the sleeve.

I actually really like how these turned out – even though the fit isn’t the best. I think the beading design compliments this fabric nicely and the sleeves are perfectly puffy.

I made the decision to leave the hem of the sleeves raw since I had originally planned on adding cuffs. The cuffs were supposed to be made from these beautiful satin collar pieces that have a winding soutache pattern on them. 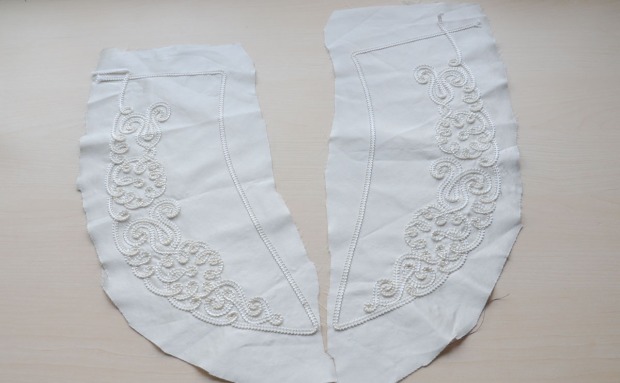 I even spend many hours beading the design to make them more elaborate. I love how they turned out, but they ended up being too large and bulky for this costume. They cut the arm off in a weird way and look too stark against the purple. So they have been stashed away and are being saved for another day.

Then I gathered the top edge of the sleeves down and played around with some quilt batting to make sure they could take on the shape I wanted.

And finally, they were sewn onto the bodice by hand. This was a pain the ass since polyester taffeta sucks to hand stitch through. It’s so densely woven that the eye of the needle seemed to prefer going through my finger rather than the fabric. But I got there in the end! At this point it actually looked pretty good.

Here is the bodice tried on over the original partial shirtwaist thing. I decided after this fitting that it was too casual looking, so I made a new one from silk satin.

This is also when I realized that there were some big fit issues. I’m not sure if you can tell, but it was very tight across the chest. Not to a point where it strained, but the it was obvious in person that it was too small. Because of this the bodice couldn’t be pulled down far enough for it to sit at the proper waistline. I kind of ignored these issues at the time – I thought once the skirt was on it would pull the bodice down and it would be fine.

Since the bodice wasn’t where it was supposed to be, it gives and awkward side profile as well. The volume is supposed to be right above the waist, which makes the waist look smaller. But this just made the area below my chest look massive. Once again I assumed it would be fine after attaching the skirt.

And the back. This looked a lot worse in person, too. The back panels were cut on a different grainline from the rest of the bodice, and the difference in sheen was very obvious. It also strained horribly across the back. This is partially because it’s a bit too small, but I think flatlining it with a different fabric would have avoided this. Polyester taffeta just doesn’t look good when strained.

After this fitting – and making a different garment to wear underneath it, I switched out the buttons for vintage glass buttons that matched the beading. A much better fit than the gold ones I used before!

The skirt and bodice were both sewn onto a strip of interfaced cotton, with the raw edges facing outward. The waistband will cover these edges. 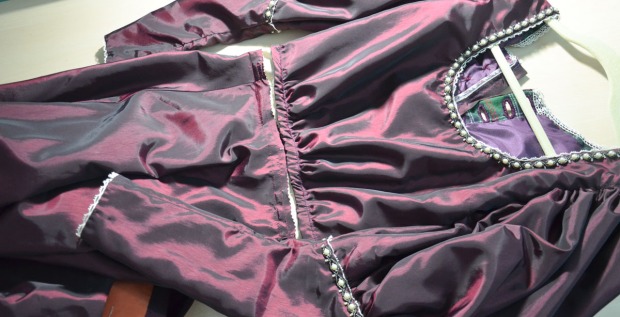 And speaking of the waistband, that was made from a pattern that looked like this! 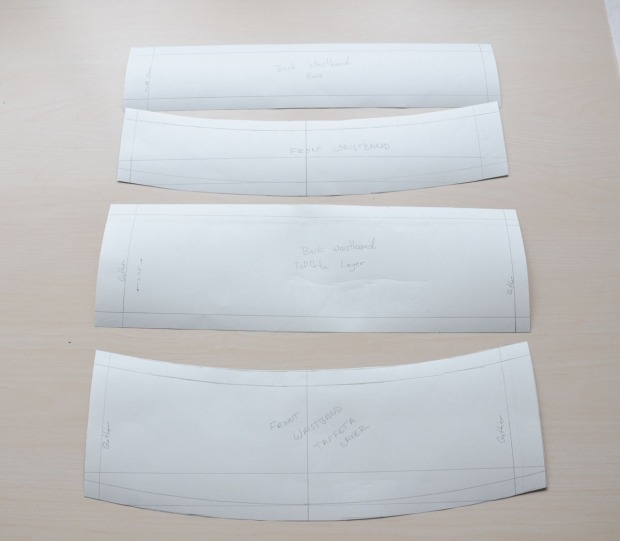 Unfortunately sewing it all together didn’t magically fix the bodice fit issues. It’s really tight across the chest. Like a whole inch too tight. I can wear it, but it  can’t be pulled down low enough for the belt to sit at my actual waistline. The waist of the dress is too small as well – To get it done up I had to wear it with my 1860’s corset, which is too short waisted for the dress to sit nicely overtop of it.

Also the closure method for this dress was stupid. I decided to add hooks down the side, with buttons down half the back. If this had worked, it would have meant I could get into the dress without help. But the back didn’t open enough, and I ended up needing help just to get it over my head! Plus the lack of mobility from the sleeves meant I couldn’t do up the closures.

And that’s not even mentioning the puckering at the back and hem length. One of those things is fixable, but i’m not sure I can be bothered.

Here it is worn without the undershirt. 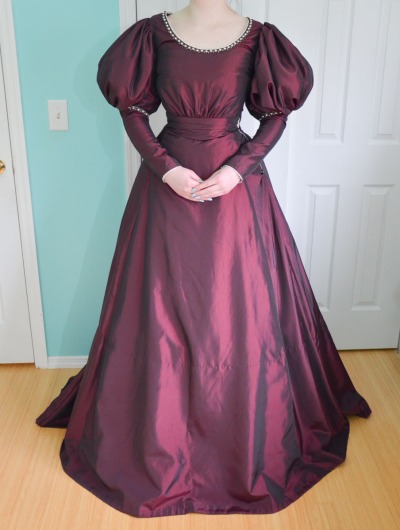 The closures on the side didn’t end up being hidden, since the bodice was tight the hooks (though done up) caused the fabric to gape. You can slo see the strap of the bodice sitting away from my shoulder, which is because the bodice can’t be pulled down properly.

The dress is too long waisted in the back, causing the puckers to look even worse. But on the bright side, I really like the gathers at the back of the skirt. They looked a bit rough up close but I would consider using that technique again on a different project.

Is this dress fixable? Probably. But it would involve removing the sleeves and skirt, adding panels to the side of the bodice (though there is enough room to let it out, this fabric shows needle marks), adding additional closures to the back of the bodice/switching the skirt to a back closure, regathering the skirt, and hemming it. And it’s really not worth the time and effort that would take.

Looking back it’s easy for me to see where this dress went wrong – there were a lot of poor decisions and mistakes, one after the other. But it happens sometimes – ecspecially when learning, and adventuring into a new era so i’m not going to mope about it.

I’m actually really excited to put what I learned from this project into a attempting a better dress, which will have a similar silhouette and belong to the same era, but is a completely different design (that resembles the original inspiration for this dress quite closely). But i’ll talk more about that next week!

Before signing off I just wanted to show you the hat I made to pair with this. I based it on an edwardian design since I thought a larger hat would look better with the proprotions of this dress, even though it isn’t accurate to the 1890’s. The brim is buckram with three bands of wire. 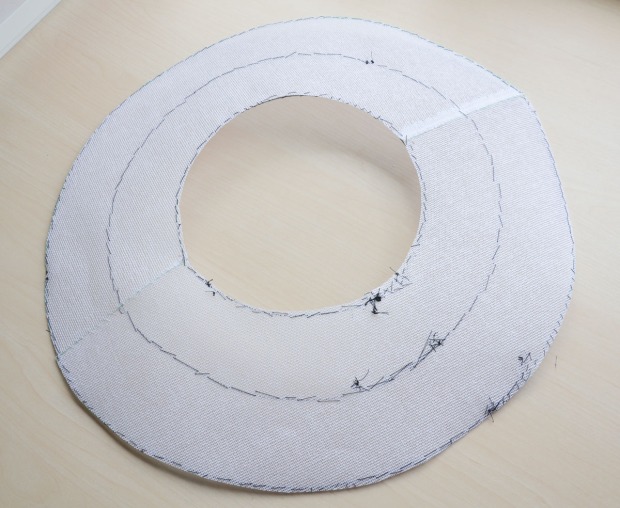 And the cap is interfacing, cut from this pattern and edged with wire.

All the pieces were covered with taffeta and stitched together. 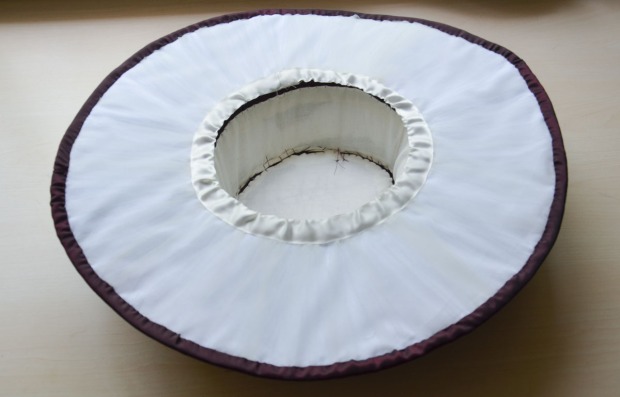 The exterior is trimmed with some fake flowers and a huge feather! The hat is honestly my favorite part of this project – I feel like I magically turn into a stuffy rich old lady when I wear it. And I mean that in the best way.

This was my first time using leaves on a hat in addition to the flowers, but I really like it. It doesn’t make the flowers look more realistic exactly, but it certainly adds more interest!

And that’s it! Thanks for reading!