It took me longer than it should have, but here is part two of making my Rapunzel inspired 1820’s dress!

If you missed part one, it can be read here. And I’ll be picking up right where I left off!

The pattern was originally drafted for an 1820’s dress that has a similar armscye and silhouette, luckily the proportions worked out really well for this piece too.

Like the bodice, these were cut from the glittery floral overlay and satin, then sewn together before construction.

I gathered the sleeves by machine. The top was gathered down to 17″, and the bottoms to 12.5″. Then I attached them to a cuff, which is made from scraps of the netting and satin, trimmed down to form a 1″ strip.

I thought the sleeves were missing something, so I added a lace ruffle.

The sleeves were sewn on to the bodice with 3/4″ seam allowances. This seam also helped secure the bands at the neckline. 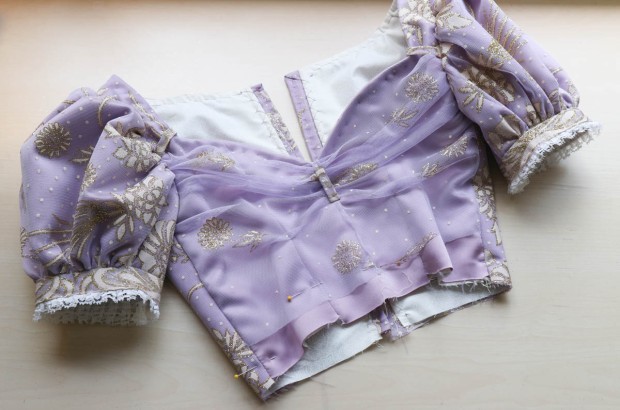 At this point it was really coming together!

I bound the raw edges with some eyelet lace – I picked up a 300 yard spool of this lace, so you’ll probably see me use it as seam binding in a lot of future projects!

(also the extra is listed here – if you’re interested in it/supporting the blog!)

With the sleeves sorted, it was time for the skirt! I intentionally left this for last so I could use all the remaining material and get as full of a skirt as possible.

I started by straightening the short edges of my remaining satin, then I trimmed 9″ off the long edge. The end result was a 53″ x 125″ rectangle.

I hemmed the satin layer with horsehair, which stiffens the hem and causes the skirt to have a bit more volume. I also gathered the waistline down to 25″ to match the width of the bodice. 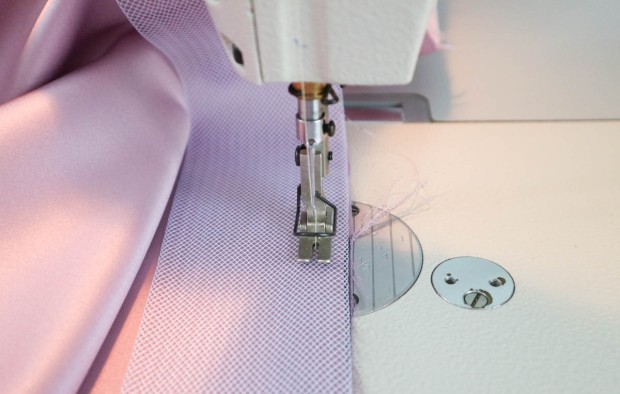 The overlay is also a rectangle, and was cut to be a half inch longer than the satin layer.

I took some of the length off the top of the netting, and some off the bottom since I wanted the hem to follow the straight floral boarder rather than starting at a random part of the design.

I had originally intended to fussy cut around the scalloped edge of the netting and let that be the hem. But on my past couple projects that hasn’t worked out well – the skirt seems to short if you cut it so the edge of the scallops graze the ground (since the arches between the scallops are higher), and too long if you make it longer.

This netting was also just stiff enough to pickup lint and threads when it dragged across the ground, so an actual hem seemed like the best idea.

I ended up doing a 1/4″ rolled hem, which was stitched down by hand with whip stitches. 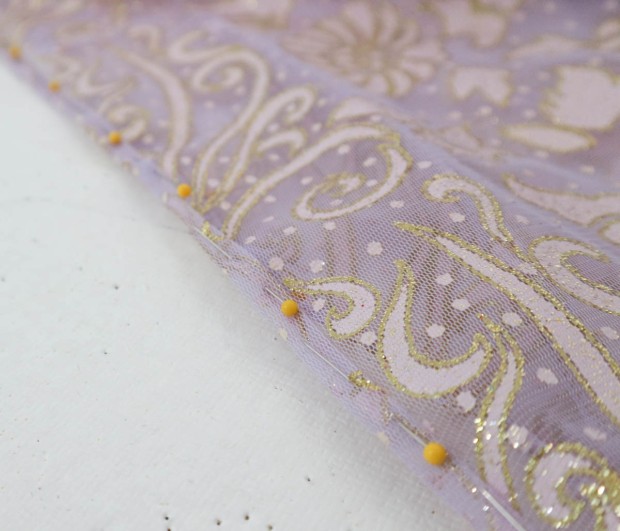 Then I sewed the back seams for these layers individually, leaving a 10″ opening at the top to serve as the closure point.

I gathered the top edge of the netting as well, then sewed the layers together at the top edge. Here it is on my dress form over the appropriate petticoat. 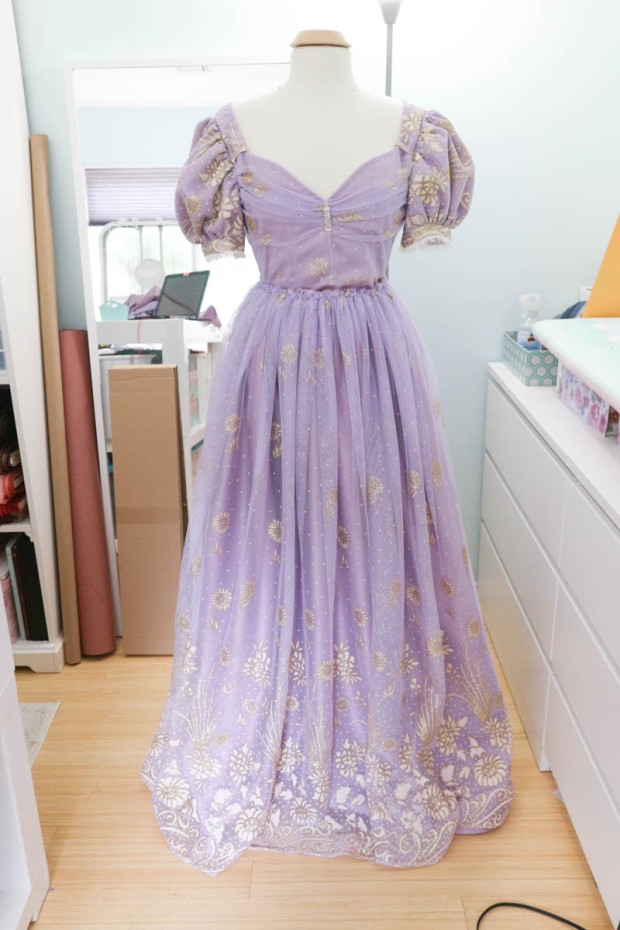 I also basted the layers together 1.5″ away from the top edge. This is to prevent the layers from flaring up and getting caught in the waist seam as I sew it. This happens to me all the time and this does a really good job of preventing it. 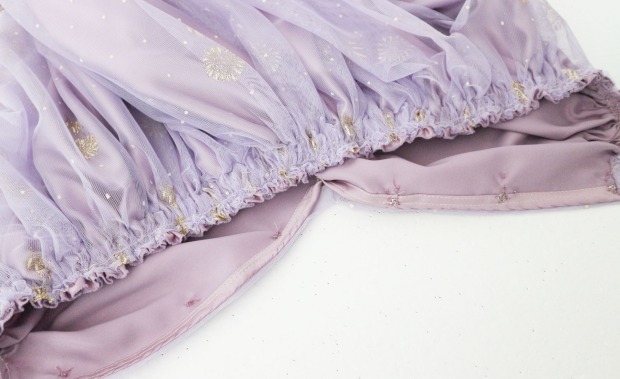 Here are the pieces sewn together – I ended up leaving the seam allowance raw, since it wasn’t fraying much and I didn’t want to add bulk to the waistline. But I do have an abundance of purple seam binding, so I can always do that later…

The final step was sewing on the waistband, which is a scrap of netting that I fussy cut out. This was actually one of the first pieces I cut for this project, since I wanted to make sure I had enough material to do it and I was worried I would forget if I left it until later.

These two photos were taken in my sewing room, which is painted blue, so the colors are a little cooler toned than the dress is in real life.

And these photos are taken in my bedroom, which is ivory and red, so it makes the dress look a lot warmer toned than it is. But at least you can see it full length without a distracting background of figurines and fabric (which is what my entire sewing room is).

I also tried this dress with a few brooches, since that was how I intended it to be worn. But I like the banding detail so much, I think this takes away from the overall design.

This is the one I was originally going to use. I think the metal is too brassy.

And a different one, which was actually my great grandmothers. A better tone, but maybe not the right shape? What do you think? 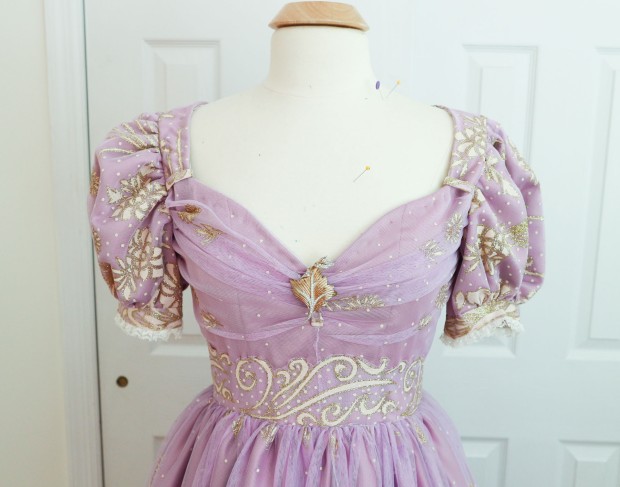 And no photos of the back, since there is a 4″ gap at the waistline which doesn’t look very nice. I’ll try to get some when I take worn photos!

I think that is it for this dress! Overall it was a very fun project. It took me three days of work, and $65 worth of materials. I think it turned out beautifully – I love how it looks historical but has a fantasy element based on the fabric alone.

If I see more fabric like this in the garment district I’ll definitely snatch it up – I had so much fun working with it, and making this piece. One of the few cases where I wouldn’t mind making another one to sell.

Thanks for reading! I think my next post will be about an 18th century piece…or that progress report I promised…or a haul & store review post from a trip I recently took to PA.