Today I’m writing about a project I finished almost six months ago. This was made in the summer, a few days after I discovered and binged the entire first season of Poldark.

I loved that show. From the story to the way it was shot to the costumes. It was my first time seeing lower class garments from the late 1700’s represented on film and I quickly decided I had to make something inspired by it.

I went into this project being really excited. I’d been working a lot on my beetlewing dress and thought this could be a fun fast project. And it was! But that mindset lead to me rushing the earlier, very important steps which I don’t find as enjoyable. Mainly the pattern drafting and fitting process.

From a distance I don’t think this project looks awful – or even bad. But there are a ton of problems with the fit that wouldn’t have been problems at all if I had been a bit more meticulous in the earlier stages. 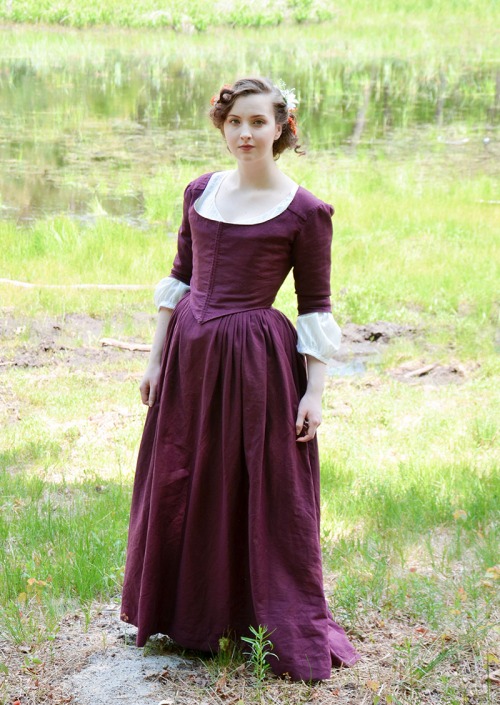 The reason I’m talking about this project now is because it recently motivated me to make another “simple” late 18th century project, just without the plethora of fit issues. And I succeeded! The dress turned out so much better than this one. But honestly, I learned a lot more from this failed attempt than my new pretty dress. And I thought you might too, so let’s go through how I made it, and what I should have done differently.

(Note, there is also a video showing the construction in more detail. It can be watched here)

My 18th century bodice pattern is constantly evolving. Three years ago it started as an incorrectly scaled up version of one from Janet Arnolds Patterns of Fashion 1*. But it has been altered to an unrecognizable state, with me “fixing” things every time.

The last time I used this pattern was for a striped taffeta evening gown. That ended up a bit too small, and cut too high at the waist. So I fixed those things and also changed the shape of the points at the front and back to better represent the later period.

I’m pretty sure I made a mock up of this, and it fit “well enough” so I moved on right away.

The construction was super simple, I cut the lining from ivory linen and assembled it by machine.

I turned all the seams inward, then pinned them down. Once sewn these will create boning channels which add support to the back and sides of the garment. 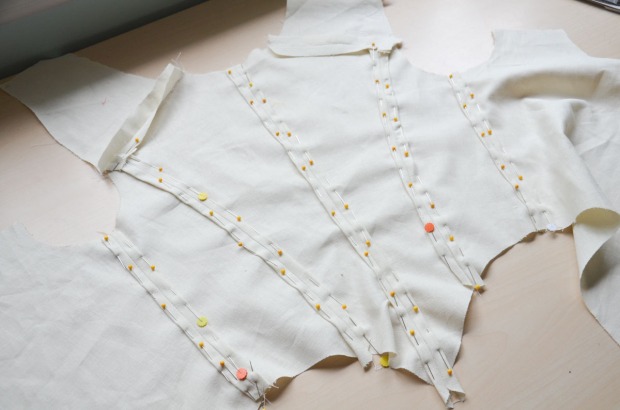 Here they are after being sewn. I filled these with 1/4″ plastic boning which was purchased from onlinefabricstore.net

Then I assembled the top layer, this time from a brilliant purple linen. The fabric is probably my favorite part of this costume, it’s such a great color! I think it’s around $20/yd from Jo-anns but with coupons it becomes a lot more reasonable. 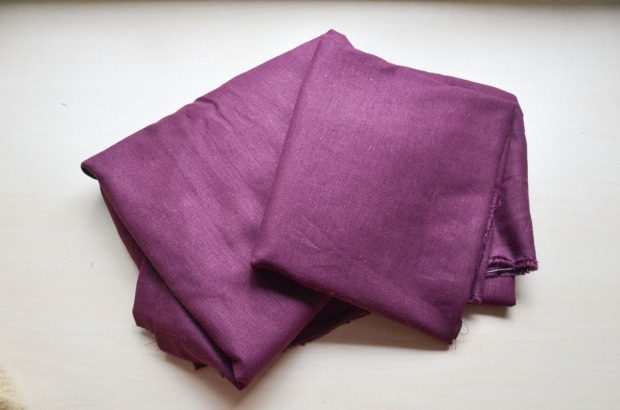 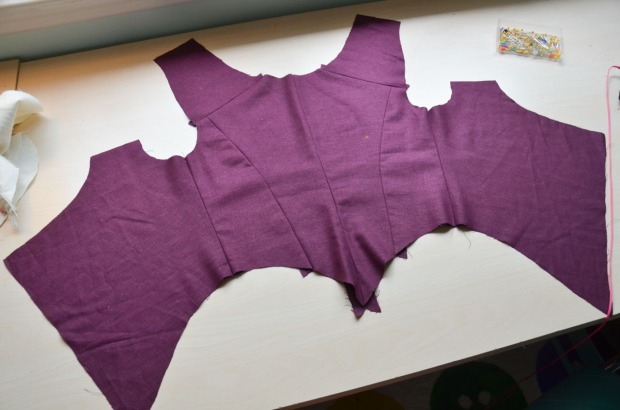 With the wrong sides facing each other and a half inch seam allowance I sewed around the edges. The only edges I left open were the tops of the straps. The entire bodice (including boning) was turned the right way out through these two inch openings.

I’m absolutely shocked this worked. It took me a good twenty minutes, but eventually I got it done! Then I used a pencil to make sure all the corners were sharp and pinned around the edges. 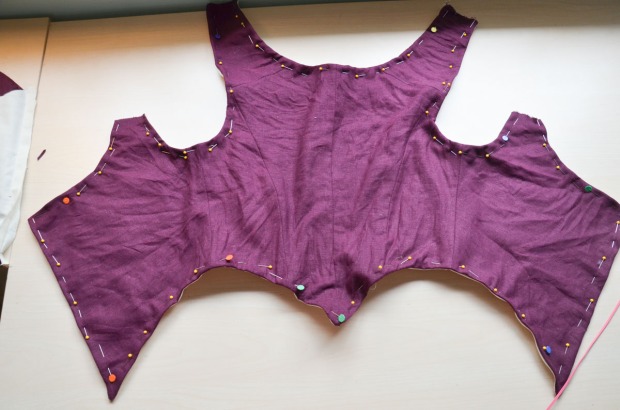 I sewed around the edges by hand, using matching embroidery floss. I left my stitches pretty large since I wanted them to be visible. I’m really happy with how this looks, it shows up in a lot of the photos and adds a bit of texture and a home-made feel. Exactly what I was going for! 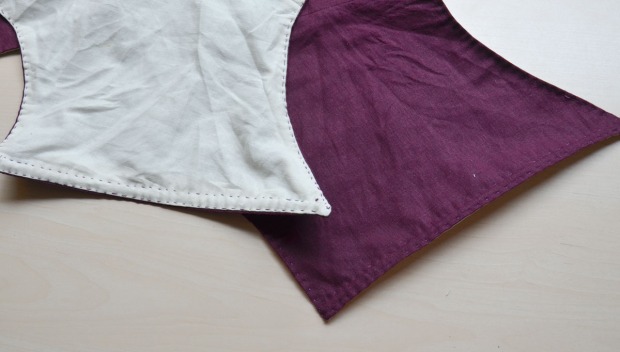 The closures for this piece are hooks and bars. I usually use loops and hooks, but decided to give bars a try. I liked how these looked, but they did not want to stay done up. I’ve had this problem before with skirts that are slightly too large – they seem to undo themselves! I need to start alternating hooks and bars on each side.

The last step were the sleeves. I believe these were cut from an altered Janet Arnold pattern, too. They really don’t suit this style of dress but I didn’t take them time to draft something more appropriate.

They are lined with linen as well, and I topstitched by hand across the hem.

I gathered the tops to fit the armscye, then whip stitched them on. I didn’t even finish the tops of the sleeves!

And that is pretty much it for the bodice. 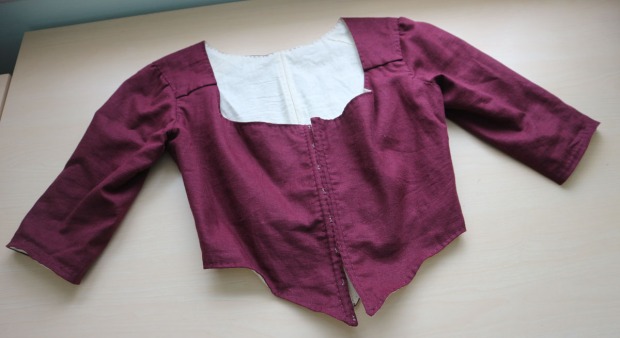 However you may notice some ugly darts on the back panel. This is because they were WAY too wide, and gaped away from my body pretty spectacularly.

The skirt was a rectangle, with a sloped top edge. I cut it out with measurements I took at the beginning which is not what I would recommend doing at all.

I think it’s much better to cut all the panels as rectangles of the same length, then sew and pleat them accordingly. After the top edge is pleated down, adjust it on your dress form and trim excess off from the top.

When you trim it before pleating, there isn’t a straight edge to use as a guide when marking the pleats. Because of this I could not for the life of me get the pleats even. I ended up doing a lot of them by eye while it was on the dress form, leaving the interior looking like this… 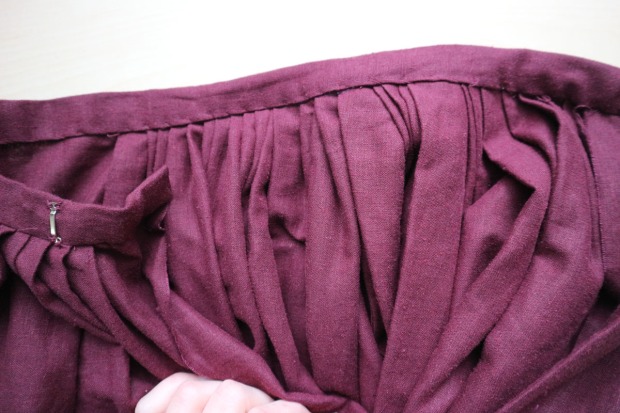 The top edge was bound with straight binding sewn on by hand. I used a skirt hook as a closure. The closure is at the centerback, which I also wouldn’t recommend. The back of the skirt is where the most volume should be, adding a closure there prevents it.

I topstitched the seam allowance on the center back seam down by hand to mirror the handwork on the bodice. 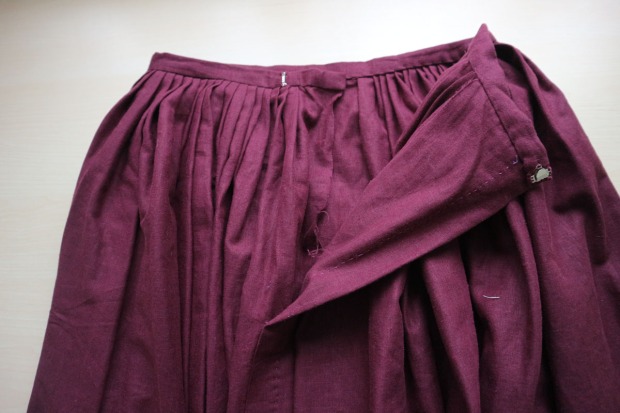 The hem is the best part of this. It is a rolled two inch hem, which was sewn by hand with running stitches.

And that is it! How about we take a moment to appreciate these photos before I tear it to shreds. 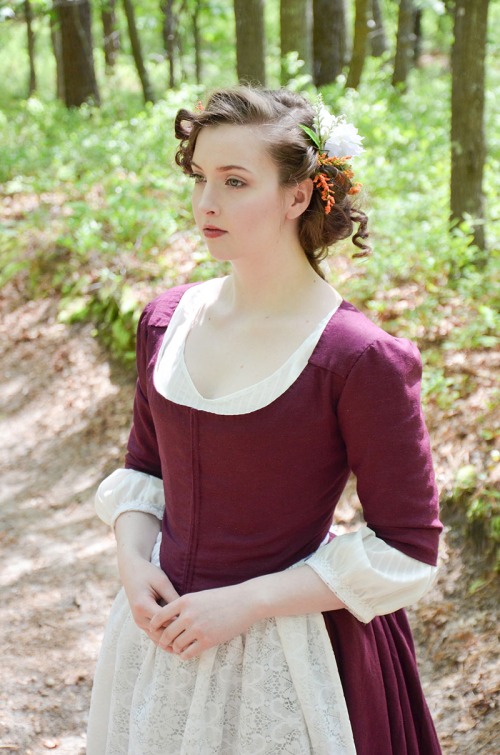 Okay. So what is actually wrong with this?

The skirt has a few problems I already mentioned. I should have trimmed the top after pleating, not before. This lead to uneven pleats, and the hem being really odd. The skirt is several inches off the ground at the front, and slopes dramatically at the back to the point where it drags.

I placed the closure at the back, which I’m not a fan of. And my attempt at pleated by eye means the overall top edge measurement was wrong. This causes the skirt to slip off the waist and leaves the top edge visible below the bodice.

For the bodice, the techniques used were fine. I actually used the exact same process for my new and improved 18th century dress. The issues all come down to decisions made in the first hour of starting on this.

AKA: Not testing my pattern properly.

I made a mock up, but a mock up isn’t everything. The real fabrics will behave very differently and constant fittings are crucial to a good finished product. I don’t think I tried this on over stays until the entire thing was finished, which is a huge no-no.

There are also things I should have picked up on from the first mock up which I missed. Mainly that the armscye were way too wide and deep. This hinders mobility when paired with a fitted sleeve, so I used a wider sleeve pattern, which didn’t suit this period and wasn’t very flattering. I didn’t test this sleeve pattern either, so it ripples a lot and has too much volume in the shoulder. 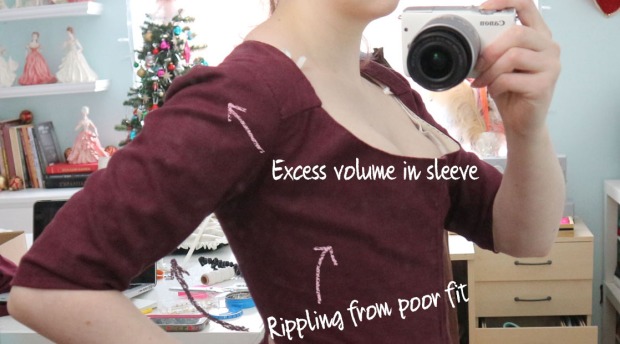 Another flaw is how wide the straps were. They extend to the very edge of my shoulder. That paired with the volume in the sleeves makes my shoulders look broader than they are. I believe I made them wider to support the neckline, but if the rest of the bodice fit properly that wouldn’t be necessary.

Speaking of poor fit, this bodice was way too big for me. Especially in the bust. I can pull it almost two inches away from my chest.

This causes gaping, and folds of fabric near the armpit. You can also spot the sleeves wrinkling heavily in this position.

The final problem is the back panels not being fitted at the waist…at all.

I actually found this part very difficult to fit on my reattempt too, unless you have someone with experience there to help you it’s tricky. But I’m not sure how I got it this wrong.

This effectively ruins the side profile of this dress.

It’s probably three and a half inches too big at points. Ridiculous! And this is after adding the darts. Those darts also had an unfortunate side effect – it caused the point to stick out like a little tail unless pinned down.

And another cameo from the slipping waistband.

I think that covers all the issues. A lot of these could be fixed with darts (lots and lots of darts) but that wouldn’t look very good. Fit issues this dramatic really need to be resolved before cutting out the bodice. Or at least before sewing the lining and top layer together.

It would take more time to fix than it would to remake, so I don’t plan on revisiting this piece. But I’m not too upset, I wasted some fabric and a few days of time, but I learned so much. And I’m happy to take everything I learned and put it into a dress that doesn’t have any of those problems.

In fact, I already have, and I love it a lot! 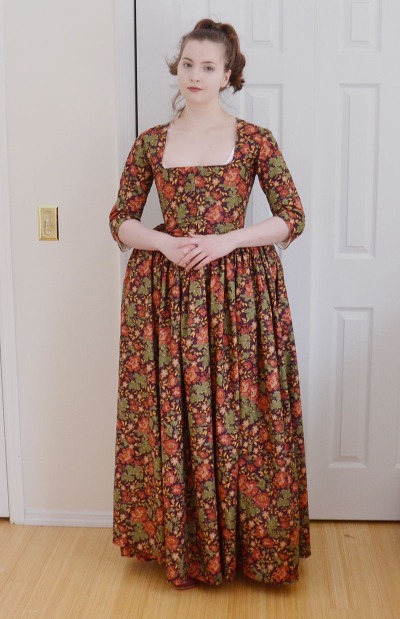 Construction notes on that should be up tomorrow, so keep an eye out!