The project was originally inspired by this ensemble, but was shaped by dozens of fashion plates I came across when researching the 1890s. I didn’t have a very clear vision when I started this project, so it was constantly evolving throughout the sewing process.

This project began as a skirt, then expanded into a full ensemble that consists of four main pieces, which include a skirt, jacket, blouse, and hat. The costume is made from six yards of faux wool flannel, cotton lining, three yards of silk, and a variety of buttons, trimmings, and scraps of material that I had left over from old projects. I estimate this project has around sixty dollars of material in it, including the price of scraps I used.

Everything was drafted, draped, and designed by me except for the jacket sleeves, which were from a pattern book.  The skirt was the most time consuming part of the project, since assembling the pieces was a very long process. Each one was carefully cut out on the bias then hand basted together to make sure each line matched perfectly. Then the seams were trimmed and basted by hand once again to create french seams. This was repeated more than a dozen times until the skirt was constructed.

The jacket was made using a similar process. It’s made almost entirely from the faux wool, with silk lapels and cotton lining. The back of the jacket and the lapels feature detailed soutache patterns that were designed by me, then made from fifteen yards of soutache braid that was stitched down by hand. The front of of the jacket is finished with more soutache details and nine domed buttons. The sleeves are plain, made from a two piece pattern and trimmed with a bit of vintage lace.

The blouse is a bit odd in design, more like a corset cover than a functional shirt. It’s made from two yards of ivory silk satin and is fully lined with a lightweight cotton. It closes at the back with a mixture of hooks/bars and ties, including a one at the collar which can be knotted into a large bow that sits at the back of the neck. The front of the blouse is finished with three shell buttons.

The hat is made from a mixture of buckram and felt weight interfacing. It’s covered with silk and lined with bright red velvet. The cap portion is trimmed with a matching ribbon, lace and a bow. The brim is decorated with partial pheasant pelt, which was a common trend during the 1890s.

The ensemble is worn over two petticoats, a chemise, and a corset, which were all made by me as well.

Part One, Making the Skirt 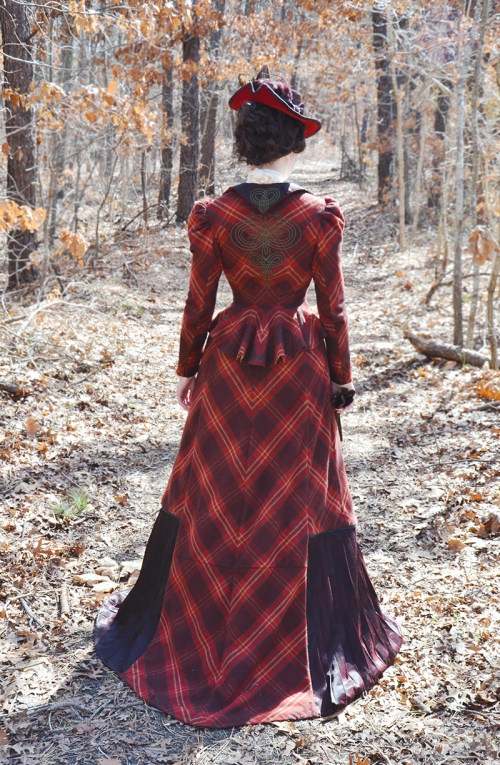