This is the first post relating to this costume- I will probably write part 2 sometime mid October, since that’s when it will be fully completed. I *might* not even bother since this post will cover almost everything – aside from making the bear a prop, which I haven’t started on.

That’s a probably, not a promise, so don’t bother keeping an eye out.

Anna sent me a message saying she was going to be on Long Island for the weekend, and asked if I wanted to shoot. I jumped on the opportunity- only to realize I didn’t actually have a costume that was finished and ready to be shot.

So I decided to finish this!…Kind of. I didn’t get some of the details done, and obviously I’m missing the bear and accurate footwear (finding boots in my size is impossible this time of year) I plan to get everything fixed up before wearing this to New York Comic Con, which is where I originally planned on debuting this.

So this is Vlad Tepes, also known as Vlad the Impaler, or Dracula. But of course, it’s a cutsey’d up version designed by Oyari Ashito for the Story/ Strategy game Eiyuu*Senki (Princess * War Hero)

I really love this game, it’s fun and entertaining (despite it being in a different language) and I’ve enjoyed every second that I have spent playing it. Vlad isn’t a character I usually reach for, because I’m not super fond of her attacks. I’m more of a canoneer, or explosive force based character fan..But Vlad is adorable, and I think I’m pale enough to pull off her vampire-esque features.

I also really wanted to make something ruffly! After Napoleon and Marika (which is still unfinished) I was kind of sick of tailoring jackets. Instead I wanted something frilly and easy to make, which is exactly what this costume was! Such a fun and refreshing costume, although it was more time consuming than I would have liked…

Like (almost) all my costumes, it started with a mock up.

It came out pretty ugly, though this isn’t terribly surprising. Luckily all the main elements were okay, such as the sleeves and fitting in the bust.

After taking the front seams in a bit I tore this apart and paper patterned it, it ended up being a fairly simple bodice. I chose peachskin as my main fabric since it’s soft, wrinkle resistant,  lightweight and silky but still heavy enough to hold a ruffle. It also drapes really nicely which made it good for the cape. 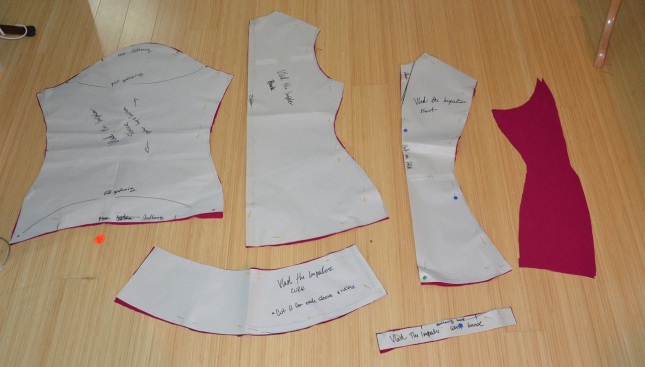 Once that was all cut I sewed it together. Everything has 1/2″ seams which were pressed flat, nothing complicated here. 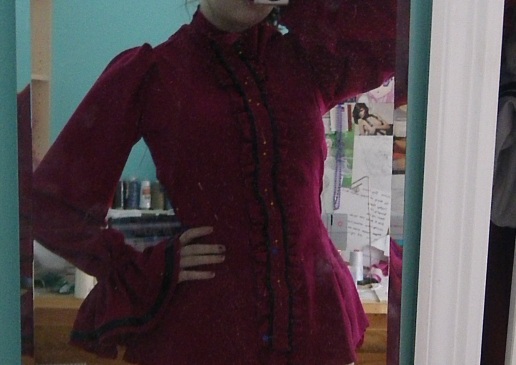 And then it was time to begin work on the skirt! I was half excited, and half dreading working on this skirt. Each tier is four circle skirts, with horsehair braid in the hem, which means I get to do a 24 yard hem TWICE. Why yes, forty-eight yards of hemming, lovely, isn’t it?

I made my Napoleon skirt this exact same way, so if the process looks familiar, that’s probably why!

Step one is cutting out all the circle skirts. Quite the task when you need eight of them!

Horsehair braid get’s pinned, then sewed into the hem.

Then that get’s rolled over, pinned, and you sew it yet again!

And then comes the ribbon. 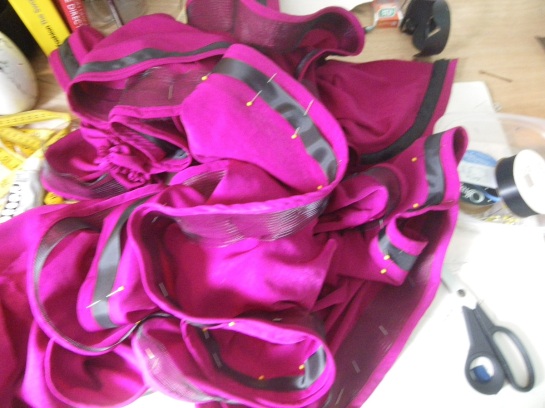 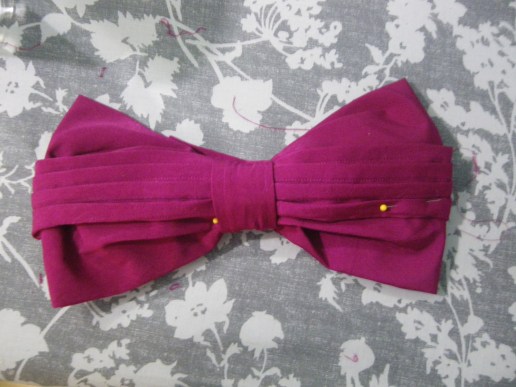 .Then we move onto the cape, oh god the cape. The cape took more time than the entire dress, It was ridiculous.

Since I wanted a very full cape with little volume at the nape of my neck, I decided to make it a large (39″) half circle “skirt”.  Once again, I used peachskin for this.

Later on I went back and added interfacing to this entire black panel since it didn’t drape the way I wanted. It just sort of hung there in an unattractive manor and the batwing shape wasn’t very obvious, the interfacing stiffened it up and really improved the appearance.

Since the lining is striped I had to cut out all forty strips and sew them together, quite the task! 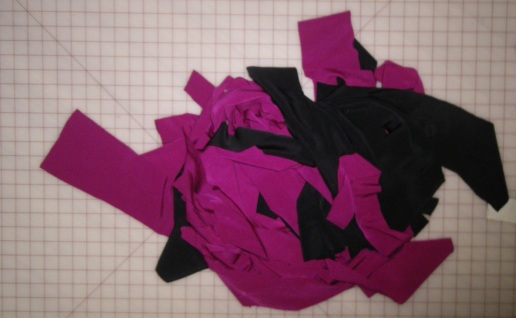 And when you think you are done…Nope! After I painstakingly sewed all of these together, it was time to iron all the seams open. Which was more time consuming than the sewing portion of this project.

It also resulted in far more burns than I would care to admit. 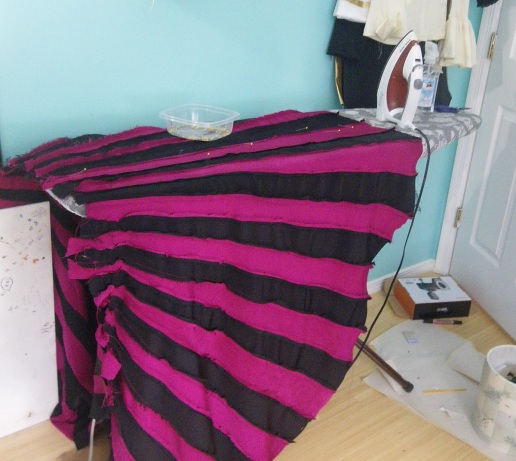 Once that was done I cut out the “batwing” shape, this part was really nerve wracking since there was no way to test how the shape would look, and obviously after it’s cut there is no going back. 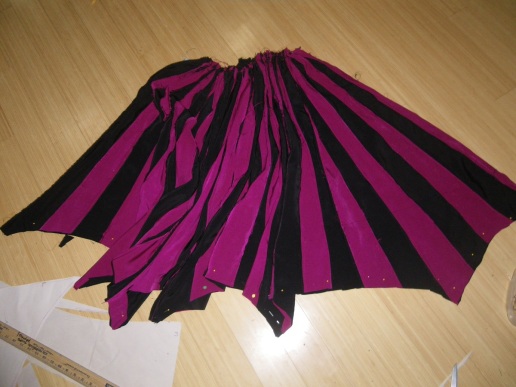 I sewed it right sides together (like a pillow case!) and top stitched it.

The collar was drafted super quickly, it’s peachskin stretched over the felt weight interfacing that I usually use for hats. I went through and tacked the cape in maybe thirty places, this ensured that the layers stayed together and kept it all smooth looking.

I sewed on seven 2″ pom poms and my cape was DONE. The collar looks a bit crooked in this picture since I was lazy about pinning it onto the dress form, but rest assured, it’s perfectly even.

I feel like this cape resembles something a circus ring leader would wear moreso than the infamously cruel Vlad the Impaler, but hey, it’s accurate to the design.

I chose a wig from the ebay store “cosplaywig” for this costume. They make the softest, thickest, prettiest wigs ever, they manage to make the weirdest colors look (somewhat) natural and flattering. This wig is no exception, it’s GORGEOUS, even though white/silver/grey isn’t a very attractive color on me.

After a bit more fixing up on the dress it was DONE. Or at least done enough for the photoshoot with Anna Fischer, I plan to fix it up before comicon.

This shoot was really neat, we ventured out into the forest and came across all these creepy dead vines and rosebushes. There was also this hill covered in moss…I don’t think any of it was “pretty” but it was a wonderful backdrop for this creepy but vibrant character. 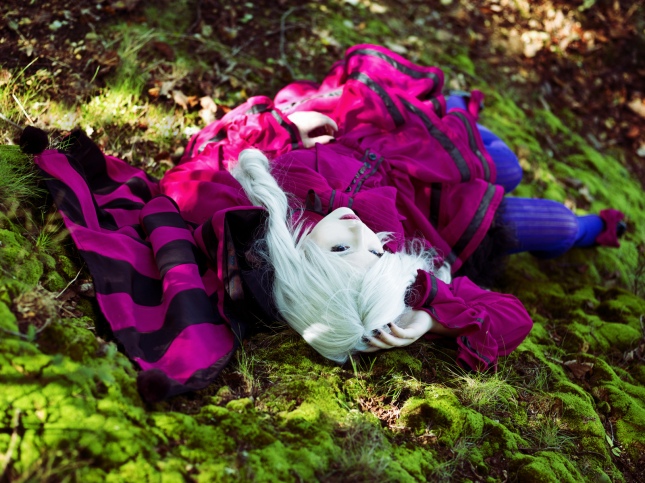 Once we left the forest we went over to “The Portly Grape”  an abandoned brothel turned restaurant which is currently vacant. It’s a really impressive structure with a lot of white victorian metal work, I’m really looking forward to seeing shots from that location!

A bit of a fun fact (at least I think it’s fun) is that I listened to The Addams Family musical soundtrack all throughout making the cape of this costume. It’s really fun, cooky music with underlying creepiness, and it definitely helped me get into a better mindset while sewing dem’ stripes together.

It’s really worth checking out, in my opinion!

Kudos to you if you read through all of this! I’ve started on my next costume already and should be sharing progress on it in the near future.

Make sure to check out both Anna Fischer’s and Oyari Ashito’s work!

As always, if you have any questions or concerns feel free to ask!

Also, I have plans to re-do my blog theme, so over the next few days it may be a bit funky.

Edit: I’ve recently created a video tutorial going through this process, if you’re interested it can be watched here!

Hello everyone~ I’m getting an early start on my AnimeNEXT cosplay and thought I would share some of it with you guys. Also, my “The world god only knows” uniform part 2 will be up VERY soon. Expect it in the next week!

Napoleon’s skirt is ridiculous in the poofyness and ruffle department, seriously it’s insane. So right away I knew that I would need tons of material, and some sort of stiffening for the hem. Luckily I already had several yards of white bridal satin laying around, then the other day I picked up 12 yards of horsehair braid, which meant I had everything I needed to get to work.

Step one was drafting a quick circle skirt pattern, I think everyone has seen these before, but this is what mine looked like. Please excuse my terrible handwriting.

Next step was cutting them all out, in total I cut out 4 circle skirts. 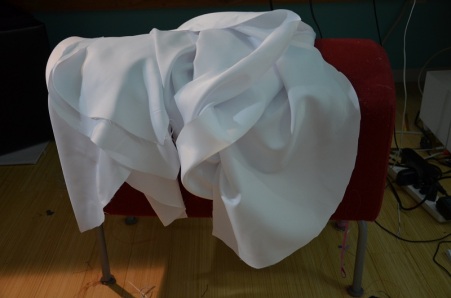 Then I sewed them all together. At this point they didn’t look much like a skirt, but they made a lovely scarf. For reference of how much material was here, I’m around 5’ 10”.

Then came the pinning. Oh god, the pinning. The hem was 12 yards, which means it tookages to pin it all, and to make things worse, my bobbin ran out half way through without me realizing, which meant I had to do even more pinning then I had originally planned.

And for those curious, this is what the horsehair braid looks like.

After it was all hemmed and had the horsehair braid added you could see the ruffles forming. Modeled once again, as the lovely scarf that it was. 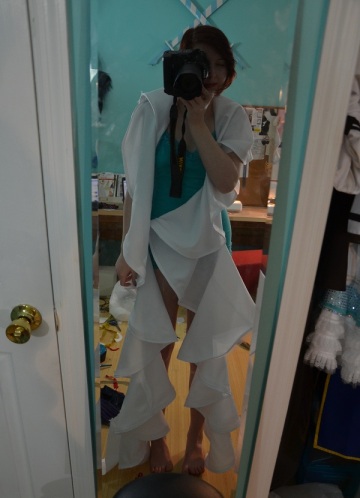 Since a corset/vest is worn over my waist, I couldn’t have the ruffles extending all the way up. So I made up a waistband, it’s made of three panels and has interfacing in all of them. Then I went ahead and lined it for good measure. This is also where I gathered my “scarf” down into 40 inches of ruffles.

Then I sewed them together, and looky here, It’s pretty much done! I just need to tack down some of the ruffles and add a zipper. But that should be very easy.

I added a petticoat for more “oomf” 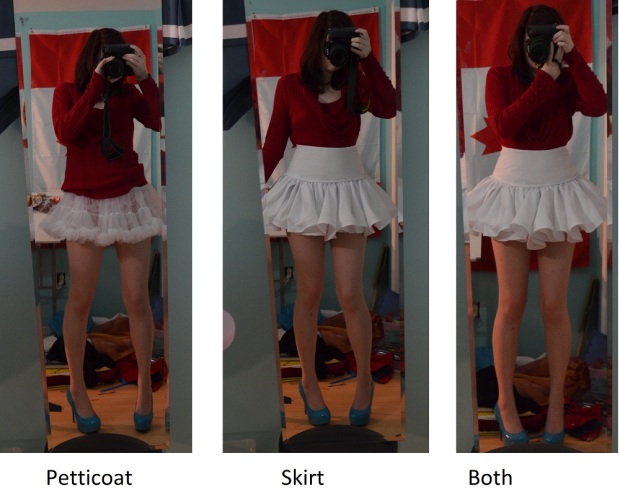 And then I went through and sewed certain parts down, giving it all a more uniform look.