Do you ever wake up with an overwhelming urge to make a gothic butterfly crown or is that just me? Because last week that was the exact thought I had upon waking, and I was determined to do it.

I have mixed feelings about the finished crown, I think it’s neat but I know it could have turned out better. This project is really different from what I normally make, it involved a lot of experimenting so it’s a miracle the end result is even wearable! I think if I were to remake this it would turn out much better, so the issue wasn’t with the method, it’s with the execution.

I filmed the process of making this, so if you want to see how I did it in live action you can watch the video below or click here! If you are interested in actually learning how to make this crown I would suggest you keep reading, since far more information is provided in this post than in the video.

(playable videos do not show up in most emails)

I’m still trying to figure out how to ensure the lighting, angle, and focus of the camera remains the same throughout each clip. The camera I use to take progress photos is the one I use to film, so every time I need to take a picture I have to disrupt the video. I’m also using only natural light and it’s not very dependable. Hopefully I’ll improve on both of these things in the future.

Anyway! I wanted this to be drastically different from my last butterfly crown so I had to get creative. I decided using a darker color scheme, less butterflies, and arches would do a good job of making it unique.I didn’t draw out a sketch or anything, but I knew what I wanted it to look like in my head which was good enough!

I started by measuring my head, then added almost two inches to account for a wig or elaborate hair style. Later on i’ll be making a headband which will match that measurement exactly.

I wanted to mount six wire arches onto that headband, which meant they each needed to be 3.5″ at the base. I played around with a ruler and french curve until I had an arch shape I liked, then cut it out of thick paper…which in this case was a snickerdoodle box.

Then I used tin snips to cut floral wire into pieces that were long enough to make into arches. I bent each piece of wire around the paper arch base until they held the shape I wanted.

Despite my best efforts I couldn’t get them all to be smooth and perfect. If I could go back I would spend way more time trying to get them as close as I could, because in the finished piece the wiggly wire is what bothers me the most!

I cut a piece of ribbon that was twenty one inches long with a bit of space at each end. I marked spots every three and a half inches, then glued down each arch with heaps of hot glue.

This was set aside for a bit, the glue needs a while to harden and you have to make the headband to mount them on.

I decided to make my headband out of quarter inch wide plastic fabric covered boning. This will serve as a base for everything and was cut to the measurement I decided on earlier (twenty one inches).

On it’s own that would look pretty ugly, so I cut a strip of velvet to serve as a slip cover. The strip was almost three inches wide and twenty two inches long.

Each edge of the velvet was hemmed. I did this by hand with a running stitch because I was too lazy to make a black bobbin for my sewing machine.

Then I slip stitched the boning to the velvet, about an eighth of an inch away from the edge. I did this very quickly and poorly but that’s okay, it won’t be visible later on.

Remember the strip of ribbon with all the arches attached? That gets glued down directly to the boning. I had to use lot’s of glue because these two things don’t like sticking to each other! 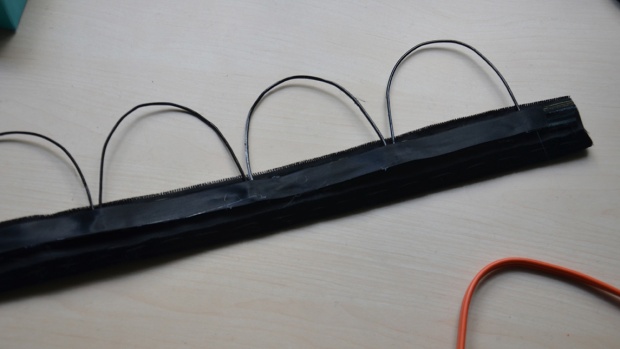 The lower edge of velvet got folded up so it touches the top and hides any ugly bits! I used a slip stitch to sew the two edges together.

Hot glue will not work for this step, sewing it will give you the best results. If you are unable you could try fabric glue and use binder clips to keep everything together until it dries.

When I was sewing I also stitched the two ends together to create a circlet. At this point you have a functional crown with fancy arches – super exciting! Mine was in a really odd shape, so later on I used heat to bend it into something more circular.

I had a selection of beads already out which I was using for embellishing a bodice, but worked fabulously for this crown as well. I also had some cross pendants (from the beading section of Joanns) which I painted black.

I used a heavy duty black thread and strung beads from the base of the arch, to the middle, to the base on the opposite side. Then I went in and attached the crosses to the center of the arch.

I was originally going to embellish the base of the crown but felt it would look messy. Instead I used orange beads, fake pearls, and rhinestones to create little bits that dangled from where each arch meets.

Then I glued butterflies over the join point for each arch, and added a few on the tops of the arches. I used large Ashland nature center feather butterflies for this step, they come in a few different colors and can be purchased at  Michaels. 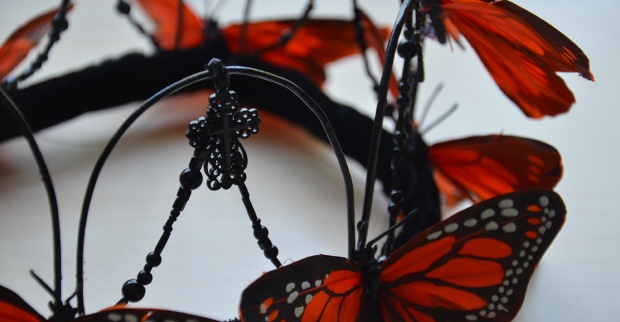 And when worn it’s like so! I experimented a lot with makeup for these photos and I don’t think it worked out to well, but I do like how the crown and bodice look.