I actually attempted to film making this, the key word is attempted. I forgot how bright my desk gets in the afternoon and all the footage ended up too over exposed to bother with. Of course I had to use the camera I usually use for photos to film, which is why I only ended up with three pictures of the process. I wasn’t even going to post about it, but I got so much positive feedback about this on tumblr I decided to make one anyway.

My butterflies were bought at Michaels, they carried a few different sizes, colors, and brands, but I ended up going for the large twelve pack of imitation Monarchs. The ones I picked are by the brand Ashland Nature Center, and thanks to a fifty percent off coupon I only ended spending $6 on them!

These butterflies are made from feathers which have been painted and mounted on plastic bodies. No animals were harmed in the making of this crown!

I also used orange and brown glass beads, wire, a strip of linen, and a five inch piece of beaded trim. The beaded trim was disassembled until I had a pile of crystals and pearls to use for decoration, which is why you don’t see it in the picture below. 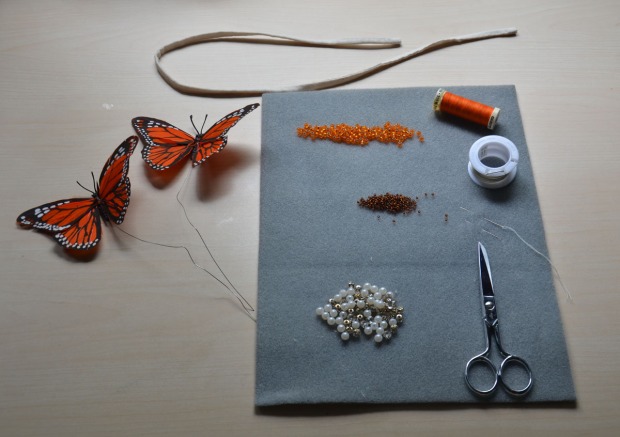 The first step is creating the base of your crown. I did this by measuring my head and adding a few inches – I wanted this to rest pretty low and I planned to wear it with wigs, so it needed to be larger.

Then I cut a one inch wide strip of linen that was the same length. I turned the edges inward and sewed it into a tube so the end result was a 23″ long strip of linen, with all the edges finished. I made mine a little over a quarter inch wide.

I cut a piece of wire slightly shorter the the strip of linen and threaded it through the linen. The cloth covering makes the wire look less harsh and gives a base to sew beads onto, so it’s pretty important!

Once I had the wire in the linen strip I closed the end with thread, and bam, you have a crown – sort of. The shape doesn’t really matter at this  point since you handle it so much during the beading process you’ll have to reshape it anyway.

Then using a very small needle I beaded the thing – I created a lot of dangle bits and tried to create a solid (though not dense) covering of beads over the linen. I didn’t go in a very particular pattern, and it only took me an hour to do. 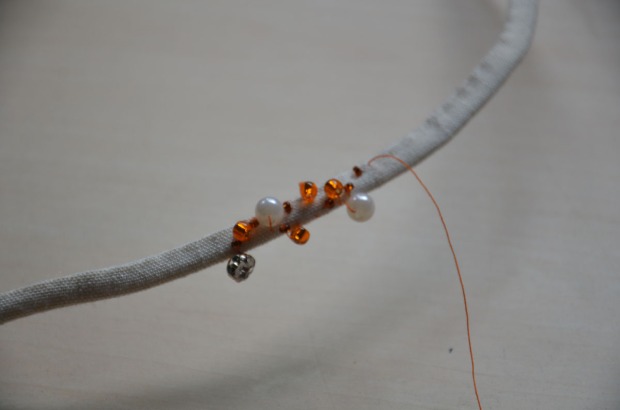 Once  I was finished with the beading I added the butterflies. Since these are made for floral arrangements, they already come with two pieces of wire attached. All I had to do was wrap the wire around my crown, then snip and hide the ends!

So that’s that. Total time was a little over an hour, for me the cost was only $6 since I owned everything except for the butterflies – I think it’s well worth it. Having a butterfly crown definitely makes life a little bit better. 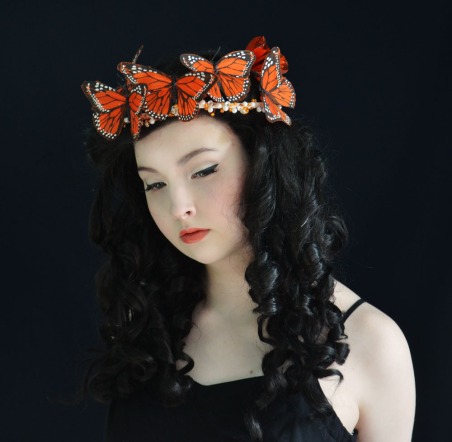 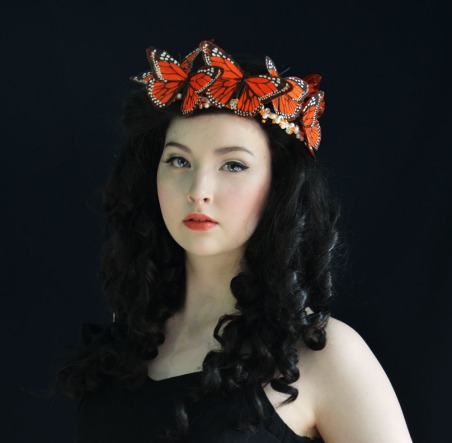